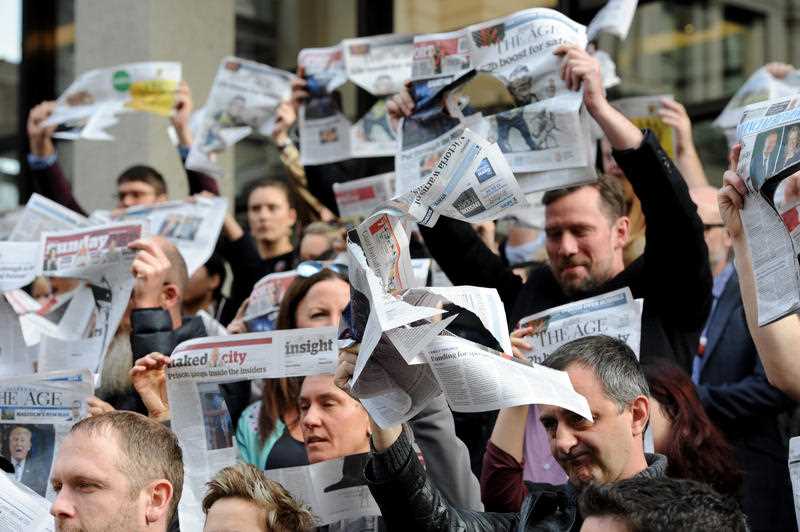 Fairfax newspapers will be substandard today. And their Budget coverage next week will be similarly affected, as their journalists are on a 7-day strike because 25% of the Fairfax newsroom (125 journalists) will be shown the door!

It’s a tragic irony that many of the journalists, who have covered the structural change of the Australian economy since one-time Treasurer Paul Keating embarked on our magical mystery deregulation tour in the 1980s, may well have become victims of his work and the work of the likes of Bill Gates.

And while we’re pointing fingers, you can’t excuse past Fairfax managements, who didn’t embrace new media well, and society’s unwillingness to pay for stuff that they’ve been given free for too long.

On this latter point, free media was what newspapers had to do as a loss leader to keep readers, while they eventually (and hopefully) migrated their customers to their digital platforms. If all this worked out, the media companies planned to reduce their offline offerings (newspapers) but the tightness of consumers in an online world cannot be underestimated.

Also, the proliferation of smaller, well-targeted media start-ups (just like Switzer Daily) has meant there are more competitors for eyeballs and ad revenue. Newspapers once had few rivals and a monopoly over the distribution of news, just as our three TV and radio networks controlled the airwaves. All that has changed.

Of course, Keating had to play ball and copy what was going on worldwide. And many Fairfax journalists in the early 1990s, when even the galah at the local pet shop was talking microeconomic reform, would have been telling readers to put on their seat belt because deregulation and globalisation was going to change your world.

Adding to the mix in that decade was the work of the likes of Bill Gates, Steve Jobs, Mark Zuckerberg and others, who help build and sell “the information superhighway”, as the Internet was often described in those early days.

Now we have a global army of media commentators, reporters and photo journalists, who are all armed with smart phones and laptops and it has made life terribly hard for conventional media.

Even as we await the Treasurer’s Budget on Tuesday, there’s talk that TV stations could be given a deal to cut their fees to ensure that they can keep making a decent buck! And this revelation comes as a recent news article explained how Amazon was about to hurt TV businesses because it was set to take on our local retailers, who are the really big advertisers on television networks!

In this changing world, past Fairfax managers and boards never covered themselves in glory. Need proof? Well just look at the success of realesate.com.au and seek.com.au, which have flourished in the online world, turning Fairfax’s “rivers of gold” (their jobs and property pages with their onetime, huge revenues) into a virtual drought-ravished desert.

You’d like to believe that a lot of my friends and the smart people from Fairfax, who I interview on my radio and TV programs, and who now have lost their jobs, will find alternative work.

That said, they are victims of ‘progress’ or at least the passage of time and the change it brings.

I love my daily newspapers and I especially love them when I’m trapped on the tarmac in a delayed plane, which means I get to read my precious source of news from front to back. But I’m in a shrinking minority and I saw the worrying signs with my sons years ago who didn’t rush for the daily newspaper when they got up in the morning.

They had self-designed digital ‘newspapers’ made up of favourite websites that gave them what they wanted. This told me that newspapers were on death row. Now the talk is that more than one daily newspaper in our capital cities could soon become a distant memory.

And things have got worse with the likes of Facebook, Twitter, Linkedin, Instagram, Netflix, BuzzFeed (and too much more) all making the lives of old world media harder by the day.

When deregulation was first promoted by the likes of Paul Keating, it was always linked to the fact that it brought competition, which delivered productivity and a bigger economic pie.

And to be fair, as an economy since deregulation, globalisation and the Internet gatecrashed our lives, the Australian economy has grown for over 25 years without a recession. However, along the way, workers in the textile, car, footwear, printing and so many old world industries have lost jobs, as others benefitted from a changing world.

Before all this, smart students wanted to be doctors or lawyers. Now they want to be foreign exchange dealers, computer programmers like Mark Zuckerberg or entrepreneurs like the two Aussies who started the Nasdaq-listed Atlassian — Scott Farquhar and Mike Cannon-Brookes.

I wish the people leaving Fairfax luck in this changing world but as I see things happen that I expected, given my position in business and media, I recall the words of David Sarnoff, the US ‘father of broadcasting’: “Competition brings out the best in products and the worst in people.”