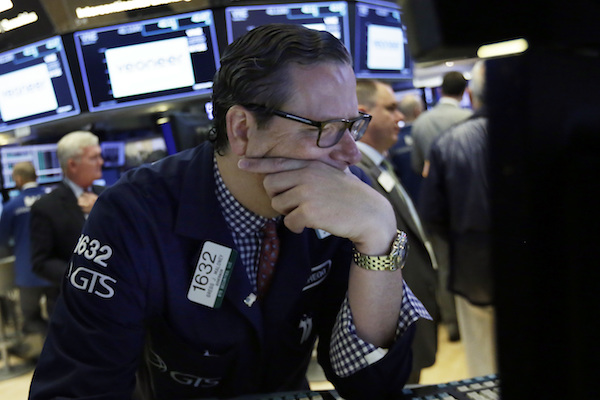 Experts think this trade war will be a fizzer. I hope this courageous guess is right

One of the staggering developments from the mad money world of stock markets is that US stocks rose overnight, with the Dow Jones index up over  180 points, as the deadline to President Trump’s trade war looms today. And what’s even more surprising is that some professionals reckon the market has priced in the effects of a trade war!

Gee I hope they’re right, but I don’t know how I or anyone could really test that.

This confidence that market experts know what lies ahead was captured by this from Jeremy Klein, chief market strategist at FBN Securities: “Any news we get on trade in the short term will be neutral or good,” he said. “We already know all the bad news that's out there on this issue.” (CNBC)

What he’s saying is that experts on the significant companies affected by a tit-for-tat trade war have worked out the profit effects of tariffs and then changed their valuation on that company. But those calculations operate off assumptions that might end up being wrong!

This is how the trade war should begin, with a U.S. Trade Representative statement saying tariffs on $34 billion of Chinese goods will take effect at 12:01 a.m. in Washington. Then China will return fire immediately. The assumption is that China will hit back with equal force. But what if they don’t, instead hitting harder than expected and on industries that were not expected to be affected?

All’s fair in love and war. And you can’t expect that a trade war will be fought out following some gentlemanly rules of engagement. Mind you, I hope it is, and I also hope the market experts have calculated the effects accurately. But I always argue that hope is not a strategy upon which you can build wealth in the stock market!

What worries me about this complacency on the trade war is that it comes when the doomsday drones are ganging up to ramp their warnings about an imminent recession and stock market sell off.

You shouldn’t be surprised about this, as since the end of the GFC this mob has tipped a Great Depression, countless market crashes and some have even had the Dow Jones plummeting below 10,000 while it’s now over 24,300!

Donald Trump has been seen as the trigger, with this one from Bloomberg showing how the negative nervous Nellies have been scaring us for some time: "Citigroup: A Trump Victory in November Could Cause a Global Recession!"  (Bloomberg Financial News headline, August 2016)

And then this one: "A President Trump Could Destroy the World Economy!” (Washington Post editorial, October 2016).

Then there have been the likes of Harry Dent and Marc Faber who have been tipping a market Armageddon for at least three years, probably longer. These guys will get it right one day, after being wrong for a long time. And this trade war could be the trigger for them being free to boast about their insights.

All this comes at a time when investor surveys show that those playing the stock market are losing confidence. And some well-known fund managers have expressed their concerns about being long stocks, with the likes of Bridgewater Associates’ Ray Dalio saying he’s getting out of financial assets.

“It’s a classical late cycle story. So, when I was here last time, I said we were long and nervous. We are no longer long, we are increasingly nervous about this,” Roelof Salomons, chief strategist at Kempen Capital Management, told CNBC’s “Squawk Box Europe” on Thursday.

A late cycle represents an economy that has been growing, but is poised to fall into a recession, amid rising interest rates, lower profit margins and other negative economic headwinds.

And a trade war could be a cyclone, while the experts are treating it more like a zephyr. I’m gambling that these guys and their assessments are right because I think the current economic and corporate profitability stories are so strong. But I know I’m gambling.

If you can’t afford to gamble and see stock prices slide, then you might have to play it safer than me. But let’s all pray that this trade war doesn’t prove some Trump-haters right.

Here are some of the worst predictions that I can’t forget:

• “Under Trump, I would expect a protracted recession to begin within 18 months. The damage would be felt far beyond the United States.” Larry Summers, former chief economist to Bill Clinton and Barack Obama, June 2016.

• “If the unlikely event happens and Trump wins, you will see a market crash of historic proportions, I think. … The markets are terrified of him.” Steve Rattner, MSNBC economic guru, October 2016.

• “It really does now look like President Donald J. Trump, and markets are plunging. When might we expect them to recover? We are very probably looking at a global recession, with no end in sight.” Paul Krugman of the New York Times, the day after the election.
This damn trade war could rescue these guys reputations. And because I don’t know what a trade war might create, I can’t tell you these people will remain looking like dopes!