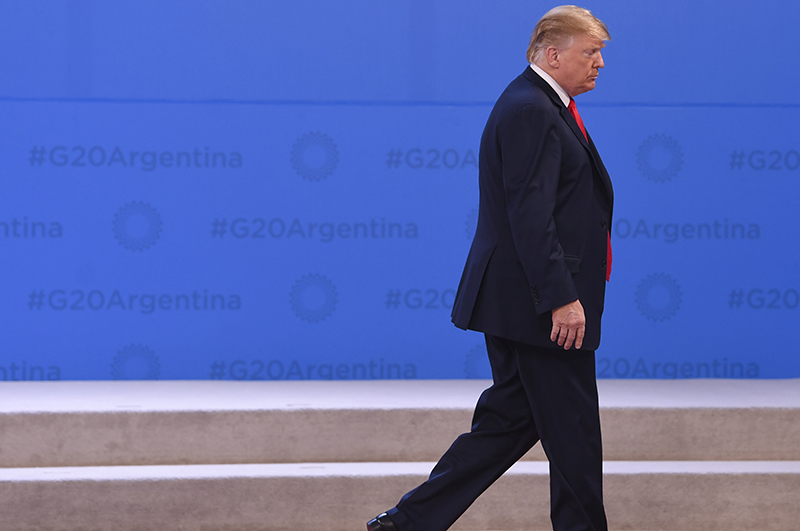 Dow down 800 points. Has Donald kicked the hornet's nest?

“I just want you to tell me when I have to get out of the market.” I heard this when talking to a guy called Peter at my office last night, where we put on our first ‘money’ education class. And those words came back to me when I saw the Dow Jones was down over 800 points overnight!

When I tuned in, the Dow was off 696 points, which forced me to think: “Have I underestimated the current sell off and is what I thought was a correction really the start of a crash?”

Along with the negative question of “should I get out of stocks and tell everyone or should I see this as another buying opportunity?’

This has been a pretty scary year and could be described as the year when the President kicked a hornet’s nest. And while he’s done this a few times since his presidency started, the current question is “Has he done it one too many times?”

After telling my readers here, my subscribers to the Switzer Report and my TV and radio viewers and listeners, as well as my financial planning clients, to keep the faith with stocks on countless sell offs since March 2009, I know the recent stocks slides are more dangerous because we’re near the end of the stock market cycle, however, no one rings a bell for all to hear. You either get out early and hope it’s not too early, or wait until you’ve lost a bit, like now, and get out before a big leg down. Or you gamble that this is a correction and maybe buy at the bottom of this possible correction and make nice money.

Until this morning, I had little doubt that the latter scenario was the right one because the economic story in the USA and worldwide said a recession is more likely in 2020 or beyond rather than 2019.

The trigger for this fall overnight was the fact that the USA/China trade war has only been put off for three months, so we have to hope Donald Trump and Xi Jinping are going to be fair dinkum about solving this threat to economic growth, not only in both countries but worldwide.

And it’s no surprise that the biggest cause for this sell off was something that normal people might not understand. In economics, it’s called the inversion of the yield curve and it happened overnight when three-year government bonds became higher than five-year bonds.

Bonds have a set rate of interest on them when they are issued but when the bond market thinks times are going to be economically worse, they chase high interest rate bonds, driving up their price (rising demand does that). But because they might pay $110 for a $100 bond, it drives down the effective return or yield on that bond.

If you don’t understand this, forget it. Just remember, if the bond curve inverts or slopes down from left to right, the stock market worries that it’s predicting a recession. And that’s why the Dow was down over 800 points at one stage overnight.

Let’s look back at the stock market year-to-date from the point of view of charts and try to piece together why it has been a pretty disappointing year. Undoubtedly, the gutfeel reason most of us would advance for the Dow Jones rising only 1.6% is Donald Trump and his trade war but there were other issues. Meanwhile, our S&P/ASX 200 being down 4.7% has the fingerprints of Donald on this ‘robbing’ of our wealth but, once again, there were other reasons.

But to recall the year, let’s check out the charts.

I think you can see the pattern suggests that common causes have overwhelmingly influenced both stock markets.

• Late March to early April (down).

• Trended up June to late August.

Let’s track the ups and downs of the stock market on a calendar basis. CNN put it aptly with this headline: “February was an insane month for the stock market.” In fact, it was the wildest month since 2008 and the GFC.

“The Dow plummeted more than 3,200 points (or 12%) in just two weeks. Then stocks raced back to life, at one point recovering about three-quarters of those losses,” wrote Matt Egan at CNN.

“Fittingly, February ended with more drama. The Dow tumbled 680 points during the month's final two days, leaving it down about 1,600 points from the record high in late January.”

The cause then was a fear of an overheating US economy, given extra oomph from the Trump tax cuts, which pushed up bond yields as inflation fears got out of hand.

Our market followed suit but our fall was not as great, as we didn’t have the same growth/inflation/interest rates threat to deal with and the Royal Commission into the finance sector had not taken centre-stage.

That changed post-March, with market smarties taking the revelations from the RC and reworking what bank share prices should be. From March to June, the CBA lost close to 13% and as financial companies make up 32.4% of the S&P/ASX 200 index, it’s little wonder our stock market has had difficulty fighting gravity.

On March 22, the White House announced tariffs for $US50-60 billion worth of Chinese imports into the USA. This followed a 30% tariff on Chinese solar panels. On the same day, tariffs of 20% were placed on washing machines for the first 1.2 million units imported during the year. In 2016, China exported $425 million worth of washers to the United States!

On April 2, China returned fire imposing tariffs on 128 products it imports from America, including aluminium, airplanes, cars, pork, and soybeans (which have a 25% tariff), as well as fruit, nuts, and steel piping (15%).

So the Yanks had inflation and trade war concerns hitting its stock market and we had the trade war and the RC pummelling our market. (Check out the charts above to see all of this portrayed graphically.)

The trend up from June to late August was driven by the combined positives of good news on the economy and company earnings. Both were stronger and more convincing in the USA and proved useful in fighting the negativity of trade wars, the RC and other headwinds but Wall Street looked increasingly more expensive and the trade war was starting to raise questions over sales of tech stocks and their very valuations appeared unsustainable.

September to November saw the accumulation of headwinds, which formed a virtual hurricane that blew Wall Street way off course and we had no offsetting good news to save us from the storm.

Here’s a list of the drivers that have pushed US and Aussie stocks into correction territory:

• Talk of escalation of the trade war when President Trump openly talked about slamming all $US500 billion of Chinese imports into the States with a tariff.

• Fear that the Fed would raise interest rates too quickly.

• The likes of Goldman Sachs lowered its economic growth forecasts for 2019 to the low 2% from rates above 3%.

• China talked about tariff retaliation while its economy slowed down to 6.5% and most forecasters see it going lower.

• The market took a set against FAANG stocks, which at one stage of 2018 were responsible for 85% of the growth of the S&P 500! Between October and November, Apple’s share price fell over 25%! Amazon was down 26% September to November!

• Commodity prices have been falling, with oil down 46% from October 3 until recently. Since November 19, the iron ore price has dropped 15%.

• All these external issues have dogged our stock market but we’ve had the Royal Commission’s continual drag on bank share prices, the credit crunch from banks playing harder ball with loans since the RC and the demands of APRA. And to make matters even worse, there is house price collapse talk, which looks over-hyped but still isn’t helping confidence in the housing sector.

Both charts have shown a recent kick up and that has been linked to the trade war truce talk, following the meeting in Argentina after the G20 get together. Also helping has been the Fed boss, Jerome Powell, indicating that he’s not keen to raise interest rates too quickly, if the US economy doesn’t warrant it.

Making markets more nervous was a downgrade from Morgan Stanley’s Ravi Shanker (yep, that’s his name!) of FedEx and UPS because of competition from Amazon. A fall in transport stocks often runs ahead of an economic slowdown but this does seem to be more a competition thing rather than a lack of general economic demand.

One other ‘spook’ factor had Donald’s fingerprints all over it. Yesterday, his economic spokesman, Larry Kudlow, said the truce starts on January 1 but the White House, read Donald, corrected that, telling us it started on December 1! Uncertainty (which Donald uses generally for his advantage in negotiations) really upsets stock markets. I hope he hasn’t kicked Wall Street’s hornet’s nest one too many times.

I still think this is a correction but I have less certainty today than I had last night in my market education class!