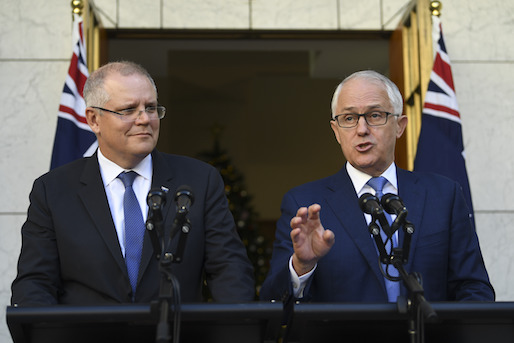 Don't do it Malcolm - you have to be better than that!

Malcolm Turnbull and Scott Morrison are on a roll, with the economy set to be their greatest chance to win next year’s election. However, the latest Deloitte Access Economics quarterly business snapshot warns that their planned “battlers’ budget”, though looking politically attractive, would be a huge economic mistake.

Chris Richardson, the chief economist at Deloitte, is warning the Government not to make the mistakes made by previous governments of caving in on sound economic policy to simply win an election.

He fingers Labor in 2013 with spending giveaways and John Howard in 2007 with tax cuts pre-election. He says if this is tried again to lift the Government’s standing in the polls, it would be a big mistake. “Here we go again, a government lagging in the polls looks set to leave behind a poison pill,” Richardson lamented.

Interestingly, the latest Sky News/ReachTel poll of the year showed the Coalition's primary vote rose one point to 34%, while the Opposition held steady at 36%.

The two-party preferred vote was to 52% for Labor versus 48% for the Government, which was a slight improvement, with some ‘experts’ asking why the improved job market hasn’t helped the Government’s popularity even more.

As per usual, Malcolm remains the preferred PM over Bill Shorten, with an 8-point lead. Some 54% prefer Malcolm, while 46% are in Bill’s corner.

Another aspect of this poll, which could explain why the Treasurer is contemplating a battlers’ budget, is the results to the question about whether big business should get a company tax cut.

The question asked was whether big business should get a tax cut from 30% to 25%, but it was misleading.

But this tax cut does include a lot of businesses as the turnover to get this lower tax rate is $25 million or less. And next year it will apply to those with turnovers less than $50 million!

Deep down, the Government wants to get all companies on a 25% company tax rate to mirror what Donald Trump did in the USA. In the short-term, it would improve consumer confidence, boost spending and create jobs as well as drive economic growth higher. And this would be a great for the PM’s re-election goals but Chris Richardson says it's a “poison pill” that would undermine the Budget’s repair, put pressure on interest rates to rise and leave Australia vulnerable when the next recession comes along. This is because we might not have a budget surplus because Malcolm wanted to be re-elected, just like Prime Ministers before him.

In reality, if tax cuts really produced a big jump in economic growth, it could result in so much tax collections and a lot less spending on the unemployed that the Budget could actually roll into surplus but that’s a huge gamble that Richardson thinks Malcolm shouldn’t take.

In a better world, the PM would stand strong and give the tax cuts when the Budget justifies it but that would take a leader of enormous self-belief and one who really has the country onside.

I believe in tax cuts eventually but maybe we should let the improving economy take root this year, see the budget deficit really fall, watch the PM win next year’s election and then think about those tax cuts when we can afford them, which might be a nice gesture for our children and our children’s children.

Do you reckon a politician would buy into this dream?