Don't be scared of the stock market. Beat it at its own game!

Lately I’ve been catching up with my financial planning clients and while the range of returns have been between 6% plus to over 11% (depending on the appetite for risk my clients have), one couple who have about $3 million in their super fund, only wound up with a 1.5% return!

I had to ask these delightful people: “Did you put my advisor/colleague in a headlock to go so conservative?”

The husband fessed up, admitting that despite the fact he reads my stuff daily, he really expected a big market sell off this year!

I must admit I understand why a retired couple with $3 million in super would want to protect that money. However being too much of a scaredy cat actually creates more scary outcomes than many would expect.

I said to my clients that I want to create a portfolio of assets that should be able to deliver about 5%. And after franking credits are added in, that number could creep up to 7%.

That means if my clients had succumbed to Switzer rather than their own fear, their income for 2019/20 would have been $231,000 rather than $49,500! That’s a big price to pay for being scared and very conservative.

After a bit of convincing, I was able to suggest to my clients that we could create a portfolio that would deliver 5% plus franking, but I also said you have to accept that your capital will go up and down. However, the pay off will be a reliable stream of income that even a GFC-type crash wouldn’t reduce by much. The portfolio behind that income will be important and the more recession proof the business, the better.

I looked at 15 stocks that Contango portfolio manager, Shawn Burns, has in my listed Switzer Dividend Growth Fund (SWTZ). I then looked at what happened to the dividends for these stocks over 2007, 2008, 2009, 2010 and 2011, when the GFC took the stock market down 50%. I will give you the totals over those years:

These numbers assume you only had one stock of each of these 15 companies.

You can see that while the GFC was mainly in 2008, it was 2009 that really hurt dividends but if you average out the five years 2007-2011, the dividend flow of income came in at $13.98, which means the GFC over a five-year period didn’t have an income-killing effect on someone who was prepared to see his or her capital go up and down. And remember, I haven’t added in the positive effects of franking credits!

Investors have to understand that with term deposit rates so low, they’ll have to go up the risk curve to get their precious 5% or more.

I know 5% is seen as the ‘precious rate’ for a term deposit. Even when that rate prevails, the inflation rate is probably 3% but retirees don’t seem worried about that, even though they should be.

Because we’re living longer, investors/retirees have to get used to the ups and downs of the stock market. If they load up on dividend-paying stocks plus franking credits, they can actually ‘bank’ income that can add to their capital.

What do I mean by that?

Let’s assume you have $1 million in your super fund and you can live on $50,000 a year. If your investment strategy consistently gets 5% plus 2% for franking credits, you’re pocketing $70,000. That means you gain $20,000 a year over what you need. You can bank this extra return into a buffer account for the GFC-style times. This buffer can make up for when your dividend-income drops to say 3% for a year or 5% thanks to franking credits.

Over time, as my example shows, the averaging of dividends shows a pretty constant supply of income is possible, despite the kind of challenge that a GFC could deliver to stocks and the people who own them.

I often say this chart below is my favourite chart, when it comes to why I like stocks. It shows that $10,000 invested in stocks in 1970, would roll over (with the reinvestment of dividends) into $453,166 by 2009 — one year after the stock market collapsed 50% because of the GFC!  The portfolio involved would be like an exchange traded fund (ETF) for the S&P/ASX 200 index — our top 200 listed businesses, which would be more growth-oriented rather than income-delivering. 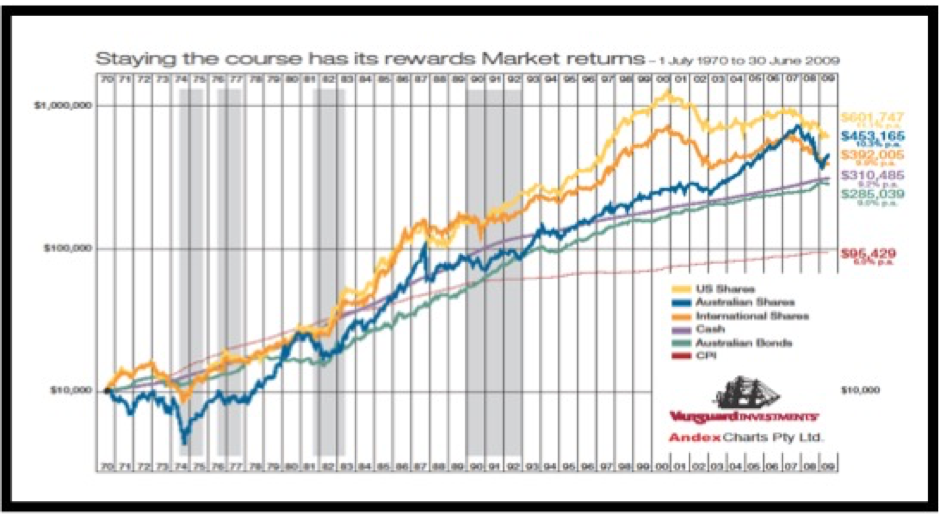 An ETF like this is expected to deliver 10% per annum over a decade, despite two or three years of absolute shockers for stocks. And half of these returns is tipped to be dividends. That’s why I like the idea of stepping up your acquisition of stocks that are big dividend-payers.

You would get less capital growth upside in boom bull markets but you’d get a steady flow of reliable dividends plus franking credits.

This is a defensive strategy that could be a nice income provider for scaredy cat investors/retirees. But they’d have to learn to sleep when their capital cops it in a GFC-style crash. How could they do that? Well, that would come from their income reliably showing up year in, year out.

Of course, future history could surprise us but history as it now stands says my passion for dividends isn’t a dumb strategy, provided you can learn to live with the ups and downs of the stock market. That said, have a look at the chart and the blue line for Aussie stocks — despite those crashes, the uptrend resumes crash after crash after crash.