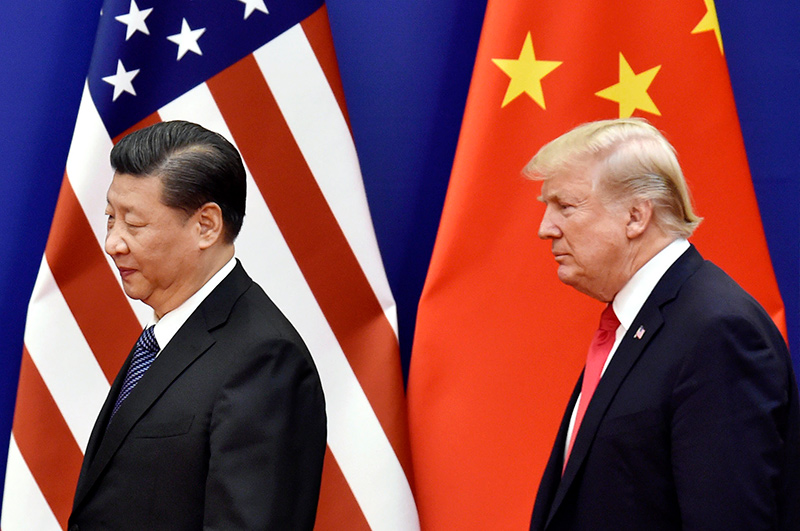 The ‘gift’ madness of Donald Trump seems to have worked again and it makes me think about China and how stocks could surge before Christmas! Yep, the Dow spiked around 250 points overnight before the close on the news that Mexico and the USA had struck a trade deal! And it comes as one expert believes that the China-Trump trade war is about to hot up because both sides think they're winning. Imagine what will happen to stocks if the opposite happens!

And one thing these little trade tidbits (which lead to a surge in stock prices) prove is that while Donald might have had method in his tariff madness (and it might work for the USA to get needed concessions from trading partners that were having a lend of the Yanks), the tactics have hurt the stock market.

Last week there was news of a China trade meeting with Trump’s team and up went Wall Street. Again this morning with Mexico, and buyers stepped in on cue. It says this trade stuff has hurt stocks.

I occasionally get bagged for being critical of Donald by people who love what he stands for. They threaten to cancel their subscription to my investment newsletter, The Switzer Report. This Report has had a great record of tipping winning stocks and suggesting money-making strategies, but they want to cancel purely because I dare to criticize the guy! They have never complained about the Report’s recommendations but they don't like me being critical of Donald! It shows me that Trump fans perceive this guy as a special messenger from political ‘heaven’ and if you dare criticize his unusual ways that hurt stock prices and take away wealth, you’re seen as a bleeding heart leftie.

The same happens when I don’t agree with a Labor policy or two. The accusations are that I’m a right-wing business type, despite the fact that I’ve ripped into the Turnbull Government when I think they’ve got it wrong. The super changes are a case in point.

I was brought up in a less tribal media world, where you can exert (as best you can) your mental powers to try to be objective about economic policies, keeping in mind the collective good of the country. It’s always hard to get rid of bias, such as government interference, which is often too late, too hard and driven by political fear rather than enlightened analysis. Hey, but that’s politics.

Back to the starter story down Mexico way and, as CNBC explained, the certainty of a new trade deal “potentially removed a source of uncertainty that had been plaguing investors for months.”

The Nasdaq broke through the 8000 level for the first time, with the likes of the FAANGs — Facebook, Amazon, Apple, Netflix and Google (Alphabet) — having a great day at their ‘offices’.

And if Mexico can do this, imagine what a China-USA trade deal could do for stock prices!

This trade black cloud has been putting headwinds in the way of stock prices but if Donald can crack a deal with China before the mid-term elections, then we could see a huge rally rolling into the end of the year.

“The market has been buffeted with a lot of headwinds lately, and the biggest one is trade,” said Art Hogan, chief market strategist at B. Riley FBR. “If you were to take trade out of the picture, you would have a smoother ride higher in this market.” (CNBC)

The deal replaces NAFTA with The United States-Mexico Trade Agreement, which the President says is good for farmers and manufacturers. And you can see how this all fits into his mid-term election strategy, at a time when a lot of people in the USA would like to see him become a lame duck President with no Congress clout and eventually be impeached!

This is a huge trade war bet for Donald to get some concessions from trading partners to improve US trade balances and for him to get some political peace in his life.

But China is the big kahuna for Donald that could make or break stocks over the rest of the year. Unfortunately, Deborah Elms, the executive director at the Singapore-based Asian Trade Centre, thinks the entrails aren’t giving her positive readings.

“I think we are in for a prolonged period of continuing escalating tensions,” she told CNBC. And she explained why, stating that “both sides think they have the upper hand in this debate.”

You have to hope Deb is wrong on this subject. At least one thing I’ve learnt watching Donald daily is that it never pays to believe that you understand this guy. No one has his kind of method in his madness. No-one!

The next step in this battle between the two biggest economies in the world is a $US200 billion upping of the ante of tariffs on Chinese goods later in the year. This could break stock market willingness to play along with Donald and what they hope is a game of bluff that ends in concessions from the Chinese.

The trouble for China is that the US doesn’t even export $US200 billion worth of goods to China, so how the Chinese responds adds to uncertainty and stock markets hate that.

I suspect before a trade deal happens and stocks surge on such a deal, there are going to be some Trump-a-minute thrills and spills for stocks, which could be a buying opportunity for the adventurous. This could especially be the case for some of the big name Chinese stocks, such as Tencent, which have been trashed since this trade war talk has hotted up.

Donald is a one in a billion gift or curse. Time will tell.