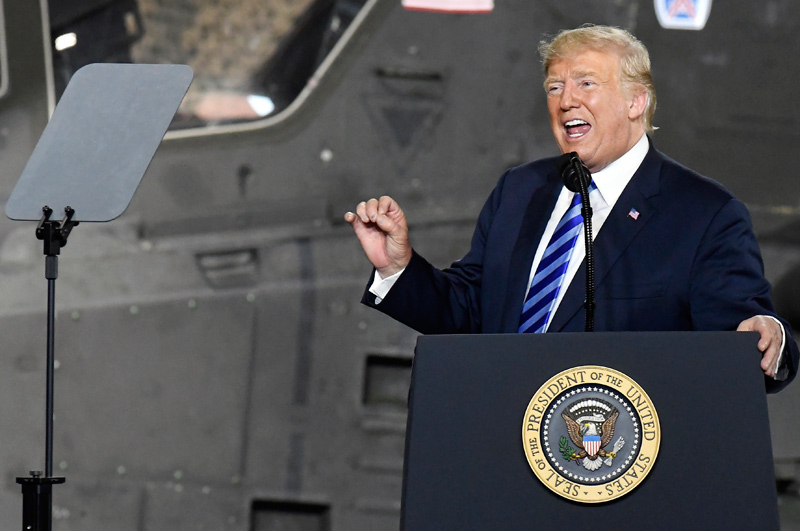 Donald does it again but can he keep it up?

Anyone who’s a Donald Trump fan and would like to excuse him from having any negative impact on anything should look at what the Dow Jones index did overnight. One of the first things I do when my alarm goes off, at an ungodly hour, is check out Wall Street. I had to rub my eyes when it was green on the screen, not red, with the Dow up over 400 points!

That pretty well told me that the most important story of the morning for me to convey to you was going to be out of the stock market. As I couldn’t imagine there was a company profit report or an economic reading that could excite share players, I thought it had to have Donald’s fingerprints all over it.

Sure enough, it was good Donald, who came to the table of international politics and Wall Street liked it. You know the good Donald who loves his friend President Xi and his old mate Vlad Putin and his tweets have recorded the work of good Donald.

And yes, so has Wall Street, with his tax cuts, his reduced regulation and his inducements to bring US big company profits hiding overseas back home.

On the other hand, his tariff and trade war ‘negotiations’ (if you can call them that rather than strongarm tactics) have been like a red flag to a bear, rather than a bull. And US stock markets have led global markets down whenever he upped the ante on his demands, especially with China.

And that’s where last night’s stocks spike came from, with the headlines telling us that there was, as CNBC put it, “… renewed hope that a resolution to a trade dispute with China could be on the horizon.”

Later this month, China and the President’s team will sit down again and try to come up with a better option than a trade war, which is why US stocks marched higher. Our local market is bound to play follow the leader today.

This is a critical move. After this next meeting, we’ll see what Donald’s mid-term elections play is. Though the US President and his ‘outside the square’ thinking could deliver many wild and wacky alternative strategies, there are two obvious reasons for his tariff spat. The first is to be seen as a tough negotiator with China, where he has won concessions on trade that no other US leader has come close to achieving. That’s the look that has come out of his win over the Europeans.

The second outcome doesn’t bear thinking about, with Donald effectively nuking the Chinese on trade, leaving him looking like a gutsy, no-nonsense, Commie-kicker, which was a pretty popular image in Cold War USA of the 1960s and 1970s. And don’t forget a lot of Trump’s true believers are old-fashioned Americans in manufacturing, farming and full on religion, who mentally are still stuck in the thinking of decades ago.

A “good old boy” war, even if it was only a trade war, could make Donald look tough and could help the Republican vote in the November mid-term elections. However, that option won’t wash with Wall Street, which fortunately has progressed with the times. Donald might be willing to give the pinstriped brigade a few heart-stoppers while he does his negotiating but he’d prefer the option A script for the run-up to the mid-terms, which reads as “get the Chinese to give us some real trade gains, make me look tough and influential while ensuring that Wall Street takes the stock market higher”.

Option B of starting a trade war and seeing the Dow down over 10% before the mid-terms is a huge gamble for the President. And even though he is a former casino owner (which, incidentally, practically bankrupted him), I don’t think he wants to put his chips on this high risk bet.

I’ve noted a more sensible side to many of Donald’s wilder plays since he hired his new National Economic Council Director, Larry Kudlow, who used to be chief economist at Bear Stearns when it was a respected investment company and was a host on CNBC’s TV line-up. Larry would be a good monitor of what Wall Street is thinking and he’s surely letting Donald know just how far he can go before the stock market brings him undone.

Remember, if he screws up and the Republicans get blamed and lose lots of seats, he ends up as a lame duck President.

Two companies that did well overnight were Boeing and Caterpillar, companies that earn a lot of their revenue overseas. A trade war with China doesn’t improve their bottom lines prospects.

Of course, you can never get too comfy with good Donald but I really hope he can keep up this more positive and helpful stance for trade and stocks, though I guess recent history tells us that there could still be some anxious moments ahead, before we get to the starting line for the mid-term elections.

By the way, Wal-Mart did report well, which is a plus sign for the US economy. That did help the Dow make its 396-point gain overnight but the China story was the most important driver of market optimism.