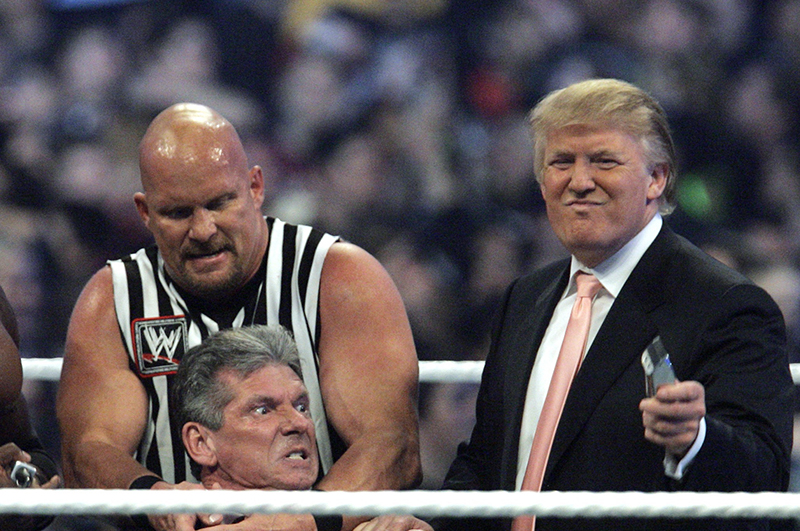 Donald Trump continues to thump our stock market with another curve ball, other than his usual China tariff trade war one, thrown to spook Wall Street. The latest involves his Deputy Attorney General, Rod Rosenstein, who might soon be shown the revolving door at Donald’s White House.

CNBC ran with the headline “Dow drops more than 150 points on fears Deputy AG Rosenstein is leaving.” The guy stands accused via reports in the New York Times that after the President sacked James Comey as F.B.I. director, Rosenstein discussed the possibility of wearing a wire to secretly record Donald, to eventually invoke the 25th Amendment.

For non-US Constitution experts, the fourth section of the 25th Amendment provides a multistep process for the Vice President and cabinet officials to declare that the President is “unable to discharge the powers and duties of his office.”

This was a big call and the word on the street is that he meets with his boss on Thursday, so stock players are bracing for the fallout, as another important political player is given the heave-ho by arguably the most unusual President ever!

At the moment, Axios has reported that Rosenstein will resign but NBC says the opposite. The Deputy AG has copped a roasting from the President in the past over his Russian probe into electoral interference. It doesn’t look good for Rod and the stock market is nervous but this isn’t the only reason for markets getting jumpy.

If he gets the bullet, there could be a negative implication for the Republicans in the mid-term elections in early November. The incident adds to uncertainty and financial markets hate that and it usually leads to stock sell offs.

The Trump-v-China trade war refuses to cool down and as it hots up, stocks will feel the heat. Right now, the optimists are hoping round two of the heavyweight economic contest between the world’s champion economy — the USA — and the contender in China will be enough to please the US President but he doesn’t seem to want a points decision, he wants a knockout!

Today’s return fire from the Chinese is about accusation that Donald is bullying them. And this follows the recent 10% tariff levied on Chinese goods worth $US200 billion going into the USA. The Chinese came back with tariffs on $US60 billion worth of American goods.

In what might be seen as a measured get even, the Chinese released a White Paper accusing the US of damaging the economic relationship between the two countries and threatening world trade.

Fairfax this morning shows the US is starting to make inroads into its trade with China. “The White Paper argued that US exports to China are growing faster than America's global exports, with US exports of goods to China worth $US129.89 billion in 2017, an increase of 577 per cent from $US19.18 billion in 2001, and higher than the US export growth of 112 per cent. Ministry of Commerce data showed that last year Chinese tourists spent a total of $US51 billion on travel, study, medical treatment in the United States.”

All the tit-for-tat tariff stuff is acceptable for the market but it’s what lies ahead that could put a dam wall against this rising tide for stocks.

The 10% tariffs on $US200 billion worth of Chinese goods starts today in the USA. If Donald doesn’t like China’s response, the tariff slug grows to 25% on January 1. This gives the Yanks time to do their mid-term voting and get a nice big Christmas shopping period out of the way before prices rise in American retail stores!

And these Trump tariff tactics have been set to possibly apply to another $US267 billion worth of goods next year, which means the grand total of tariff-slugged Chinese goods will be $US517 billion. This represents all the goods that currently go from China to the States!

If this happens, Wall Street will have a hissy fit and yep, we’ll feel it big time on our stock market. Our super returns, which have been exceptional coming in at 10.7% for the median balanced fund, will have difficulty doing that again next year, if this trade war is escalated Trump-style!