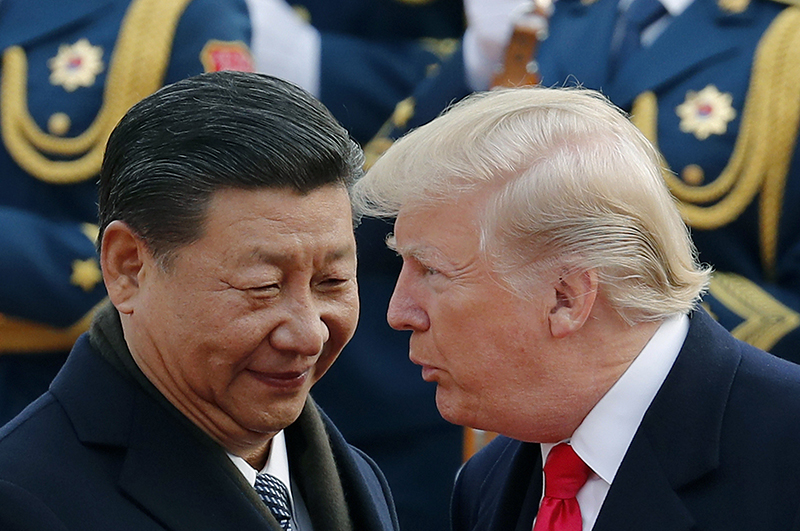 Donald and Xi Jinping, I'll be watching you

I know you think there are important things going on in your life and undoubtedly there are, but they have to be kept in context with a hugely crucial meeting this week in Japan between the two most powerful men in the world: Donald ‘the tweeter’ Trump and his “good friend” China’s Xi Jinping.

If this get together wasn’t so potentially impactful on our lives, I’d see this whole Donald-Xi bromance as a satirist’s gift from comedy heaven. But it’s too important to be flippant for simply a laugh.

Obviously, it’s OK for the ABC’s Shaun Micallef to poke fun at it all with his usual amusing style. However, for an economist like me with over 50 staff, financial planning clients, Switzer Report subscribers (who are self-directed investors), I’m not going to do comedy routines when it comes to matters of gravitas like this. And as an Australian who hates spikes in unemployment and bankruptcies, I want this trade war done and dusted.

This meeting in Osaka, Japan, is a chance for that to happen. Of course, life with Donald has taught us not to expect the expected, so this will be a week of nervousness.

Stock market players, central bankers, political leaders, business leaders (who want to invest and those who are currently suffering trade war challenges and want a break), as well as savers (who don’t want interest rates to fall further) should hope Donald and Xi emerge from a likely dumpling dinner arm-in-arm some time on Friday.

If you want to know that jobs or job security are coming, your super balance won’t be shrinking and house prices falls don’t speed up again, then you want a trade war conclusion ASAP.

You see, hanging out there as a possibility is that Xi and his team will annoy Donald with their negotiation demands. As a consequence, he’ll show that he won’t be played in public so he could opt to impose tariffs on the additional $300 billion in Chinese imports that go into America without a tax slug.

This trade war is a big deal. It’s hurting China’s economic growth. And China is our most important export customer. An end to this China-Trump torture would help our economy, job creation, business growth and so on. You see, it really is important and worthy of your attention, unless you’re someone who may be Zen-like so you refuse to worry about things you can’t control.

Generally, I contemplate big economic issues for money-making or money-saving reasons. I recently reflected on what Andrew Ross Sorkin said to Tim Ferriss in his book Tribe of Mentors.

Andrew Ross Sorkin is a columnist for The New York Times, co-anchor of CNBC’s Squawk Box, author of Too Big to Fail and co-creator of Showtime’s Billions. Yep, he’s talented. When asked for a quote that gives him strength or peace, Ross Sorkin referred to a line in the film Bridge of Spies. A character (played by Tom Hanks), who was held for being a spy, was asked if he was worried. He replied: “Would it help?”

Any time I find myself obsessing about something, I ask myself that fundamental question. Sometimes obsessing actually does help because you need to think through something important. But most of the time, it’s just a bad time suck.

I think it’s good advice for many uncontrollable life challenges. However, being mindful of some event that could hurt your super balance, kill your business, end your job or maybe devastate the equilibrium of a loved one, could be useful.

For example, if I was sure Donald was going to cause a huge stock market sell off by ramping up the trade war, then my sharing of this could mean someone might cash out of stocks and avoid losing 20% of their money invested in shares.

That’s important and it’s why I do what I do each morning. Mind you, I don’t think something like this will happen but I’m not infallible and Donald and Xi aren’t the easiest people to read.

I’ll be surprised if a deal is done on Friday but gee I’d love it if it happened. Stocks would surge, consumer and business confidence would spike, the number of interest rate cuts would be reduced and world economic growth would be marked to go higher.

CNBC talked to Evercore ISI strategist Donald Straszheim, who said there are three potential outcomes from the Trump-Xi meeting: “First, the U.S. agrees to hold off on slapping additional tariffs on Chinese goods for an indefinite amount of time. Second, the U.S. holds off on additional levies for a fixed amount of time. Third, the U.S. makes no mention of the additional tariffs in its post-meeting statement, which would suggest the administration will move forward with them ASAP.”

One thing is for sure: the US President doesn’t want a recession and stock market crash before next year’s November election. However, Donald could use any event, such as a recession, a market collapse and even a war with Iran to underline how others are trying to bring the USA down so he’s the guy who can make America great again!

Worrying first about something economically important and then opting to believe in the more likely optimistic outcome (when there’s a really good chance of it happening) actually helps me.