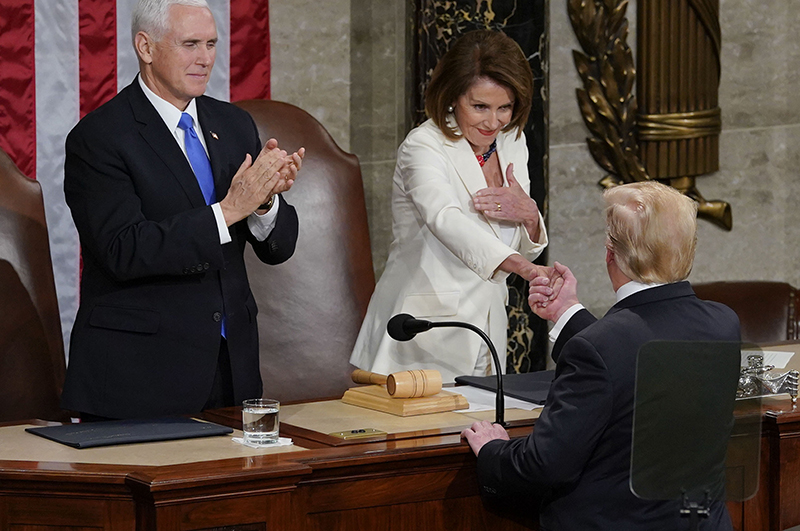 Donald and Nancy are doing it for the country! God bless America!

One of the biggest, positive election stories affecting us Aussies actually happened in Washington DC and we can thank good old Donald Trump for this one. And in what might surprise those who understand US politics, you can also thank Democrat Speaker of the House, Nancy Pelosi.

Now before you start thinking “I don’t give a toss about US politics” understand what these two historical enemies agreed to could not only make economic life good for Donald Trump (or whoever replaces him after next year’s election), it will be damn good for Scott or Bill after May 18.

You see, with our economy only chugging along at a 2.3% pace, which could go slower, the last thing we need is a US economy dropping into the slow growth lane.

Yesterday at our Switzer Investor Strategy Day in Sydney, which attracted around a 1000 people, I made the point that a plus for stocks and the economy over 2019 and 2020 would be the fact that Donald would be moving heaven and hell to make sure there’s no recession or a stock market crash before November 2020, when the Yanks go back to the polls.

This big-talking and business-savvy President, with so many controversial, un-presidential plays, can’t fail where he’s allegedly strong — keeping business and therefore the economy strong.

I was talking to a US private equity boss over the weekend, who’s a top-ranking Republican. He’s embarrassed at Donald’s antics but conceded if the economy runs well, the party faithful will look past some of this former casino-owners unusual tactics. Interestingly, he said if the Democrats come up with a very credible, very presidential candidate, many concerned Republicans could switch their vote to restore America’s standing in the international community!

That’s why Nancy Pelosi’s decision to support Trump on his $US2 trillion infrastructure deal says a lot about the Democrats and even Nancy Pelosi. Like the Labor Party here and the Greens, there are lefties within these parties who are going too far and too fast with their new age policy ideas and their goals would scare off potential Republican turncoats.

If Bill Shorten gets beaten, which I don’t expect, it will because of his policies, which seem over-influenced by extreme haters of anyone who looks like they’re income aspirational.

A case in point is retirees, who played by the super rules and who now are told that they’re not allowed to have the tax rebates that have been OK in the past. Imagine if you used your car for business and you were allowed a tax deduction but a left-leaning government decided only to allow deductions for four-cylinder or electric cars. Rule changes that rob you off expected tax refunds hurt big time, except if they don’t affect you!

This bi-partisan move by Pelosi helps the US economy as the Trump tax cuts become less helpful to US economic growth. This, in turn, will help company profits and the stock market, which will add to global demand, growth and stock prices worldwide and here.

Both Bill and Scott should be happy about this deal and you have to hope they work out how to fund it, which could be a sticking point with the US budget deficit blowing out under Donald.

For us, our economy and stock market need a strong US and world economy and the role America plays in all that is really important. Recently, I caught up with the new chairman of AMP, David Murray, who said some economists he watches think the chances of a US recession is 30% this year and 70% next year. I think that’s too soon. I reckon Donald, armed with a $US2 trillion infrastructure deal, would insulate the US in the election year of 2020. But I’d be more nervous about economic and market problems in 2021.

I’ve said before that Bill’s election promises could lead to a mini-boom between May 20 — the first trading day after the election — and January 1, when his capital gains tax discount drops from 50% to 25%. There could easily be a chase for capital gaining assets ahead of that policy change.

My worry is what happens after January 1? Property and stock prices could fall off a cliff, unless external pluses for stocks, say via big Wall Street stock prices advances, come to the rescue and offset the negativity created locally for stocks by Bill’s policies.

That’s why this Nancy-Donald deal, ahead of an expected Bill Shorten Government, couldn’t have come at a better time. Let’s hope the Washington-based political pair can consummate their new political marriage or else we could be screwed!