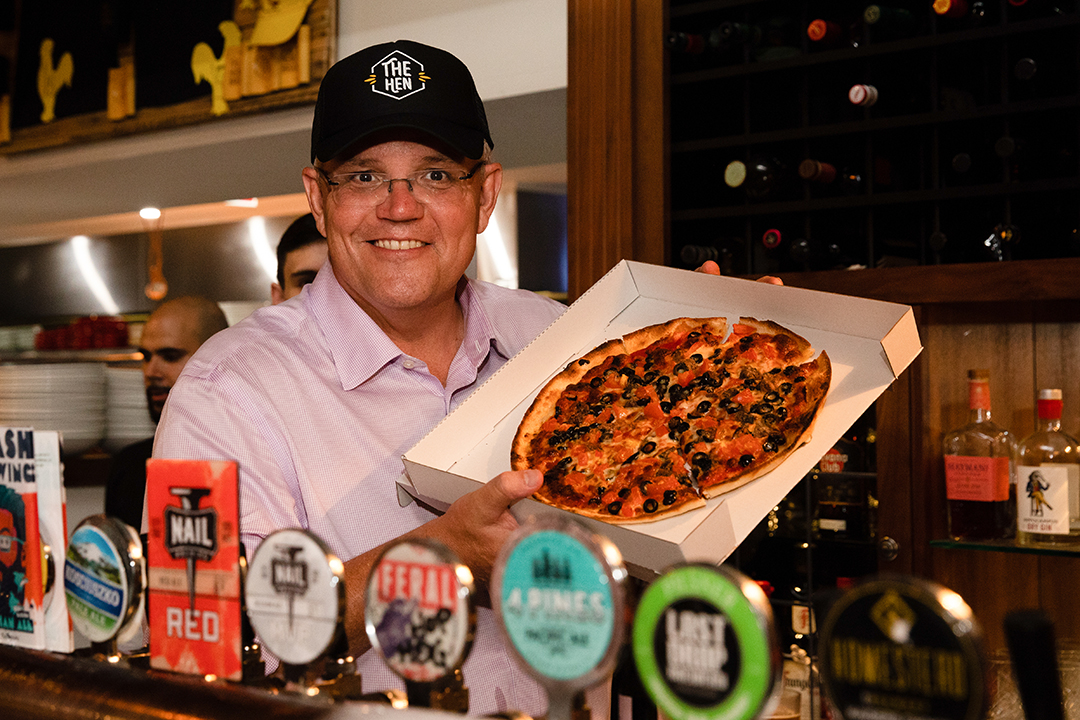 Does ScoMo have a Domino’s problem?

How does the Prime Minister’s mistake on how to get the economy going relate to the problems of Domino’s Pizza, which, according to one of my hotshot stock market experts, are now behind them? (Check this out on my latest Switzer TV Investing episode on YouTube).

There was a time when ScoMo and Domino’s couldn’t put a foot wrong. Scott Morrison made toughness with refugee ‘queue jumpers’ something sellable to the Australian electorate. He then migrated to the Treasurer’s gig. On my Sky Business TV show, I gave him a D for distinction for his first Budget.

At the time I interviewed him, he said “you never gave me a D when you taught me” at UNSW. I returned fire with “you weren’t as good then!”

He did well in this role, along with Malcolm Turnbull on a jobs and growth platform, which ultimately helped him secure a saloon passage into The Lodge, which was a prelude to winning over the Australian people on May 18.

This was capped off with a brilliant “thank you” speech on election night but it seems to have been downhill since then.

Alan Jones is ripping into him for not doing enough for the bush and the disastrous drought. He and Josh are refusing to budge on the Budget, with the likes of the Reserve Bank Governor, Dr Phil Lowe, virtually begging for fiscal support to stimulate the economy because he figures his interest rate policy is starting to fire blanks when it comes to getting the economy to go hard.

His new Treasury boss, Steven Kennedy, supports the PM’s stance, believing that short-term demand problems with an economy are best treated by monetary policy, while the fiscal fighting weapons, such as tax cuts and big spending measures, are used when it looks like a crisis that needs a big, quick fix.

For a few months now I’ve lost confidence in rate cuts and have said so here, calling on Josh Frydenberg to get going on a fiscal solution to our slow economy, where there is little inflation, small wage rises and unemployment isn’t falling as quickly as the government would like.

Yesterday, the SMH’s Ross Gittins summed it up that Mr Kennedy’s policy rules are old and out-of-date. So let me fill in a few reasons why I think Ross is on the money.

Economics relies on a lot of history and how changes in some variables, such as interest rates, will have impacts on demand, spending, house prices, job creation, the dollar, exports, imports and how fast we grow.

Until the 1970s, the history of economics said you don’t get high inflation and high unemployment at the same time. Then along came stagflation, caused by an oil price shock and the power of unions to create a wage-price spiral in a world where inflationary expectations were huge and out of control.

The world had changed. The structure of most economies was undergoing change and right now, economies worldwide are dealing with the implications of globalisation, freer trade, developing once underdeveloped economies, the Internet and all the digital disruption that has brought. Our economies are structurally changing and economics hasn’t caught up with this, which leaves politicians even further behind.

And this is where the ScoMo-Domino’s link comes in.

Until mid 2016, Domino’s was cooking up a storm. They had great leadership; they were cutting prices; they were using website promotions brilliantly; introducing apps and had pioneering delivery methods second to none. Then along came Uber Eats and Deliveroo. Once Domino’s was one of the few businesses in the world that delivered food. Now nearly all restaurants are doing that.

A virtual eating at home monopoly was lost so any other business hiccup was caned by the market as the share price went from $75 to $37. The pizza-maker was both a beneficiary and then a victim of a changing economy.

Delivered food has become huge and restaurants are suffering. Jobs in restaurants have to suffer, as more and more bikers with big cubes on their backs invade roads and footpaths around the country.

The changes are so profound that patrons at restaurants reckon their meals are coming later because there’s a cue of deliverers waiting to peddle or mo-ped to hungry customer waiting for the gate to clang or the doorbell to ring.

Clothing shops could be suffering because people are eating at home in tracky dacks during the week rather than dressing up and going out.

This is the real life snapshot of structural change and it shows up in queues outside of once unknown shops called Zara and H&M. And don’t forget, we Aussies once hated queueing up as much as being forced to eat tripe!

One of the great new-age changes is no one alive has seen interest rates so low and (at the same time) so ineffective. When I taught SoMo, I never mentioned negative interest rates because none of us ever conceived an economy would get so bad, unless it was a Great Depression. Even then they weren’t tried!

These are strange economic times. Domino’s boss Dom Meij has clearly worked out a way to re-invent his business. Now it’s up to Scott and Josh to do the same.

Though there is dispute whether he said this, I like the idea that Albert Einstein said: “Insanity: doing the same thing over and over again and expecting different results.”

Don Meij has opened more stores in existing sales areas to cut delivery times and labour costs and to get closer to pick-up customers to boost sales.

He calls it “fortressing our business in all markets.” There’s a lesson in this for ScoMo and his number one number cruncher.