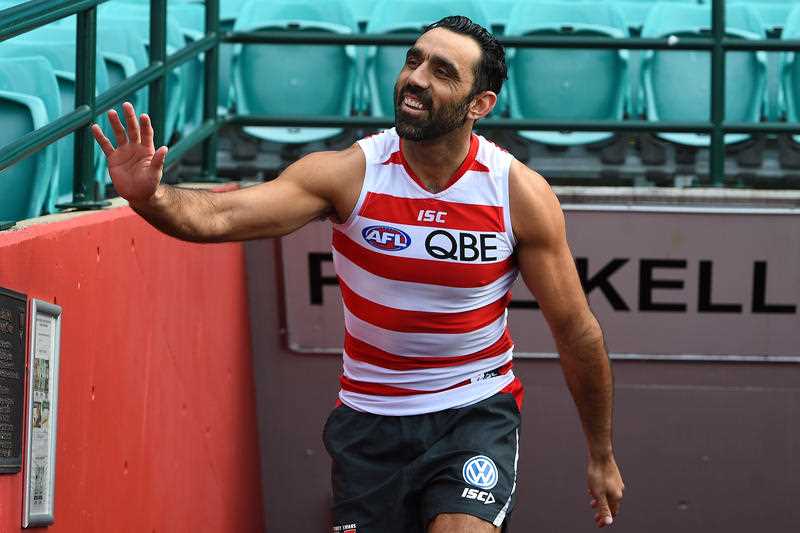 Do you have an opinion on Adam Goodes? Well read this

Stan Grant is one of this countries best journalists. I work with Stan on Sky News at 6:45 each night and he’s one of the most decent men I’ve ever met. What follows is a piece he wrote on Adam Goodes for The Guardian Australia website last week and it brought my wife to tears.

After reading it to her, I knew I had to share this with my loyal readers and when I asked Stan if I could republish it, he instantly said yes. I wasn’t surprised. He’s not only a great bloke but is also a superb writer and will teach you a lot about being Aboriginal in Australia.

I have wondered for days if I should say anything about Adam Goodes.

My inclination is to look for common ground, to be diplomatic. Some of the fault is with Adam. Maybe he’s been unnecessarily provocative. Racism? Perhaps. Perhaps the crowds just don’t like him.

Yes, I could make a case for all of that. But there are enough people making those arguments and all power to them.

It may not be what you want to hear. Australians are proud of their tolerance yet can be perplexed when challenged on race, their response often defensive.

I may be overly sensitive. I may see insult where none is intended. Maybe my position of relative success and privilege today should have healed deep scars of racism and the pain of growing up Indigenous in Australia. The same could be said of Adam. And perhaps that is right.

But this is how Australia makes us feel. Estranged in the land of our ancestors, marooned by the tides of history on the fringes of one of the richest and demonstrably most peaceful, secure and cohesive nations on earth.

The “wealth for toil” we praise in our anthem has remained out of our reach. Our position at the bottom of every socio-economic indicator tragically belies the Australian economic miracle.

“Australians all let us rejoice” can ring hollow to us. Ours is more troubled patriotism. Our allegiance to Australia, our pride in this country undercut by the dark realities of our existence.

Seeds of suspicion and mistrust are planted early in the Indigenous child. Stories of suffering, humiliation and racism told at the feet of our parents and grandparents feed an identity that struggles to reconcile a pride in heritage with the forlorn realities of a life of defeat.

From childhood I often cringed against my race. To be Aboriginal was to be ashamed. Ashamed of our poverty. Ashamed of the second-hand clothes with the giveaway smell of mothballs and another boy’s name on the shirt collar.

Ashamed of the way my mother and grandmother had to go to the Smith Family or Salvation Army for food vouchers. Ashamed of the onions and mince that made up too many meals.

We were ashamed of the bastardised wreckage of a culture that we clung to. This wasn’t the Dreamtime. This was mangy dogs and broken glass.

Like the Goodes family, we moved constantly as my father chased work. But wherever we went we found our place always on the fringes. What semblance of pride we carried too easily laid low by a mocking glance or a schoolyard joke.

We were the blacks. So easily recognised not just by the colour of our skin but by the whiff of desperation and danger we cloaked ourselves in. What resentment we harboured, we too often turned on ourselves, played out in wild scrambling brawls from the playground to the showgrounds that sent the same message: stay away from the blacks.

There was humour and there was love and there was survival. And as I grew older I pieced together the truth that we didn’t choose this. We are the detritus of the brutality of the Australian frontier.

As Australia welcomed waves of migrants and built a rich, diverse, tolerant society, we remained a reminder of what was lost, what was taken, what was destroyed to scaffold the building of this nation’s prosperity.

We survived the “the smoothing of the dying pillow” of extermination to end up on the bottom rung of the ladder of assimilation. Too many of us remain there still. Look to the statistics: the worst health, housing, education, the lowest life expectancy, highest infant mortality. An Indigenous youth has more chance of being locked up than educated.

If good fortune or good genes means you are among the lucky few to find an escape route then you face a choice: to “go along to get along”, mind your manners, count your blessings and hide in the comfort of the Australian dream; or to infuse your success with an indignation and a righteousness that will demand this country does not look away from its responsibilities and its history.

I found a path through education that led to journalism. A love of knowledge and an inquisitiveness that has shot me through with anger. A deeper understanding of history, of politics, of economics, leaving me resentful of our suffering.

I wrestle with that anger as the boy I was wrestled with his shame. I want to see the good in a society that defies the history of its treatment of my people.

It is the legacy of my grandfather who signed up to fight a war for a country that didn’t recognise his humanity, let alone his citizenship. It is the lesson of the example of the lives of my mother and father, my uncles and aunties. Lives of decency and hard work and responsibility and rooted in our identity as Indigenous Australians.

When I was 16, I summoned the courage to speak to my class. As the only Indigenous kid, the only Aboriginal person my schoolmates had met, I wanted to tell my family’s story. My teacher was proud and encouraging. When class returned after lunch the words “be kind to abos” were scrawled across the blackboard.
The rejection, the humiliation, cut me to the core.

This is the journey too of Adam Goodes. A man whose physical gifts have set him above and given him a platform available to so few and whose courage demands that he use it to speak to us all.

Events in recent years have sent Adam on a quest to understand the history of his people, to challenge stereotypes and perceptions. I have spoken to him about this. I recognise in him the same quest I see in myself. It is a conversation I have had with so many of my Indigenous brothers and sisters.

This is rare air for anyone, let alone a footballer. He has faltered at times and the expression of his anger at our history and his pride in his identity has been challenging, if not divisive.

The events of 2013 when he called out a 13-year-old girl for a racial taunt opened a wound that has only deepened. To some the girl was unfairly vilified. Adam’s war dance of this year challenged and scared some people. His talent, the way he plays the game, alienates others.
And now we have this, a crescendo of boos. The racial motivation of some giving succour to the variously defined hatred of others.

To Adam’s ears, the ears of so many Indigenous people, these boos are a howl of humiliation. A howl that echoes across two centuries of invasion, dispossession and suffering. Others can parse their words and look for other explanations, but we see race and only race. How can we see anything else when race is what we have clung to even as it has been used as a reason to reject us.

I found refuge outside Australia. My many years working in Asia, the Middle East, Europe and Africa liberated me. Here were the problems of other peoples and other lands. Here I was an observer freed from the shackles of my own country’s history.
I still wonder if it would be easier to leave again.

But people – like Adam Goodes, other Indigenous sportsmen and women who are standing with him, his non-Indigenous teammates and rivals who support him, and my non-Indigenous wife, my children and their friends of all colours and the people of goodwill who don’t have the answers but want to keep asking questions of how we can all be better – maybe they all make it worth staying.