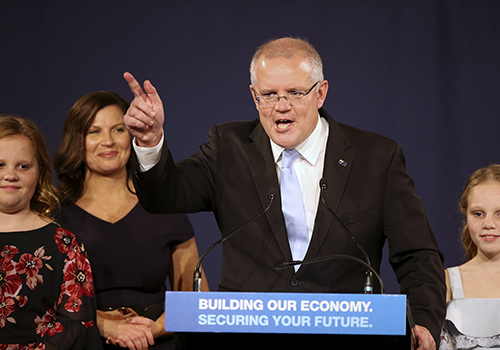 Did ScoMo wilfully exaggerate how good our economy was going?

If there’s one thing I hate in this eco-political commentary game it’s ‘crap’ masquerading as objective observations. Anyone who knows how tricky it is to guess the course of an economy would never have tried to imply that Scott Morrison and the Coalition tried to lead the Aussie voter astray, by saying that the Oz economy was strong before the poll.

I have to admit that I didn’t pour over every public statement ScoMo made on the hustings but I wouldn’t be surprised if he said he was confident the economy was going well because that’s exactly what the Reserve Bank was saying before the May 18 poll.

It was obvious that our economy was slowing down as the September economic growth number was 0.3% and the December one was 0.2%. But this is what we were told by the most august and least-influenced by Government body in the policy-making arena — the RBA.

One week out from the election on Friday 10 May, this was CommSec’s headline, after reading the RBA’s Statement on Monetary Policy minutes: “Reserve Bank remains confident on outlook”.

This is what they showed us about our economic outlook:

The above table tells us that the RBA’s Dr Phil Lowe and his team thought growth would drop from an expected 3.25% in June down to a 1.75% growth rate for this quarter but it would rebound to 2.75% for the rest of the year.

If that’s true (and I’d say it won’t be), that would be a good rate of growth. And given the June quarter captured the May election, all you can accuse ScoMo of is having faith in Dr Phil and the RBA. That’s not a huge political crime!

I must admit I was on board with the RBA’s hopes and dreams for growth, until I interviewed the CEO of Mortgage Choice, Susan Mitchell, a couple of weeks before the election. She revealed about 20% of people who used to get loans (before APRA and the Royal Commission made banks play hardball with lending), were copping either a “No” or a vastly reduced loan size when they got a “Yes”.

One in five borrowers being taken out of the economy shocked me and it made think that this “let’s make banks better” goal of the Royal Commission and the community was going to have a real economic cost!

If I was to advise Treasurer Josh Frydenberg, I’d be saying this has to be an issue he should be monitoring very closely. There’s no point cutting interest rates if banks are stopping good borrowers getting access to cash.

There are those who think that this could restart a price take-off but that ignores the history of house prices after a boom and slump. In Sydney, there was a 10-year period between 2003 and 2013 where house prices went sideways and that’s because a price nosedive takes away the irrational exuberance and the FOMO — fear of missing out — factor. This chart shows I’m right. 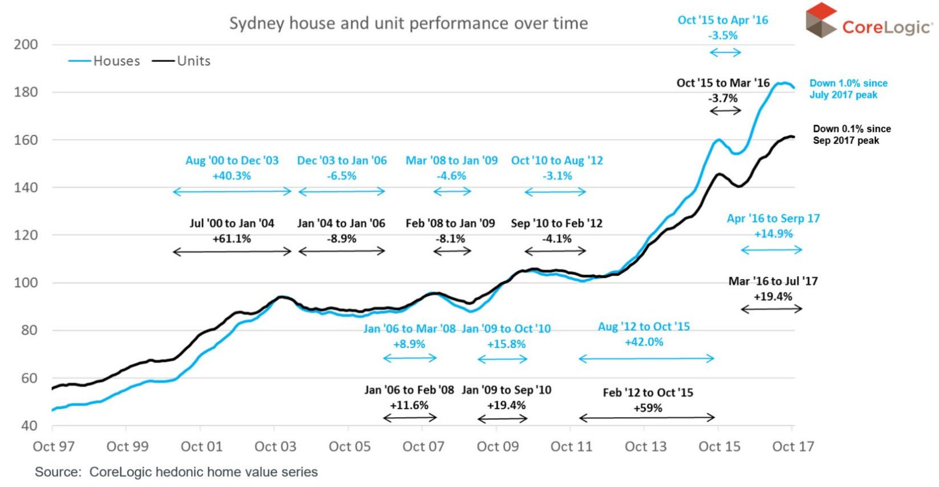 This negative force working against growth came with the usual inhibiting, economic effects of an election, made worse by the confidence impact of the ongoing trade war talk coming from the tweets of President Donald Trump.

Over the weekend we saw that China’s economic data is being badly affected by the tariff battle. As an  example, we’ve seen very poor new vehicle sales in May, down 16.4% on a year ago after a 14.6% annual decline in April. To see the knock on effects to us, you only have to look at our tourism numbers. Tourist arrivals fell by 0.2% in April, with departures down 1.1%. But when it comes to China, which is our largest source of tourists to Australia, over the past year 1,438,500 tourists came here. That was up by 1.3% on the year but that’s the weakest annual growth rate in nine years!

Recently, Westpac’s chief economist Bill Evans, the economist who first called the slowdown and need for interest rate cuts, predicted two more cuts, which would take the cash rate to 0.75%. But some number crunchers like RBC’s Su-Lin Ong and Macquarie’s Justin Fabo are calling a 0.5% cash rate!

That would only happen if Donald goes loco with his trade war, so let’s hope sanity makes a comeback in the Oval Office.

Over the weekend, NAB reportedly thinks we’ll see two more cuts this year, with the final one for 2019 on Cup Day. However, there are conflicting signals out there that give optimists hope that my economic buddies are getting too negative.

The Weekend Australian reported a CBA survey of accounting firms, which concluded that a net 51% of accountants think that business conditions for their clients are positive to very positive. Added to this is the spike in NAB’s business confidence reading from 0 to 7 in May. And recently we saw business investment plans were the strongest in seven years, which comes on top of company profits rising for the seventh straight quarter, up by 1.7% in the March quarter. This means profits were up 7.8% on the year. And I have reason to believe the second half of 2019 looks a lot better than the last 12 months.

If banks start lending and Donald stops have a lend of his Chinese ‘friend’ Xi Jinping, then the RBA’s table above might end up being more accurate than it currently looks!