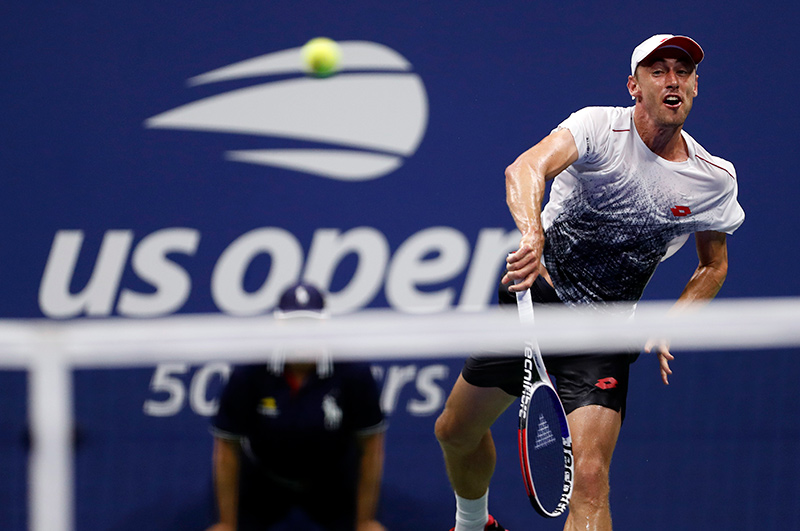 Devour these lessons from the gutsy Millman win over Federer

I should be talking about the new PM’s plan for business tax cuts for small and medium-size businesses involving bigger depreciation claims. And then there’s Bill Shorten wanting to extend the Royal Commission, which would be bad for bank share prices but great for Bill’s political stocks. But the incredible win of John Millman is too important to anyone wanting success — be it business-building or career — to ignore today.

If you don’t want success for you or the people you love or lead, then stop reading now.

In case you missed it (you wouldn’t be a sports nut), Aussie Millman beat the legend of tennis Roger Federer in the fourth round of the US Open at Flushing Meadow. And Roger has been in good form in New York, where only a couple of days ago he gave Nick Kyrgios, our great tennis hope, a complete towelling and tennis lesson, making the naturally talented Aussie look like a star struck child happy to be beaten by his idol.

The SMH’s Phil Lutton summed up the Nick versus John point of difference very succinctly: “Never blessed with the kind of natural talent that Nick Kyrgios finds to be such a burden at times, Millman did every single thing the hard way. When his ranking was down as low as 1193 in 2014, he played low-level tournaments anywhere that had a tennis court, grinding away until his next physical setback.” Unlike Nick and Roger, Millman has done plenty of 9 to 5 jobs as he awaited his body’s repair. But when he got back to tennis he was always competitive.

People will compare him to Stephen Bradbury, who looked like he got lucky winning gold at the Winter Olympics speed skating final in Salt Lake City in 2002. And maybe that’s fair but both sportsmen were world class, which always annoys me as some people think these stories of ‘lucky success’ are nice but undeserving.

Already I’ve read that Roger was struggling in the heat, which even says more about Millman that he was able to stand terrible heat to prevail. What riles me is that uninformed spectators ignore that John was in the fourth round of a grand slam tournament! And Bradbury was in the final, so he must have been a damn good skater and in the top five skaters in the world that day. Sure, he got lucky, so have some of the best players and teams in the world with referee decisions, angles of the wind and all the odd things that can determine success or failure in sport.

The Millman lesson is about self-belief, having the guts to really try and to strive to be the best you can be. I want my children and their children to know the Millman story. And I want my employees — for their sake and my sake — to think about what Millman has taught us in beating arguably the best tennis player of all time. I liked Lutton’s take on the Millman story: “If there has been one thing that has defined Millman's long, ragged journey to respectability, it's been an unbreakable belief that he was better than everyone thought.”

This astute assessment made me think about arguably the USA’s greatest president: Theodore Roosevelt.

This is how the US leadership expert explained why Teddy Roosevelt's story of success was, like Millman’s, unexpected.

He was born in Manhattan into a wealthy family but he ended up being a cowboy, a military leader, the ‘builder’ of the Panama Canal, a national parks creator and probably the most well-read US leader of all time.

His road to success was slow but everything that he did, he did with great focus and with the desire to be the best he could be. He even took on his own party when he busted up the monopoly operation of Standard Oil, which was choking and hurting other US businesses.

This giant of political achievement, who contrasts with so many leaders we have today, actually started out as someone who you’d never have expected to be so accomplished.

“As a child, he was puny and very sickly,” John Maxwell wrote in his 21 Irrefutable Laws of Leadership. “He had debilitating asthma, possessed poor eyesight, and was painfully thin. His parents weren’t sure he would survive.”

However, his father was a interventionist/realist and this is what he told Teddy when he was 12 years of age: “You have the mind, but you don’t have the body, and without the help of the body, the mind can’t go as far as it should. You must make the body.”

After that, he engaged in body building, boxing, hiking, ice-skating, rowing, horse riding and anything that would change a negative into a positive.

Maxwell concludes his chapter called The Law of Process with this great lesson: “Leadership doesn’t develop in a day. It takes a lifetime.”

John Millman has committed himself to a process that he wanted to achieve at the highest level. And he won the match that will define his lifetime in tennis.

Another great of tennis, Chrissie Evert, has always inspired me with a wonderful quote, which should be trotted out here today. In describing her success, Evert explained how important desire was: “There were times when deep down I wanted to win so badly I could actually will it to happen. I think most of my career was based on desire.”

These are the two take away lessons from the Millman win over Federer: you have to want success and you have to commit to a process that other winners have shown us really works. May the force be with you!

And speaking of winning, you can improve your knowledge about money by attending our Listed Investment Conference next week in Brisbane, Melbourne or Sydney. We've brought together a collection of Australia’s best money managers to find out how they’re investing and where they see value in the current global environment. You can access a complimentary ticket (or two!) to come join us. There’s only one week remaining – so make sure you don’t miss out! To access your free ticket/s, click here, choose the event you’d like to attend in your State and enter the promotional code ‘SD’ on checkout. I hope to meet you there so come up and say “hello”.