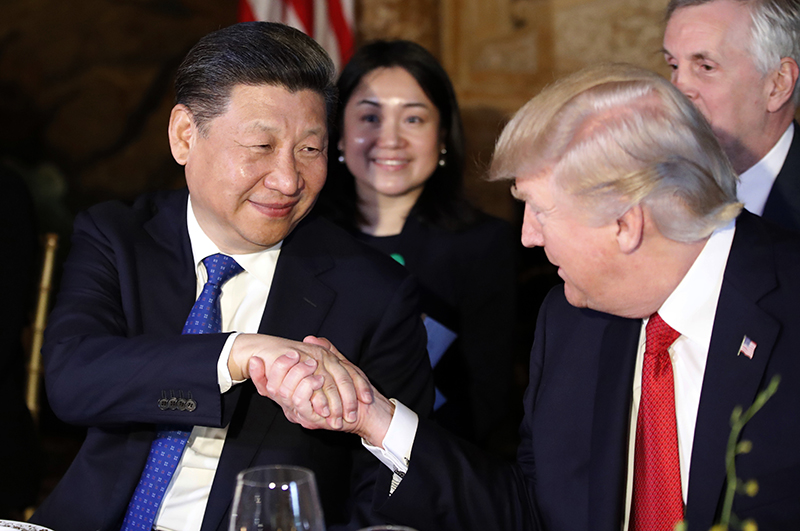 Deal or no deal? I'm watching Donald's hand this weekend

The scene is set for the stock market to beat the October blues that pushed the US and the Aussie markets into correction territory. Today most of the bad stuff that has been spooking stocks externally is turning positive but a weekend escape by the leaders of the G20 to Buenos Aries, the Argentinian capital, will send shares higher or substantially lower on Monday.

In contrast to what I wrote yesterday, on reflection I hope I DO have to use the headline: “Don’t cry for me, Argentina.”

Yesterday I thought it was a cute line to describe what a negative outcome from the Presidential pow-wow between Donald Trump and Xi Jinping might mean for stock markets, and my hopes that all the bad stuff hurting share prices would turn into good stuff.

However, if Donald and Xi can crack a deal of some kind and talk about progress on the US securing some China concessions, then I should use the line “Don’t cry for me, Argentina” because there is nothing to cry about!

That is, in a perfect world, Donald shows he understands how his policies are destabilising financial markets and that if he can maturely convinces Xi’s China to play fair on stealing intellectual property and being more like a developed economy rather than a developing one, where high levels of protection are tolerated by first world countries, then this would excite markets.

It would set the scene for a good 2019 for stocks, with Jerome Powell, the Fed boss, telling the investing world yesterday that his central bank won’t be raising rates like you’d expect from a robot or an artificial intelligence software program.

He has inferred that he will play the economy he sees before him, actually arguing that the Fed can’t ignore the stock market, which he also implied, on his reckoning, was not expensive!

It was unusual for a Fed boss to acknowledge that he takes into account what the stock market is saying. I think it’s smart, overdue and shows that some central bankers have learnt something from the GFC.

Speaking at a gathering of the Economic Club of New York, Powell said the second time a Fed official talked about financial stability at the venue brought criticism from Wall Street and industry experts.

The speaker was concerned about what the Fed was seeing and the date was 18 March 1929! Weeks before the Fed had made a public statement condemning banks for fuelling excessive stocks speculation.

Powell said inflation and jobs are the meat and potatoes of the Fed but since the GFC, financial stability has become increasingly important on the menu.

I think the US central bank is worried about the country’s President and how his trade war is affecting business, world trade and global economic growth, as well as US growth.

Last week, Goldman Sachs downgraded its economic forecast for the US into the low 2% region. This week we learnt that the latest read on US growth was 3.5% so if the forecast is right, then Powell saying he’s not wedded to as many interest rate rises as was expected when growth forecasts were higher makes him look rational.

And that’s a condition I’d wish upon Donald over the weekend in Argentina. But that might be a big call because you can’t bet on the US President to be predictable. Want proof? Well, look at the overnight report on his latest remarks, ahead of heading south to Buenos Aries. CNBC revealed that  “Trump says he’s close to China trade deal but ‘I don’t know that I want to do it.”

And the stock market went negative when it was revealed that White House trade adviser, Peter Navarro, was going to the dinner. This guy has form. Here’s CNBC again on problematic Pete: “News of his attendance dampened hopes that a trade deal could be hatched at the dinner given his longstanding hawkish tone on U.S.-China trade. Earlier this month, Navarro said any deal between the U.S. and China would be on Trump's terms, not Wall Street's.”

Well, guess what, Wall Street sold off on that tirade but then the White House economic adviser, Larry Kudlow, stepped in and hosed down those heated comments from Navarro, and Wall Street went up.

Anyone who doesn’t think this trade war and this meeting in Argentina isn’t important hasn’t been watching the stock market.

Stocks have been down because of interest rate fears, which Powell offset yesterday. Oil price falls also hurt stocks but they’re now on the rise. Brexit too has been a negative and it remains a worry, as does Italy and its Budget bad behaviour.

However, the trade war between the world’s two biggest economies is the main game. Chinese economic growth and its stock market is suffering. And it’s not all good news for US companies either.

A leading fund manager that plays global stocks told me that a company like Whirlpool was advantaged because of Trump’s tariffs and duly put up prices by 20%! However, steel and other costs also spiked and overseas business dropped significantly and their latest profit reports have been disappointing.

I sincerely hope that on Monday I don’t have to use the headline: “Cry for me Argentina” but with Donald, you never can tell. And I suspect Xi isn’t an open book customer either.

And this from Donald on why he’s not sure he wants a new trade deal also worries me: “Because what we have right now is billions and billions of dollars coming into the United States in the form of tariffs or taxes, so I really don't know.”

But wait there’s more: “"I will tell you that I think China wants to make a deal, I'm hoping to make a deal but, frankly, I like the deal we have right now."

This guy is one in a trillion.