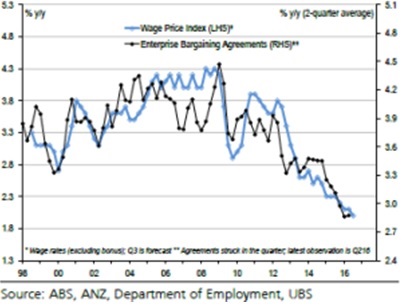 Could small businesses be to blame for slow wage rises?

One problem that gets regular attention is the poor state of wage rises since the GFC and the latest National Accounts figures actually shows the share of income going to wage-earners is significantly low.

Jessica Irvine writing in the Fairfax press explained the situation this way: “The share of 'total factor income' going to workers as wages, fell to 51.5 per cent in the March quarter – a sharp 3 percentage point fall over the year. Meanwhile, the profit share – or the percent going to capital – rose by a similar amount.”

To be provocative, Jessica asked: “So, are bosses just getting better at screwing over the workers?”

But could there be other reasons? Let’s look at the usual suspects to see who’s to blame. Try these:

I think all these factors partly explain why wages growth is slower than it has been and the GFC effect cannot be left out of the story. The chart below is instructive as it shows the high wage rise before 2008 and the GFC, which was followed by a rebound during the mining boom but, since then, the economy has been subdued and so have wage rises.

But there's one other trend that might explain why less workers gets less wage rises and national income and that could be the spectacular rise in self-employed entrepreneurs, contractors and people such as mums at home, who create a part-time business, as well as those young people who aspire to be Mark Zuckerberg!

What I’m arguing is that people who once were paid wages might now be taking profit as business owners. They might be paying themselves lower wages to create profits to justify getting loans to expand their business, employ others, and so on.

Sure, I get it that wages are rising more slowly but the economy is not doing so well and it seems the whingeing class doesn’t want to recognise that we didn’t go into recession, our unemployment rate didn’t breach 6% and if the price we have to pay is slower pay rises, a surge of jobs, more self-employed entrepreneurs and historically-low interest rates, so be it. 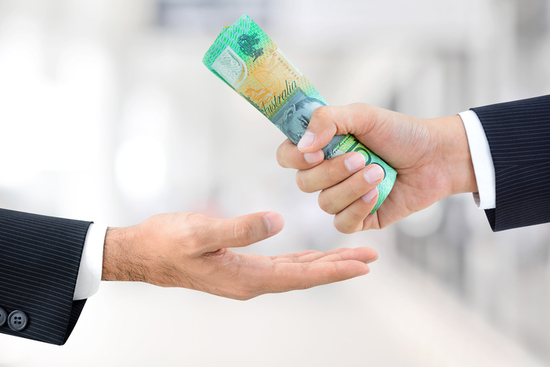 The irony is that this trend of a lot more Aussies giving up being an employee to become an entrepreneur/employer means that these are the people who’ll help create the economic growth in the future, which will underpin the overdue spike in pay-rises.

That chart above shows how significant the pay rise drop has been but anyone who is surprised didn’t really understand how lucky we were to avoid the GFC recession and have never employed anyone using their own money!

And finally, let me assure you, when you have good people working for you and you know how hard/costly it is to find these human assets, you give them pay rises when your business can afford it.