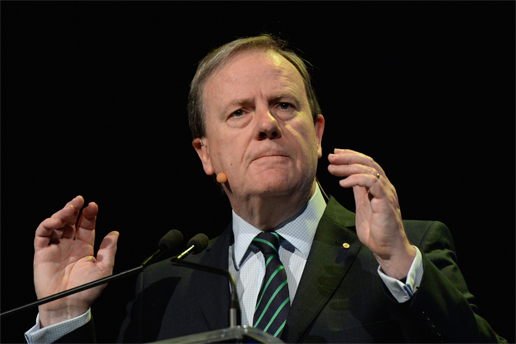 Could Peter Costello be the Ray Donovan of Aussie politics - a fixer?

If Grace Collier writing in The Australian is right, that Peter Costello is the answer, then what’s the question? Is it who could beat Bill Shorten at the next election? Is it who should replace Kelly O’Dwyer in the seat of Higgins, if her Liberal Party members there decide to ditch her? Or is it who has the right credentials, not only to be PM but be the PM we have to have to sort out the political mess that has become the Senate.

I think it’s all the above but I think Peter is the best hope to settle down the natives at the next election. So let’s hope there are smart Liberals out there doing the best of backroom deals to wrestle the much respected ex-Treasurer back to Canberra.

The Senate is what we voted for, which contains the once thought impossible and unlikely team of Derryn Hinch, Pauline Hanson, Nick Xenophon, Cory Bernardi and don’t forget the very unique Jacqui Lambi. (I have to confess I was critical of Jacqui until I recently met her — she might not see politics as I do and she might be a little too fast to shoot from her hip. However, she sees the political and real world as many Aussies do, so she’s a fair enough rep for Canberra. And she was voted in again minus the deadweight of big Clive Palmer. Jacqui did tell me that politics was easier without Clive and his PUP — Palmer United Party — breathing down her neck!)

When you throw in the Greens and Labor, our Senate has virtually become one great big “computer says No!” It has rendered effective government policy hopeless and that’s what the voters thought about the major parties at the last election. And things haven’t got any better.

Matters were made worse when Malcolm Turnbull called for an election last year and then went on to win by a measly one seat, basically turning him into a lame duck Prime Minister, with a pack of Liberal Party wolves in his own Government, who’d love to devour him and everything he stands for.

Malcolm is a bright lad but politics is for the rat cunning and the Machiavellian manipulator. After two years in the top job, he’s not cutting it.

Newspoll shows he can beat Bill Shorten in a PM popularity contest 46% to 31% but his party is being clobbered 47% to 53% in two-party terms. The Government has lost 12 polls in a row to Shorten’s Labor, as Bill pumps out policies that led Mathias Cormann to compare it to what the USSR would’ve dreamt up.

Senator Cormann accused Bill of making a "deliberate and cynical political judgment that enough Australians have forgotten the historical failure of socialism". He argues Bill is exploiting the politics of envy.

Gamblers might punt that Malcolm’s lead over Bill should mean that the former should hang on to the top job, but those who believe 12 weeks of Labor easily beating the Government in Newspoll say the next election might be one test Malcolm might not pass. His academic, legal and investment banking history shows that Mr T has had few failures but he’s finding Canberra, and all that goes with it —  from same sex marriage lobbyists to power price protestors to in-house Tony Abbott lovers to even Donald Trump — are all a bit much.

Why would Costello get the Government and the country out of its current pickle?

Yep, he comes with an impeccable CV from his time as our longest-serving Treasurer, which saw a string of budget surpluses and the KO’ing of Federal Government debt. It set the scene for a very healthy national balance sheet when the GFC hit, which permitted Labor to spend big in defiance of the threat of a potential recession that just about every country in the Western world endured, but not us!

But even more importantly, Costello might be able to pull a lot of disgruntled Australian voters together, such that they might reject minority parties and ‘out there’ Senators, and just might lead a government that can get legislation passed.

We need a more workable Parliament, where we get more “ayes” than “nays”. And we need Canberra to start generating consumer confidence, which at the moment is locked in pessimism mode.

Now Peter Costello might not be behind some of the media calls for his return, and if his time away from the fish bowl, that is the nation’s capital, has made him see his life as the chairman of Nine Entertainment and the Future Fund as a better one than being PM, then we need someone like him to emerge.

The divisive nature of Aussie politics and the lack of leadership that fuels this national, dysfunctional outcome that creates unworkable, crazy Senates, has to go for the sake of the jobs and the better lives that a healthier, more positive economy can create.

In his great book, 21 Irrefutable Laws of Leadership, John Maxwell pointed out that “Leadership is the limiting factor for you and your business” and equally it can make or break a country. Right now, there are many expert analysts pondering what the Trump experiment will do for the US economy. At the moment, Wall Street is giving the President the benefit of the doubt but the doubt factor is a lot higher than November last year, when he won the election and made his first speech as the new leader of the USA.

If Peter Costello won’t step up, then Malcolm has to substantially lift his game, or someone else with more credibility as a “bring us all together” leader, of Bob Hawke’s or John Howard’s ilk, will have to emerge from somewhere, and fast.

Recently I’ve been watching the great US television drama, Ray Donovan. Ray is a fixer in Hollywood, who cleans up the mess made by celebrities and others. Will Peter Costello be our Ray Donovan because there sure is a lot of mess in Canberra to clean up?