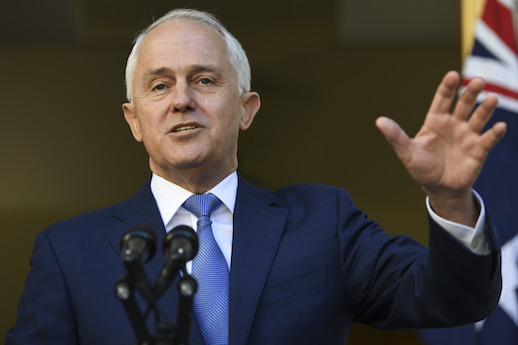 Could a boom and budget surplus save Malcolm Turnbull as PM?

Hold the press! Positive headline alert coming from major newspapers with Treasurer’s budget showing our debt is $11.9 billion lower than what was forecast!

But wait, there’s more — it’s now conceivable that we could be back into a budget surplus by 2020, which would be great timing, as that’s when I’m going to be more cautious about a US recession and Wall Street crash!

And the timing could not be better for a PM, whose Government has been clobbered for the 25th time in a row by Labor in the popularity survey called Newspoll!

The current score is Labor 53% on a two-party preferred basis to the Coalition on 47 but it was 54-46 on the previous poll, so there’s some improvement. And a booming economy in 2018 with the budget deficit shrinking and debt evaporating might be the news that could turn around Malcolm Turnbull’s Government stocks.

One of the great reasons Australia weathered the GFC storm without a recession was because the Rudd Labor Government inherited a big budget surplus and virtually no debt thanks to the Howard Coalition Government.

For Treasurer Scott Morrison the economy is turning and will help his reputation as the nation’s top bean-counter if he can set Australia up for a budget surplus in three years time.

Today we will hear that the MYEFO — Mid-Year Economic and Fiscal Outlook — will show the budget for this financial year is expected to wind up $11.9 billion better than was guessed at May when the Budget was handed down.

A Fairfax report makes a worthwhile point: “Crucially, from this current financial year, the government will no longer have to borrow money to pay for everyday expenditure on pensions, health and education - a year ahead of schedule.”

So how has this improvement happened, given that Labor, the Greens and the rag tag mob of Independents in the Senate have been saying “computer says no” to nearly every money-saving idea put forward since Joe Hockey’s first Budget when the PM was Tony Abbott?

Well, my ex-student Scott Morrison has got a few hardnosed policies across the line to cut spending but it’s mainly economic growth picking up.

Growth leads to higher company profits, great jobs growth this year and slightly higher wages. These development helps the tax take for Canberra and more people with jobs cuts the social welfare spending and every new employee ultimately pays tax rather than receiving the dole.

It all goes to the budget bottom line and if the Oz economy keeps growing in 2018 and 2019, as I’ve tipped for over a year in this column, then the improvement in our finances might not only be better than expected, but it could actually make more Australian voters give Malcolm’s Government another chance in the 2019 poll.