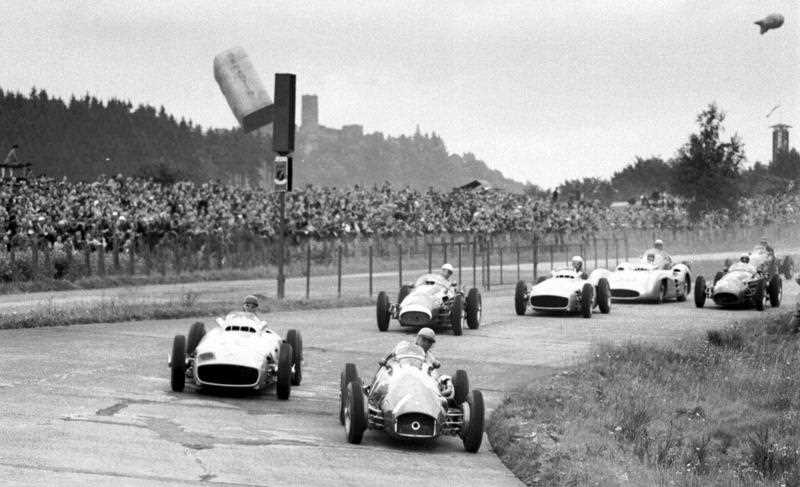 It’s been another ordinary day for stocks overseas and it won’t help our market. This time it’s mainly about the price of oil, as the Saudis and their OPEC buddies try to KO their US shale oil rivals by making it unprofitable for them to survive. This is rattling oil and gas companies share prices and China’s latest trade figures did not help iron ore prices, so BHP and Rio are bound to be under pressure.

Now I know many of my readers will be feeling the pressure of all this but I say don’t get too stressed and think about Fangio!

I’m sorry but I can’t join the pity party around sliding stock prices now because I know this is only temporary. It’s annoying but, some time ahead, things will change. As I said above, I recommend you think of Fangio.

The story of the great Grand Prix driver of the 1950s, Juan Manuel Fangio, was passed on to me by Verne Harnish, the US small business expert, who wrote that great book The Rockefeller Habits. He got this great, inspirational story from the Harvard Business Review, which explained the lesson from the miraculous Fangio tale.

Verne said the winners in a changing world are those who can look at potentially confusing data from many areas and be able to join the dots. I reckon Bill Gates did it with Microsoft and later Steve Jobs did it with Apple. In the investment area, Nouriel Roubini and even our own Steve Keen saw the debt problems that ended up delivering the GFC and the stock market crash.

Sure, Steve got his real estate slump story wrong after the GFC but dot-joining is not an easy task! By the way, Nouriel has kept on the doomsday predictions since 2008, though he does change sometimes but he largely has been way off the mark compared to his pre-GFC calls.

Back to Fangio and in the 1950 Grand Prix at Monaco, he slammed on the brakes ahead of the famous Tabac corner to avoid being a possibly life-threatening massive pile up.

His sixth sense slowing down has been revered as a miracle by racing experts but the HBR argues it was a join-the-dots moment that saved Fangio’s life!

The day before the race, he saw a photo of a 1936 car race accident on the Tabac corner and it was this research, in concert with something weird that he saw that day in the race, that helped him join the dots. As the story goes, he says he noticed a different colour in the faces of the crowd, which was dark rather than the usual colour that faces create. Why? The reason was that their heads were turned all looking at the pile-up crash on the other side of the corner!

Fangio processed the photo, the lesson, the change of colour and why the colour had changed and came up with a pile up crash ahead so he hit the brakes!

The lessons for leaders, the HBR says, is that they must be always in the game to learn, to be on the lookout for changing signals and then to respond quickly. Howard Gardner, a psychologist, says nowadays we need “searchlight intelligence” that is all about scanning all the stuff/data/info out there. Then it’s about joining the dots, which leads to smart actions.

So what’s the relevance to these crappy oil, commodity and share prices? Well, smarties think two of the causes of lower oil prices — OPEC’s oversupply and the rising US dollar — will change next year and, when it does, the bad news of today will be replaced by good news tomorrow.

I don’t know how long it will take but I’m betting that central banks will create the growth that will eventually lift commodity and share prices. I also believe that low oil prices have to help a pile of businesses that have oil/energy as key costs and there has to be a huge army of consumers, who will benefit from lower gasoline/petrol prices, which has to help demand, growth, jobs, profits and then share prices.

One final Fangio point needs to be made. I know there are a lot of challenges out there right now for economies and stocks. However, I’ve seen a lot of ‘photos’ of Tabac-like, scary economic corners in my time, and what I’m seeing now and the dot-joining I’m doing, isn’t making me slam on the brakes on my positivity for stocks.