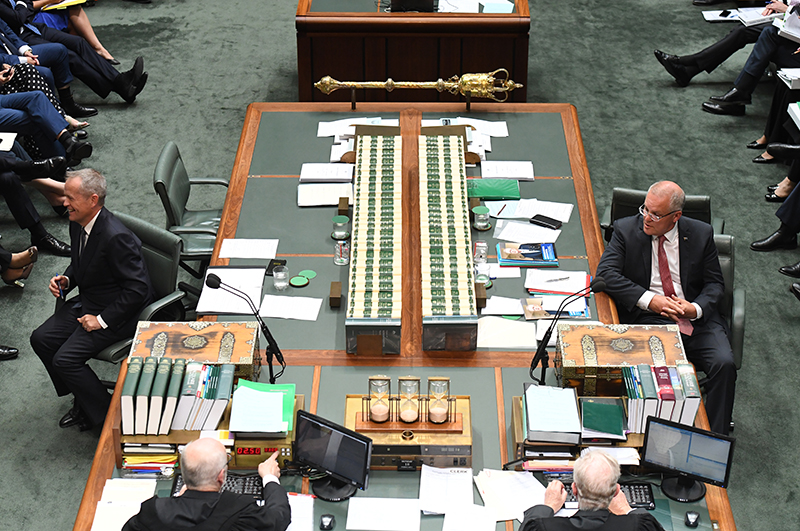 The Royal Commission has flushed out what Labor wants to do with mortgage brokers and Bill has dropped the idea of consumers paying the broker for the loan, which would have forced most rational borrowers back to the banks. And he’ll raise the maximum compensation for individuals and small businesses to $2 million, if a financial business does the wrong thing.

The body that will dole out the financial penalties is the little known body called AFCA, the Australian Financial Complaints Authority. It came into existence in November last year and is a good idea of the Morrison Government but it does underline a big problem with the Coalition leadership team.

I was interviewed on the Your Money channel on Monday night just before my Money Talks show. I made the point that I might have taught Scott Morrison economics when he was a young man but I will not take responsibility for his marketing skills.

Mind you, I think he’s doing a good job getting out there, doing stuff and being visible but he and his team aren’t landing enough punches.

Hawke, Keating, Costello and Howard could get opponents into a corner and really pummel them. So far, the Libs have been hitting Bill Shorten and Chris Bowen with hot lettuce leaves.

Josh Frydenberg seems to be raising the heat on Labor over mortgage brokers after Labor has agreed to make banks pay brokers 1.1% upfront for loans, ending trail commissions. But brokers won’t be able to add more on to the loan for extras such as a car, which adds to the size of the loan and the ultimate commission.

With an election on May 18, the Government has to start telling us what they will do and what we should be afraid of about Labor. The calibre of the Libs’ marketing was shown in my seat of Wentworth where my Dr Kerryn Phelps clobbered the Government’s offering of Dave Sharma.

This is a seat with a hell of a lot of property and stock market investors and aspirational white collar workers and we heard nothing in the campaigning about Bill and Chris’ plan for negative gearing and the capital gains tax discount halving, which will affect all investors.

We heard nothing about Labor’s franking credits policy, which will deny non-pension receiving retirees tax refunds, meaning that family inheritances will be whittled away if parents live too long! (That’s a bit of ironic humour, though with a pointed and relevant message.)

The Government should be pinpointing how Labor’s policies will affect a long list of Australians but the Coalition, at the moment, isn’t doing a good job alerting all the people potentially on this list. I’d start with anyone who owns a house and intends to sell it any time after the election. Throw in all financial businesses and their staff, such as mortgage brokers, and then small businesses or anyone who’d like to run their own business, which is a hell of a lot of young Aussies nowadays, and you start building a big group who could fear Labor’s ideas for the future.

To be fair, Labor is being helpful in supporting legislation to make it easier for small business to sue big business but generally the Coalition should be able to ‘sell’ to small business better than Labor but it needs to get marketing more effectively.

And I’d encourage what Verne Harnish, the author of the book Mastering the Rockefeller Habits found useful when he became a dad. He said via his knowledge of J.D. Rockefeller “that you need a few rules repeated often.” And good electioneering requires short powerful messages repeated often.

Tony Abbott won an election on short messages of “stop the boats” and “axe the tax” and so on. And that’s what Scott and Josh need to start pushing out.

For Labor’s part, with Bill and Chris making all the running, they need to be telling us that they’ll be wise when it comes to the economy. It’s one thing to be big on social justice and the environment but when you run the country, you need to be more balanced than the greens. (You have to revisit The Chaser’s old take on The Greens — it’s vintage Aussie humour. Check it out here:…)

I’d love Bill and Chris to tell us that while they believe in their franking credits policy, they know it’s too hard on some hardworking, honest saving retirees, who aren’t really rich, so there’ll be a $20,000 cap on any refund.

Then I’d like them to say that while they believe in the fairness of their negative gearing policy, they won’t introduce it when house prices are falling dramatically in places like Sydney and Melbourne because they know the people who might vote for them don’t want a house price collapse!

Labor can’t promise to be good policymakers in theory — they have to show that they’re wise enough to time their radical policies. The chart below shows how house prices fell and then rebounded after Paul Keating took away negative gearing and then put it back. Check out the period around 1985. 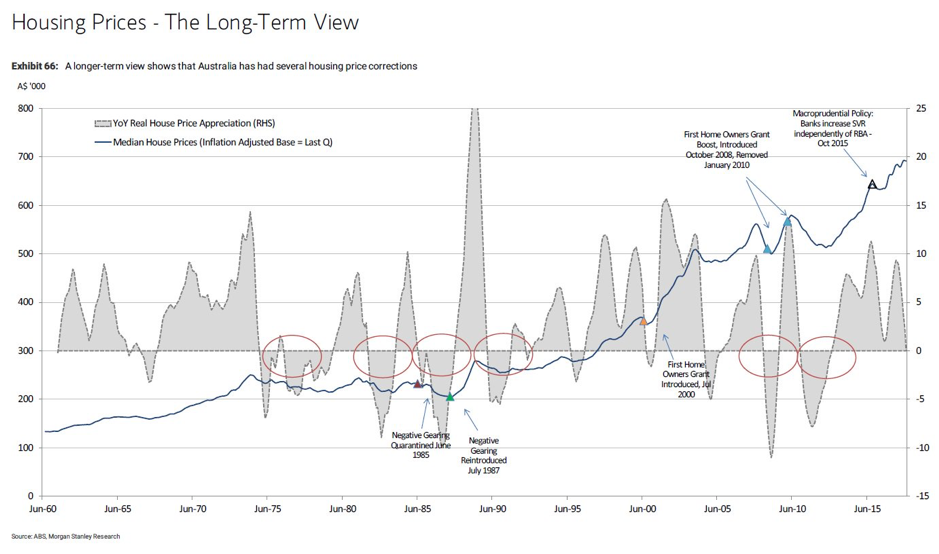 Finally, today will be a big test for Josh. Yesterday, employment rose by 39,100 jobs. Economists expected only 15,000 jobs but full-time jobs rose by 65,400 jobs, while part-time jobs dropped by 26,300. And no newspaper is leading with this great news story! Josh, you have to start doing your own town crying. And you better get up early and do it all bloody day or you’ll be in for a big pay cut in May!