China and the Aussie who can save us all!

With the media this week preoccupied with housing hysteria and why the Prime Minister said ‘no’ to a sausage sandwich from a countrywoman helper in the Lismore floods, I had the pleasure of hanging out with the people who, potentially, can save Australia from the economic Armageddon that alarmist media commentators are always stressing us about!

On Wednesday, I did a keynote address to the members of Food SA, which has some of the best food manufacturers in this country. If you don’t believe me, just contemplate some Coffin Bay oysters, a glass of Coopers Pale Ale or a SA wagyu steak with Maggie Beer caramelised onion, topped off with a glass of good old Grange!

As you can see, I’m talking about the best of Aussie products. This kind of talk not only makes you feel proud of what we can achieve, it also generates happiness. Yep, it’s the same feeling when your family or footie team achieves great things. It lifts spirits and produces dopamine in our bodies, which not only makes us feel good, it enhances our internal learning centres!

There is actually a virtual circle of concentrating on the positive rather than the negative, which then leads to the likelihood of being more receptive to learning stuff, being more competitive, more successful and, in turn, happy. It’s a virtual circle and that’s why I always try to spread this kind of thinking here in Weekend Switzer!

As I’ve often joked, for important reasons, if anything is worth doing, it’s worth doing for money. Leo Roston wisely advised, “money can’t buy happiness but neither can poverty.”

Last week, I pointed out that Albert Schweitzer effectively said happiness breeds success and people like Harvard’s Shawn Achor have pioneered the study of what he calls The Happiness Advantage. That’s what I think all our governments (Federal, State and Local) should be trying to manufacture rather than the usual frustration and roadblocks the public service can often deliver.

You might remember how I told you last year how Chris Jordan, the current ATO boss, spoke to a conference of small business owners in Bega. Chris revealed his attitude to what his organisation was trying to do — catch cheats and leave good honest businesses to get on with their jobs. His words brought a standing ovation from the crowd.

In Victoria, the State Government of three years ago, supported the Food innovation Centre, which is now hosted by Monash University. Dr Angeline Achariya, from the FIC, told the conference how this body was helping Aussie businesses take food products to market and was helping them crack the lucrative Chinese market.

This was the third time in one week that experts told me how we could “kill them in China” with our products, with the country producing middle class consumers as fast as we dig up tonnes of iron ore!

Angeline made the audience think outside their squares and comfort zones by asking who would buy a $300 box of chocolates? No-one put their hand up (though I called out “Yes, depending on how much trouble I was in!"). Laughing ensued.

I was staggered when my friend, Gary Beard of A.H.Beard fame, went public with their $76,000 beds sold into China! “In China there are 1,700 bedding manufacturers, all mass producing beds selling for up to $1,000 without a focus on quality,” Gary told the Western Sydney Business Access group. “The Chinese customers we deal with have extremely high expectations, they expect the highest quality and are willing to pay up to US$76,000 for Australian handmade mattresses.”

These are good signs, which need to be encouraged at the national level and needs to be bred throughout the country from Federal to State to Local government levels to semi-government bodies to industry associations. It should also be from business to business.

We need a national cheerleader. It should be the PM or the Treasurer or even the Minister for Industry, Innovation and Science, Arthur Sinodinos.

For too long our economy has been ‘quagmired’ in the negativity because of the GFC, the revolving door of Prime Ministers, the crazy Senate that has stopped policy reforms, the end of the mining boom and because of the preponderance of pessimists, who attract too much media attention. All this has hindered economic progress.

I caught up with Mr. Sinodinos in our Melbourne Sky studios on Thursday and he promised to come on my TV show (I will interview Arthur on the show on Monday 10 April, 2017). I’m going to see if he’s up for the job of pumping up Aussies and propagating positivity via better networking, marketing as well as providing well-placed assistance that will catapult our businesses into China.

It’s time we stopped stressing about Pauline Hanson, silly sausages in Lismore, Budget stress and silly people paying too much for Sydney and Melbourne homes, and start concentrating on inspiring great businesses like the ones I met in Adelaide last Wednesday.

And I was happy to see the pro-active Agriculture Minister, Leon Bignell, who stayed to listen to my speech, which was typically “rah-rah” and all about committing to change and learning from the best.

A rep from Visy was talking about clever Aussie growers of cherries and grapes, who have had boxes designed that scream ‘extreme quality’, which are for the discerning Chinese consumer. I’d buy the box just to keep the box! 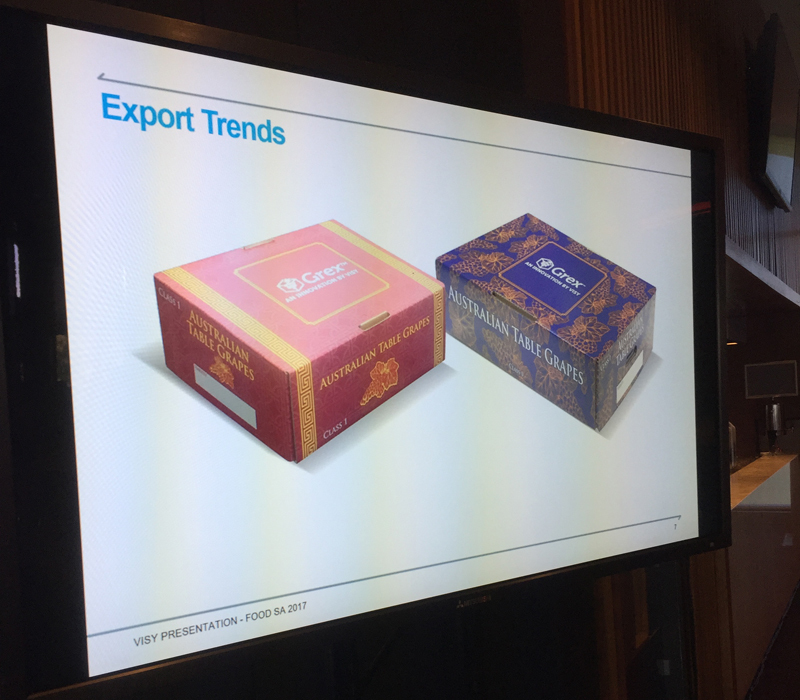 You’ve gotta love smart Aussies — they’re a huge inspiration and every young Australian (who are our future) needs to know about them like they know about Steve Smith, Lance Buddy Franklin, Ian Thorpe and Sally Pearson.

Our business heroes can really save Australia. Let’s start supporting them. Go Arthur!