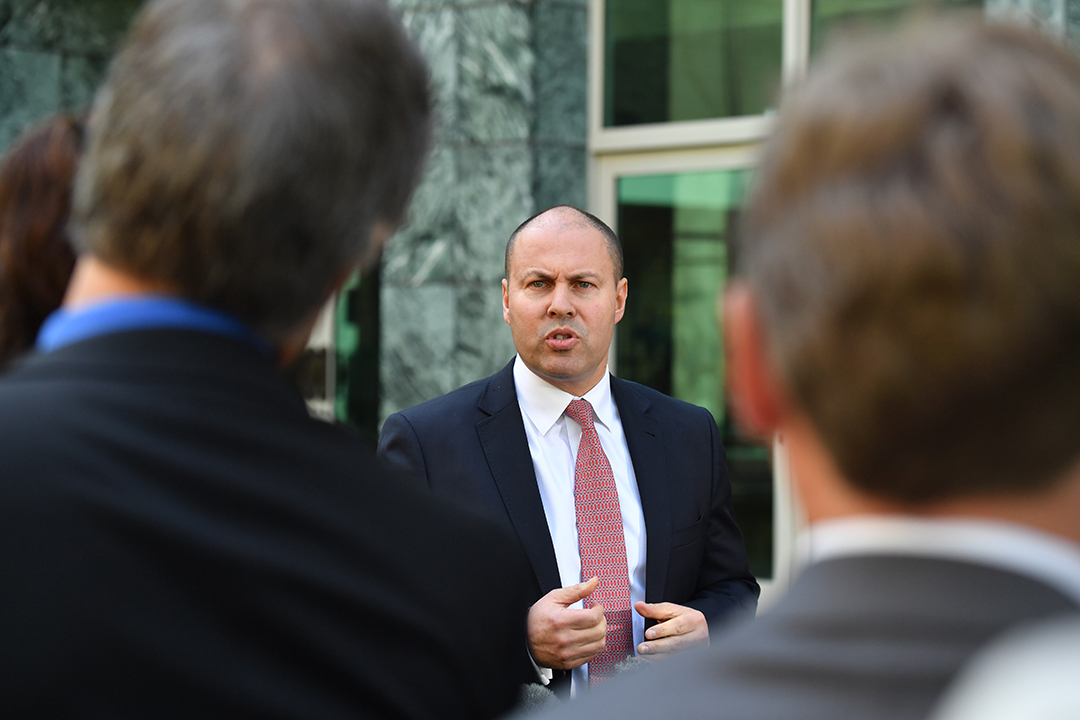 When Westpac’s Bill Evans gets political, you know he must be worried about the economy but to all observations his and other well-qualified commentator’s learned views are falling on the deaf ears of Treasurer Josh Frydenberg.

Sure, only last week I said that economics (despite my long history teaching and writing about it) is a guessing game. However, because it is such, I like it when my ‘guessing’ or forecasting coincides with people like Bill, who has form on the board in the economic crystal ball game.

Of course, they’re not always right. Many of the country’s best economists disagreed with me on my former TV show on the Sky News Business channel when I was harassing the Reserve Bank a few years back to cut interest rates. I got that one right and the RBA eventually (but belatedly) saw that rate cuts were necessary. I assure you I know I’m not always right and people like Bill and other chief economists are more right than they are wrong.

Against that, Josh is still a Treasurer on P-plates. Let me give you a history lesson about two of our most celebrated former chief number crunchers i.e. Paul Keating and Peter Costello, who made mistakes in their early days in the gig. They even made cock-ups later on their reigns but they’d neither admit to it nor recall it!

Interest rates (Paul) and super giveaways (Peter) are two areas where you could have a healthy argument about how great those decisions were. Of course, I cut Treasurers slack because guessing what the economy needs and when, isn’t an easy job.

Josh and new head of Treasury, Dr. Steven Kennedy, don’t have any known form on the board. The Doc has hung around the public service for a long time and has a great academic record and could be a genius but we just don’t know because his calls on the economy haven’t been public.

He and Josh are on trial on whether they should bring forward tax cuts to give the economy a lift, which Bill and many other publicly-exposed economists support. One day they will be judged guilty or innocent of the crime of being economic dunderheads or great economic managers but if I was them, I’d be careful of ignoring Bill (not the one named Shorten!)

This week, Westpac reported a sorry profit update (down 16%), which resulted in a cut in the dividend and a need to raise $2.5 billion in capital. The bank’s CEO, Brian Hartzer, told us that the final fully-franked dividend would fall by 15% from $0.94 to $0.80 per share for the first time in a decade because of a “challenging low-growth, low-interest rate environment”.

You can bet your life Brian had a good natter with Bill, who watches the economy 24/7 and has done so for decades. And what he told him made it hard for the CEO to say all the bad news is behind the bank, which I reckon he would’ve loved to have said.

After looking at recent economic data, such as the recent retail figures, Bill nailed his colours to the mast, calling for more tax cuts. “The second stage of tax cuts which the government has legislated to begin in July 2022 should be brought forward,” he said. “That decision would not compromise the structural validity of the cuts but would recognise that the Australian economy is in need of a boost to demand, from fiscal policy, much sooner than 2022.”

And Bill isn’t alone with the SMH telling us that the CBA’s Gareth Aird (another very experienced economist) is rooting for more tax cuts and wants the second and third tranche of cuts brought forward.

If this didn’t get us spending, then we’re all turning into Greenie socialists, who have no regard for material pleasures. I don’t believe that for a moment.

The economic data I look at day in/day out is only just limping forward. We know the economy’s last reading for growth was 1.7%, which is hopeless for future jobs growth. And Gareth Aird says the Government’s Budget isn’t helping.

“At present, the stance of fiscal policy adopted in the federal budget is contractionary. Growth in taxation is greater than growth in expenditure which is why the deficit has shrunk and the budget is now essentially balanced,” he said.

The respected SMH economics editor, Ross Gittins, has been agreeing with  the RBA’s Dr Phil Lowe and yours truly from at least June this year. Then he wrote: “First, worrying about deficits and debt, is something national governments can afford to do only when they’ve got an economy that’s growing strongly.

“The three successive quarters of pathetically weak growth we’ve experienced – complete with rising unemployment and underemployment - may prove to be just a blip, as the budget’s forecasts assume they will, but it’s much easier to believe they show the economy is fast running out of puff.”

And I love this from Ross, who has always been a great writer: “It’s not my policy to feel sorry for any politician – they’re all hugely ambitious volunteers – but I do feel sympathy for Treasurer Josh Frydenberg. He’s not the first treasurer to be strong on party dogma but light on economic understanding, but he’s among the first to be heading into stormy weather light on expert advice from a confident and competent Treasury.

In a recent Weekend Switzer story, I pointed out that successful people like Gerry Harvey say their success was linked to hanging out with the right crowd that showed them how to win. Josh, I’d start spending more time with guys like Bill, if I were you.