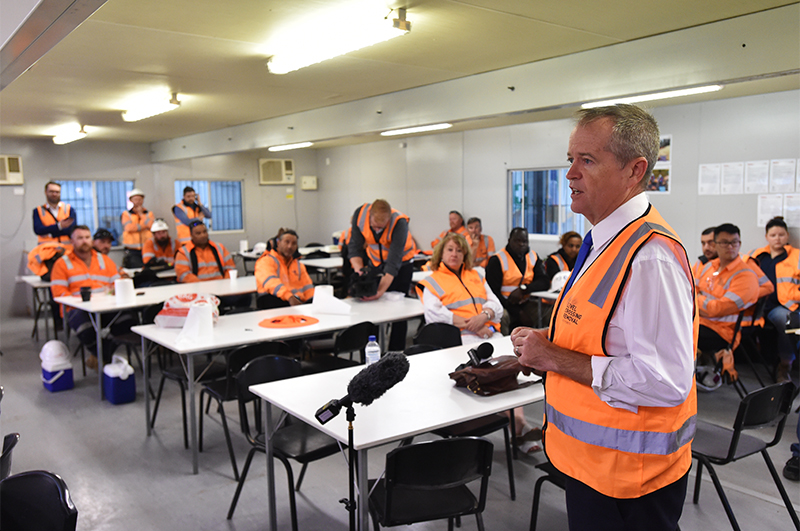 Can we weather wage rises in Bill's world?

Prime Minister in waiting Bill Shorten took out some insurance last week promising wage rises, which is bound to ring positive for many Aussie workers who haven’t seen a decent pay rise for donkey’s days. But the question is: how is Bill going to achieve this and could he be setting out to ruin the one really good economic story we have right now — the unbelievably strong jobs market?

Last week as economic growth faltered, economists like HSBC’s local chief economist, Paul Bloxham, told us that maybe the messages from the labour market might be more an accurate reflection of the real health of the economy than the growth of real GDP, or economic growth.

I’m not saying he’s right but a lot of other economists think he’s on the money, so it’s a fair question to ask: If we push wages up across the board, will it kill off jobs?

Interestingly, one academic economist has argued that raising the minimum wage might actually hurt job creation and therefore might be a problem for those on struggle street.

In his pre-politician days, Dr Andrew Leigh, a former Professor of Economics, looked at the impact of raising the minimum wage by 3% and concluded that youth employment could by 1.2%!

It comes as Andrew’s boss wants to introduce a “living wage” to replace the existing minimum wage.

The idea has been tried by the Poms and by the Conservative Party no less, but it was used to try and kickstart the economy after the GFC recession.

A study into the effects hasn’t yet shown up in unemployment but prices have been increased by those employers with businesses that can get away with it. Others have copped lower profits leading to other structures, such as using contractors.

Non-compliance is also on the rise but this would be a direct response to the fact that lots of business owners would be doing their best to cope with the hike in costs.

David Marin-Guzman writing in the Weekend AFR said if Bill opts for a living wage, it will “come after two years of record increases in the minimum wage at 3.3 per cent and 3.5 per cent.”

And even though wage rises have been weak, inflation has been on the soft side.

I’ve often argued that good economics is bad politics and bad economics is good politics. Significantly, Bill’s Finance Shadow Minister, Jim Chalmers went to the media after his boss had outlined his wage rise plans and told us: “It’s obvious to any objective observer of the workforce right now that ordinary working people aren’t getting a fair go.”

Well, I think I’m objective. I know we pay all our employees over the award but pay rises for all should not be a right for everyone. If the business has lost a major customer and profits turn to losses, how can you expect a business to increase wages because a politician, who wanted to be PM, says so?

Sure, they can do as they’re told by the government of the day, but a wage increase that increases losses or reduce profits and possibly increases the payroll tax paid will make a lot of employers think: “I will lose some workers and pay the existing staff a little more and I will avoid further losses or avert a reduced profit outcome.”

Bill Shorten says there has been a 10% increase in profits, while wages are up 2% but not all businesses earn profit at the same rate. And not all workers got a 2% rise — some got zero, while others might have seen a 5% increase.

If you have an economy going gangbusters, it’s more acceptable to have an over-generous government with pay rises but with growth dropping, house prices on the slide and the international economic outlook becoming  more of a worry, it seems crazy to raise wages across the board and ruin the one great story we have for the economy now — our job creation!

Labor wants the Fair Work Commission “to do the right thing” and lift wages for millions of workers. That’s why Jim Chalmers said, and I repeat: “It’s obvious to any objective observer of the workforce right now that ordinary working people aren’t getting a fair go.”

But this isn’t a just an Aussie thing — low wages growth has been a characteristic in many Western economies since the GFC. And anyway, we haven’t been tightwads with wage increases. As David Marin-Guzman pointed out: “The minimum wage has risen to 55% of median earnings, well above the average of comparable OECD countries.”

The one thing all economists from both left and right backgrounds agree on is that we need to raise Australia’s productivity. This can give us greater production and therefore income at lower cost, which can mean higher profits. Then these can pay for those beloved pay rises all workers like.

Of course, for this to happen, we’d need enlightened leadership at both the political as well as the business level. We can only hope because the worst thing we could aspire to is all of the unproductive pay systems that have brought us to where we are today!

With Shorten and Morrison racing to the top, Brexit, trade deals and franking credit debates, 2019 has been one crazy political rollercoaster ride! Join me at our Switzer Investor Strategy day in Sydney, Melbourne and Brisbane and learn how to maximise your current and future investments in a politically challenging 2019! Tickets are only $39.00 (valued at $149.00) and are available now. Click here and enter the code “SD2019” to get 25% off.