Can we trust the 'new look' business Bill?

The election question posed today is: “Can the new and improved ‘business-friendly’ Bill Shorten be trusted?” It’s the key question you have think about, if you believe businesses are important for job creation, wage increases and growing the economy to boost tax collections, which then can be used for needed social welfare and assistance to business to keep the growth story happening.

When I’ve heard some of Bill’s policy pitches in recent weeks, I’ve wondered if he understood the importance of business in the economic cycle. But in today’s AFR, Jennifer Hewitt tells us that Bill is giving himself a pro-business makeover!

Jennifer writes that “he won’t be controlled by unions, he insists, but will work with business as well as with unions.”

Given Labor’s dominance in the popularity polls during the Abbott, Turnbull and Morrison years, and given Bill’s tough anti-business rhetoric, especially to the “big end of town”, I recently wrote a piece that was headlined “You’ve got to hope Bill isn’t a liar!”

This is when he said he wouldn’t be pushed around by the union movement. But as his list of policies, which seemed so anti-business and anti-investor mounted up, I started to hope that Bill would prove to be a liar. And there’s a bit of history around good leaders being creative, talented, re-arrangers of the truth.

Remember John Howard said he’d never introduce a GST, though he did have the guts to propose one ahead of an election when he decided to change his promise. Of course, the famous Julia Gillard ‘porkie’ on a carbon tax was an unforgettable pre-election lie. I don’t think Gillard recovered from that big U-turn on truth.

Bob Hawke and Paul Keating of the pre-election campaign in 1983 were very different beasts to the ones who, when in power, deregulated the banks and the dollar, reduced trade protection and got the unions to play ball with business to boost productivity and create jobs. As a young economist, I was staggered when I saw that the share of income going to profits compared to wages under Hawke and Keating actually increased but workers saw the benefit as jobs increased as the national economic cake grew.

Many of those aggressive changes depowered the union movement and encouraged business and explain a lot of the economic growth over the past 28 years that has beaten off the threat of a recession, which is a world record!

So lying PMs or leaders, who don’t give us the full picture on what they’ll really do, can actually end up being OK for the economy and the country. However, is Bill a liar you can trust?

Jennifer’s not convinced. “The catch for the Coalition is its own record does little to inspire the confidence of the business community either. From energy policy to industrial relations to economic innovation, the government is considered to be either missing in action or punitive in its approach,” she reminded us.

If I throw in more anti-business stuff from Bill, such as penalty rates and promised wage rises for low to middle-income workers, then employers who own businesses or represent the shareholders who do, have to be a little worried about the Bill Shorten we’ve seen until today.

At Labor’s launch, business was pushed into the background as there are more workers who are voters than there are business owners, so Bill has gone long on promising higher wages. On wages, Shorten said Labor would restore penalty rates, legislate a living wage, intervene to pay childcare workers more and put in place incentives for businesses to invest and employ more.  “If we win this election, our priority is not making the rich very richer. It is getting wages moving again for working people, starting with laws to reinstate our penalty rates in the first 100 days,” Shorten said. (The Guardian)

All this makes Bill look like a lackey of the union movement but his promised $10 billion boost to investment shows that he might prove to be pro-business, if he can be trusted.

Under Labor's Australian Investment Guarantee, all Australian businesses would be able to immediately deduct 20% of an investment in eligible depreciable assets over $20,000, with the balance depreciated in line with normal depreciation schedules from the first year.

This could be good for big and small business and it comes as business investment has been having a shocker and is at a 25-year low, as the chart below shows. 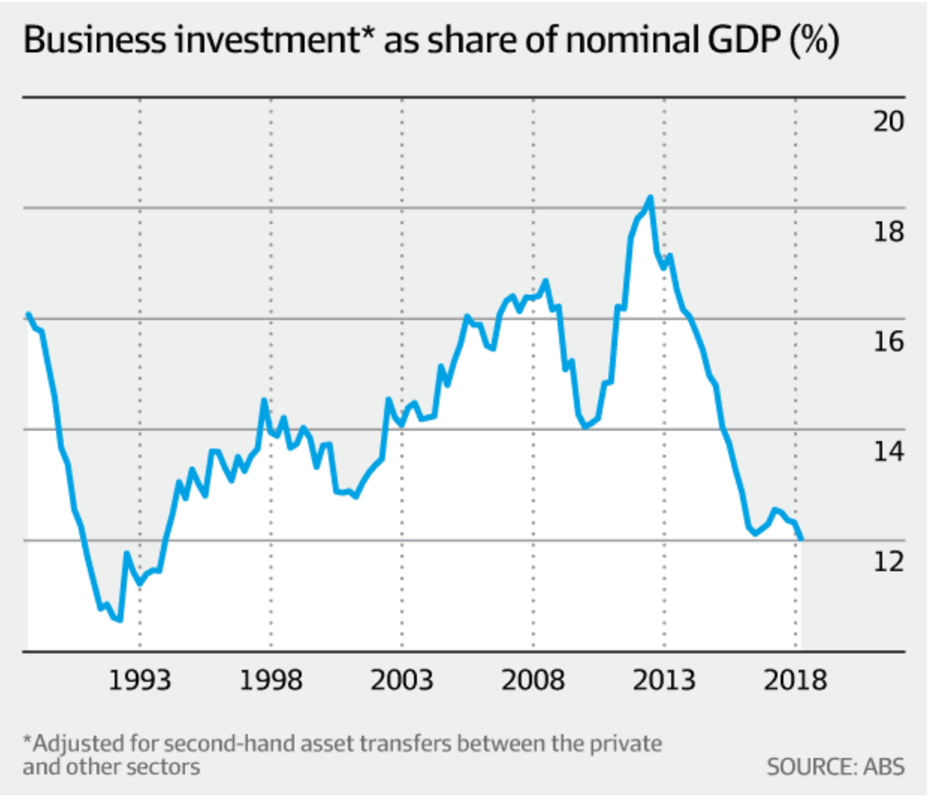 This new and improved business-Bill looks a little phony and timed to win swinging voters in the last few days of the election campaign.

That said, when I dealt with Bill as a Labor Minister under PMs Rudd-Gillard-Rudd, my memory of him was one that was more right than left. When I interviewed Graham Richardson two weeks ago, he told my Switzer Investment Strategy Day audience that “Bill has always been of the Right.” My reply, which the audience agreed with, was: “Well, he looks left to me!”

Admittedly that audience was largely older self-funded retirees, who are being robbed of the tax refunds successive government finance ministers, including Bill himself when he was head honcho of Superannuation in the Gillard Government, had thought OK.

Elections encourage rearrangement of reality by would-be PMs. Richo implied Bill is saying everything to get himself across the line on Saturday because if he loses, his career is finished.

I reckon Bill will be more pro-business than many of us think because he’s a pragmatist. If he wins, he’ll inherit an economy that could easily slow down markedly. Therefore his policies of smashing investors, banks and wage-paying employers might have to be delayed or even dropped to ensure his Government doesn’t see the recession that has eluded us for over 28 years.

As a politician of Bill’s persuasion, Bill Clinton told his Democrat colleagues: “It’s the economy, stupid.”

That’s why I hope Bill is a liar when it comes to his anti-business and anti-investor rhetoric. Fortunately, if he’s not, the Senate could easily get in the way of his more counterproductive policies, such as making self-funded retirees relatively poorer by denying them tax refunds.