If you want to be bearish on stocks, don't look at these figures!

Can these positives trump the Trump negatives for stocks?

We wake up this morning to some revelations that might eventually negate the negative effects of Donald Trump and his terribly troublesome tweeting for the stock market.

To be accurate, I don’t think we can ever feel confident that Donald won’t get a rush of blood that will turn into a tweet that can send Wall Street investors running for the exits or pressing the sell buttons, but what has shown up today explains why we can live in hope that stock prices can resume climbing.

The positives I will reveal can cancel out a lot of the Trump negatives that come via his tweets. And provided Donald doesn’t go for nuke-like options, such as declaring war on Russia, changing his mind on pulling out of a trade war with China and so on, then we just might see stocks start trending higher.

First, US stock markets have to like the news that based on the 52 companies that have reported and their earnings out of the important S&P 500 Index, profits are up 30%! That’s huge! And remember, the consensus was that the number would be around 18%. And while it’s early days, this is a great start.

It says US companies are really healthy and if this story carries through to a lot of the 500 top businesses in the Index, then Wall Street will go higher and our market will play follow the leader.

Other reporting season facts that look like good news for anyone who wants stocks to rise are:

• 79% of the companies that have done show-and-tell have seen their earnings beat expectations.

• 83% had better sales than forecasts.

Here’s a typical great Yank summation of the story so far. “These are just slam dunk earnings,” said Nick Raich, CEO of The Earnings Scout. “If you want to be bearish on stocks, don't look to earnings.”

And don’t look to the economy either, if you want to believe the future isn’t rosy.

The Federal Reserve published its latest Beige Book, which is an extensive look at the US economy. The key take out was that it all remains positive. There were good signs for jobs, wages and inflation cementing the view that the economic outlook will be a positive that could help cancel out any possible Trump tweeting ahead.

The one standout concern was rising steel prices that have been linked to the Trump tariff-talk.

But don’t just take my word on the economy, cop it from Goldman Sach’s CEO Lloyd Blankfein, who gave the US economic ‘machine’ a big thumbs up.

“If you divorce yourself from a general feeling of anxiety and just look at the facts and the numbers and what you can measure, you can say things look awfully good, and it feels like awfully good in a way that there could be a bit of a runway here for things to remain pretty good,” Blankfein told CNBC.

Adding to this positivity has been a recent Trump trend, which you might have noticed and I think it’s linked to the arrival of Larry Kudlow as the President’s new economic adviser.

Kudlow is a former Bear Stearns chief economist, who has hosted CNBC business television shows for decades. He knows Wall Street better than most and I suspect he’s behind the President’s recent quick follow up positive tweets, which seemingly negate the previous negative tweet.

And like a ping pong game, Wall Street moves up and down as the tweets ‘cross the net’ from the negative court to the positive one. It’s something that long-term market watchers, like yours truly, have never seen before.

But it’s not all positive stuff out there.

But it’s not all totally positive stuff out there.

Bank of America Merrill Lynch surveys global fund manager and the latest one surveys 176 money managers and 40% say the stock market peaks in 2019 or beyond. Some 20% says it happens this year, while 18% say it’s already happened.

You won’t be surprised to learn that I’m in the 40% group.

The chart below shows the survey results: 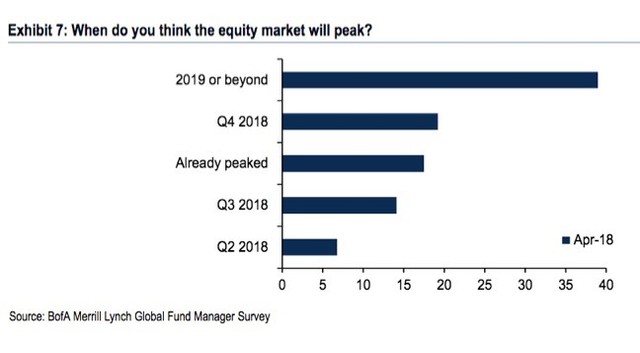 So more fund managers are relatively pessimistic about stocks after 2018, than optimistic. So how do I reconcile this with the great profit and economy stories outlined above?

Well, the great economist John K. Galbraith once cheekily noted that “In economics, the majority is always wrong!”

And I reckon that goes double for the stock market. So I’m running with the minority of fund managers on this one.