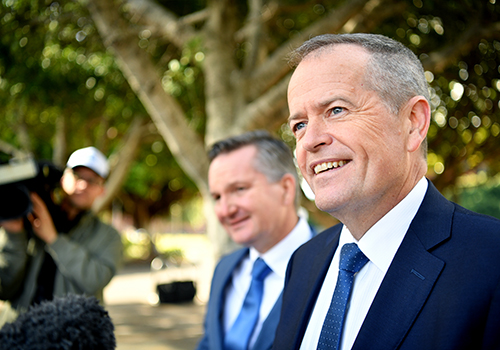 Can Shorten and Bowen have a "come to Jesus" moment?

Last weekend, Treasurer Josh Frydenberg tweeted about the failure of the Labor Party to give an official reaction to the Hayne Royal Commission recommendations. It’s not clear what this delay means but it could actually be bad news for the Coalition if the Opposition, which looks like a shoe-in to win the May 18 poll, is actually stopping and thinking about what its policy response will be!

If we must have a Labor government, let’s hope it’s of a Hawke-Keating ilk, rather than the failed Rudd-Gillard-Rudd show. Bill Shorten and Chris Bowen (his would-be Treasurer) had me worried when they were saying that they would be implementing the recommendations of the RC even without seeing them.

Two weeks ago, a Labor-inclined tweeter piled into one of my twitter debates, even though we weren’t arguing over the RC, asking: “Why would anyone even question or want to change any of the Hayne recommendations?”

I wanted to tweet but it was Friday afternoon (close to the nation’s happy hour, when frustrated political commentators are on the prowl), so I just let that twit/question go through to the keeper.

I reckon 20,000 mortgage brokers might have an answer to that question and it might be summed up as RC’s make recommendations but politicians make policies based on their good or well-meaning ideas but they might have practical and implementation issues.

I like the idea that a future Labor government might be a thinking government and I hope that’s what Bill and Chris are up to. They’re decision on mortgage broking will be their first test.

Their second test will be about the timing of their changes to negative gearing and the reduction in the capital gains tax discount.

Chasing investors out of the housing market as some property prophets of doom are tipping 30% house price slumps in Sydney and Melbourne, doesn’t look like smart economics. I think these forecasters are crazy but if we add negative gearing changes to a weakening housing market, just as the RBA is expecting a slowing Aussie economy, then hitting the two strongest and biggest economies in NSW and Victoria, wouldn’t look like smart economy-navigation from a future Labor government.

And what if a US stock market slide happens over 2019 or maybe 2020 and a Labor government has reduced the capital gains discount and chased retirees out of the stock market by denying them tax refunds? We could see a policy-created economic pickle.

Remember, the housing price boom was RBA-created via historically low interest rates, while the house price slide lately wasn’t just a demand, supply and excessive prices issue but it was helped by APRA, the RBA and Royal Commission influences.

Opposition leaders often throw caution to the wind in discrediting their Government foes and Bill Shorten is on a roll in that department. But eventually he will have to embrace a leader ‘for all Aussies’ stance. We saw it with Bob Hawke and Paul Keating when they signed up for deregulation of the dollar, the financial system and other over-protected industries. I remember doing an editorial on Triple M, in the old Doug Mulray show, where I paralleled the change of attitude of the then-PM and his Treasurer to that Bible story of Transfiguration.

The promotion from Opposition leader to PM comes with responsibilities and insights and like the disciples who went up the mountain with Jesus, they should become more knowing and insightful. Well, that’s the hope and I’m hoping Bill and Chris are practising being transfigured!

The last poll of 2018 on December 10 had Labor with a 10-point lead over the Government. On 2GB, Labor stalwart Graham Richardson said it was all over, telling listeners that “people have stopped believing in miracles”. His jousting rival, News Ltd’s Andrew Bolt agreed that the new Morrison Government was doomed.

“They hoped that Scott Morrison might’ve pulled a rabbit out of the hat. He might’ve if they’d given him the chance but you see how Malcolm Turnbull has done his best to destroy his chances.”

The only bright spot for the Coalition was that ScoMo was preferred PM but Bill Shorten never seems to be able to win that ‘beauty contest!’

Fast-forward to the first Newspoll of 2019 and low and behold, some good news for ScoMo. This is how news.com.au reported it: “This week’s Newspoll, conducted January 24-27 from a sample of 1,630, gave Labor a 53-47 lead, a two-point gain for the Coalition since the last Newspoll in early December. Primary votes were 38% Labor (down three), 37% Coalition (up two), 9% Greens (steady) and 6% One Nation (down one). This is the equal closest Newspoll result since Scott Morrison replaced Malcolm Turnbull as PM.”

Coalition voters are impressed with Scott Morrison’s campaigning and believe he might have been a good chance, if he’d been in the top job for more than a year. But he still has to live down the revolving door of leaders in the past few years and he has a rival team that looks strongly unified.

Unlike Paul Keating, who won “the sweetest victory of all” election in 1993, Scott Morrison doesn’t have an opponent with a 15% GST and I don’t think he can get Aussies as scared as they were 26 years with a scare campaign on changes to negative gearing, the capital gains discount and retirees’ tax refunds!

Over the years, I’ve wondered why 4.7 million employees in small business can’t be mustered by employers and the Coalition to support them at election time. The simple answer is that many business owners care about their business, they don’t relate to policy issues and they are not political with their staff.

The interesting issue for this year’s election will be if the Coalition is right that 800,000 retirees will be affected by the tax refund ban. If these Aussies campaign to their families and in particular if they remind their loved ones that Bill and Chris will “shrink your inheritance”, then it could be a hip-pocket issue that more voters could get concerned about.

It looks like a plan but if history is any guide, the Coalition hasn’t been especially good with PR, unless it was bad PR!

Given that, I’m praying Bill and Chris have a “come to Jesus” moment ASAP.