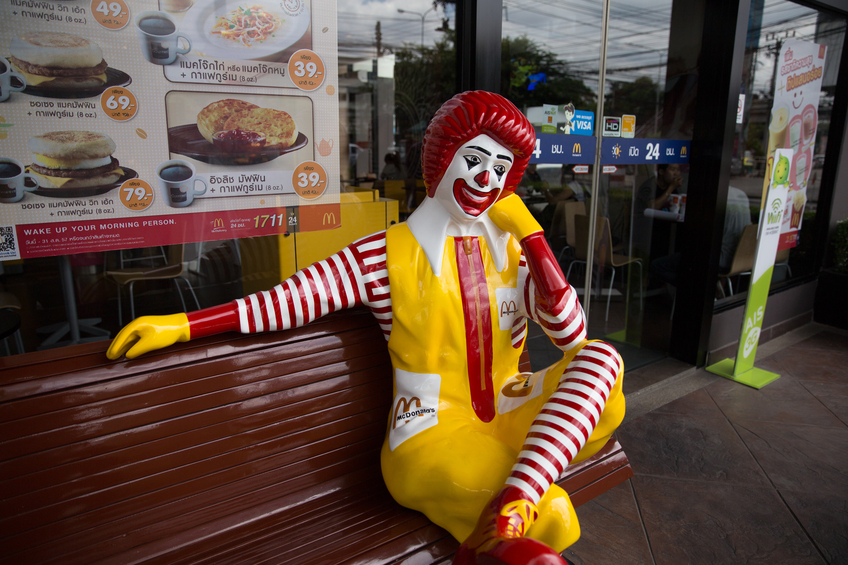 Can our economy stand us voting for Ronald McDonald lookalikes?

Following the election we didn’t have to have now, it’s pretty clear (as the old Cape Kennedy warning went): “Houston, we have a problem.” In fact, we have more than one problem and it’s going to take a great leader to change things for the better.

On Saturday, for Weekend Switzer, I wrote about leadership under the headline “A leader with guts. How good would that be?”.

Clearly, Malcolm didn’t read it after his crazy, ‘hide in the house’ stunt on Saturday night, which ultimately saw him flushed out by Alan Jones on the Seven Network’s coverage.

Meanwhile, over on Sky News, Andrew Bolt was calling for Malcolm to resign. On the ABC, they were waiting for Bill Shorten to make an appearance — that was gripping TV!

On the night, I’d been invited to go to the Carlton versus Collingwood match at the MCG, which was an arm wrestle akin to the election battle going on at the same time, but at least there was a winner.

I knew the poll would be close after going to a shop in Melbourne on Saturday morning, where the owner told me he was going to vote for Ronald McDonald. When I asked him why, he said he could never vote for Bill Shorten — “a union puppet” — and he expressed disappointment in Malcolm Turnbull.

His store is new-age but he listens to Alan Jones via the internet and, in fact, he said he rang 2GB after Alan interviewed the PM to say what a “soft interview” it was!

I asked why he wanted to vote for Ronald McDonald? “I’d rather vote for that clown than those clowns in Canberra!” he said.

If anyone doubted we had a leadership problem, this election result should have changed that delusion.

Earlier this year, when early election talk was on, I argued that our economy, which was on the improve, didn’t need an early election. However, as the weeks dragged on and Malcolm was playing his double dissolution card, I thought he must have had a cunning plan of Black Adder proportions, which would’ve seen him in a stronger position with a less feral Senate.

The economist in me pined for a government (even if it was Labor!) that had control of the Senate so we could pass Budgets that would beat the deficit/debt problems that one day, if not fixed, could see us lose our AAA-credit rating.

Given the kind of country we now have, with the issues its population care about and with the leaders we have, this isn’t going to happen until a great leader surfaces. It’s not Malcolm (I hate to say) and it’s not Bill or Anthony Albanese.

And it’s not Tanya Plibersek, though she has more potential than the lot above, but she’d need to start representing more Australians. She presents well, is smart and tough but she doesn’t relate to small and big business. She’s so ABC and her pitch is always for the left, the battlers, etc., when this country needs a leader who appeals to big and small business, right and middle of the road people and some sensible lefties, as well as those on struggle street.

Bob Hawke managed it and so did John Howard, but real lefties always hated him. That said, he appealed to enough Australians to win four elections and he was the PM that carried our economy forward, best explaining how we have grown for 25 years without a recession.

Of course, these are tougher times to be a PM.

David Cameron learnt it last week and so did Kevin Rudd, Julia Gillard and Tony Abbott, but these people were never the leaders to appeal to a majority.

Ironically, Rudd learnt to win over the country but the people close to him (his own Labor team) despised him. But he didn’t lose out only because he was unlikeable. It was because he was a poor leader.

Let’s go through them and here they are:

I could go on but you can see what a great leader would have to address to come up with answers that a majority would like. I don’t think either Malcolm or Bill came out with a believable narrative to win over a majority with so many gripes. And there are many!

When I asked my Melbourne shopkeeper what he was most annoyed about he said, wait for it: “Parliamentarians can take their super before they retire from work tax-free and can keep on working, which is something we can’t do.”

He might not be 100% accurate on this subject, but it’s what he believes. At the heart of his complaint is that he thinks pollies look after themselves and don’t give a hoot about their so-called followers.

John Maxwell who wrote the book The 21 Irrefutable Laws of Leadership says if a leader looks around and can’t see any followers, then he’s not a leader, he’s just going for a walk.

Everyday I receive emails from Malcolm Turnbull’s team and I haven’t read one of them! That’s the lesson Malcolm. Don’t listen to the ‘experts’ on the electorate or the media. You can see where that got you.

You don’t have to listen to Andrew Bolt either and resign, but Jonesy did give you good advice while he was doing the election coverage for Seven. Talk to your people, listen to them and tell them something optimistic — this is what his words effectively said when he was trying to get you out of your house on election night.

If you win this election, you have three years to become a leader and, as Einstein allegedly noted: “Insanity is doing the same thing over and over again and expecting different results.”

I don’t care if he didn’t say this, it’s great advice and you really need great advice at the moment because what you’ve been receiving has been insanely bad.

Our economy needs strong, credible leadership, as it affects both consumer and business confidence, which feeds into investment, economic growth and jobs.

Your election war cry was about jobs and growth and now you have to make them happen, so let’s start on your leadership. It’s time to show some guts — get outside your comfort zone and become the leader this country is crying out for.

I’ve known you since we were both 21 at North Bondi Surf Club and I’ve always liked you, but your discomfort zone always looked like having to deal with the people you now have to lead.

One thing I learnt hanging around people in the surf club was when there was a big wave on and you had to race in it, someone would always say: “No guts, no glory!”

Our economy is doing well by international standards, but can it take a hung, lame duck Government with right-wing Libs ready to hang a lame duck leader?