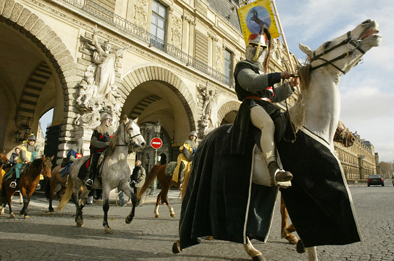 Can Joe ride the iron horse out of the Budget?

With the Greek debt tragedy looking like a soapy of Days of Our Lives proportions, the big focus this week, believe it or not, will be what happens to the iron ore price.

With this commodity’s price being critical to the Budget’s bottom line, it could be said that Treasurer Joe Hockey is set to ride the Iron Horse! (The Iron Horse was actually the Mare of Steel that comes from the 1964 movie The Longships, where Vikings were made to ride this horse made of a metre wide razor blade that chopped riders in half!)

Certainly I exaggerated Joe’s plight but the price of iron could not only make the Abbott Government’s deficit/debt reduction credentials look like a joke but a bad response to the Budget (or a bad selling effort) could end the Treasurer’s career and even cut short PM Abbott’s rule.

Iron ore prices have fallen from a high of $US180 a tonne in 2011 to a low of around $US46 and the fears of it going lower was such that the Treasurer was said to be working on a Budget using $US35 a tonne! If this happens, it could rip $25 billion out of the Budget over four years.

When Tony Abbott took power in September 2013, the price was $US100 a tonne but last year’s Budget was worked out on a ‘guess’ of $US60! This could be embarrassing for Joe on Budget night when he tells us how he did with his first Budget and how he hopes we believe him for his next one.

Well, good news for Joe and Andrew Twiggy Forest, who owns Fortescue Metals or FMG. The iron ore spot price spiked again after a good week for the metal’s price. I got this from a newsletter called Platts, which follows iron ore:

“There was a major surge in the seaborne iron ore spot market on Friday as demand and confidence returned to energize a nearly two-week rally. Platts assessed its 62% Fe Iron Ore Index up $US3.75 from Thursday to $US58.50/dry mt CFR North China,” it reported.

When we closed up shop on Friday, the price was $US54.82. We should see some good share price news for BHP, Rio, FMG and others today.

As I pointed out in the Switzer Super Report  to my subscribers on Saturday morning (yes, I do write on Saturdays!), this could push our S&P/ASX 200 index over the 6000 level. It closed at 5933.3 on Friday.

If it can be sustained, this price rise will be great news for Joe and the country’s coffers, as well as our goal to trim the Budget deficit that feeds our government debt, which is around $240 billion, heading towards $300 billion.

Believe it or not, but Joe might have had his first win in a while, with BHP ‘deciding’ to slow up its production, which triggered this spike in the iron ore price. And while the Treasurer went public to say he doesn’t try to influence public companies (which are answerable to their shareholders), there are whispers that pressure from Canberra is being felt in the boardrooms of BHP and Rio.

Is this a big deal for ordinary Australians? Yep, I’d say so. Many of our super funds hold BHP and Rio and their share prices rising is a good thing. Also, if the iron ore price KO’s the Budget deficit reduction program, one day our AAA credit rating could be affected and that could push interest rates up for all borrowers!

Some experts have tipped that iron ore could go as low as $US25 a tonne, so what we’re seeing now is unexpected good news. Let’s hope it lasts.

And spare a thought for Andrew Forrest, who is the major shareholder of FMG, which borrowed $2.3 billion last week at nearly 10%. While this sounds like pressure-stuff, it all becomes easier for Forrest as the iron ore price heads north.

If the price reverses this week, both Joe and Andrew will have billion dollar headaches!