Since Malcolm Turnbull has been running the show, is there anything he can crow about? Let's take a look.

Bolt hints economy and PM are crap. Is he right?

After I finish my TV show on the Sky Business channel, I listen to my Sky News and 2GB colleague Andrew Bolt talking to Steve Price. I have eclectic listening habits to ensure I try to be balanced.

Andrew isn’t a great fan of Prime Minister Malcolm Turnbull and is clearly a big supporter of Tony Abbott. Last night, he put out a challenge to his listeners to let him know one thing the new PM has done for this country and in the 20 minutes I was listening, I heard no one come up with anything that would’ve made Malcolm proud.

The underlying message was the PM and the economy are crap, though Andrew is too gracious, generally, to say it.

I couldn’t help disagree with him on the economy — it’s not crap. And on Malcolm, he has done one thing worth applauding, but it has been so badly promoted that no one on 2GB rated it as important!

Steve Price reckoned Malcolm beating Bill Shorten counted as a good thing but Bolt didn’t count that, presumably assuming that Abbott could’ve done that, which is debatable. The one good thing the Turnbull Government has initiated was the National Science and Innovation Agenda, which should help encourage future entrepreneurs and encourage existing businesses to look to the Government for financial support to create, say, a new CSL or ResMed. However, this was hopelessly sold to the wider public.

In fact, even a lot of CFOs from mid-tier companies thought it was purely for start up companies when it actually could help existing highly innovative companies. This was good policy badly sold.

The one other area where Malcolm could argue with Andrew is the economy. Since he’s been running the show, both the economy and the stock market have improved. And while I bagged the Budget for some of its unfair super changes, the general guts of the Budget was well received.

Malcolm took over the keys to The Lodge in mid-September and both consumer and business confidence has headed up since that time. I reckon this is the area where the PM can most crow about.

When Tony was dumped, business confidence had slid from 8 to 1. It’s now 6. That’s a good number, a tick above the long-term average.

The big win for Malcolm is with business conditions, which NAB uses to measure what businesses are saying about how their business is going now. The number rose from +9.7 points to +12 points in June and the long-term average is +4.8 points, so that’s a big plus for the PM.

Let’s go to consumer confidence, and this is now up 8.4% on a year ago with the ANZ/Roy Morgan survey, and here’s the chart from Westpac’s stats to show it.

When Malcolm came in, the confidence reading was close to 92. Now it’s around 99. It got close to 103 but elections and poor campaigning by the PM didn’t help. Also, Bill Shorten’s scare campaign and Brexit spooked a few consumers. 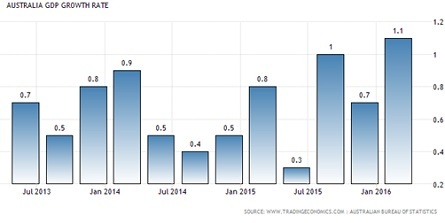 The last reading under Tony was 0.3% for the July 2015 quarter. Since then, it has been 1%, 0.7% and 1.1%. It’s actually hard to blame PMs for good growth under their watch because some of Malcolm’s good story has come from Tony and Joe Hockey’s efforts, especially the small business $20,000 tax offset for small business, but it is what it is. The economy has got better under Malcolm.

Well, here it has gone from 6.2% under Tony Abbott to 5.8% now. What a lot of economists were tipping last year was that the jobless rate would go to 6.5%. Under Malcolm’s reign, this misery measure has improved. Once again, I think Abbott and Hockey helped these numbers but the confidence effects post-Malcolm have also played into the mix. 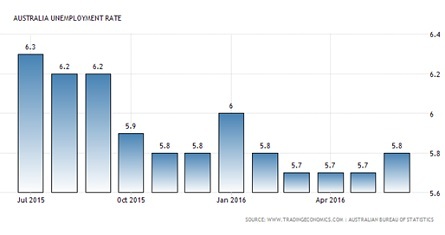 What about the stock market? The chart tells it  all. 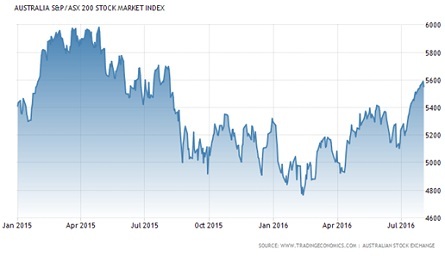 Under Tony, the market nearly reached 6000 but started to slump, but since February this year has made a nice comeback, getting close to 5600. The slide started under Tony, got worse when he left but now is trending higher, as company profits are expected to be on the rise.

Once again, there’s a lot of other factors in all these numbers from Hockey and Abbott’s efforts to lower interest rates, better commodity prices and so on, but the case is pretty clear that business, consumers and the overall economy have actually improved since Malcolm replaced Tony.

I’m not arguing it’s all Malcolm and in fact, I’m saying a lot of it was Tony and Joe, but it’s wrong to bag the economy. It’s actually doing well. These latest rate cuts are because inflation is low, which used to be a good thing, and the RBA wants the dollar to fall below 70 US cents.

Our dollar is high because too many damn foreigners actually disagree with Andrew and think our economy is better than most!

Sure, it might be the best house in the worst street but we shouldn’t be too dismissive of how good our economy is lest we contribute to making it worse.

By the way, if we can keep growing at current rates, the Budget Deficit will fall and that’s something Andrew Bolt justifiably is worried about.

I often write this but it’s always relevant — as Bill Clinton reminded us: “It’s the economy, stupid.”