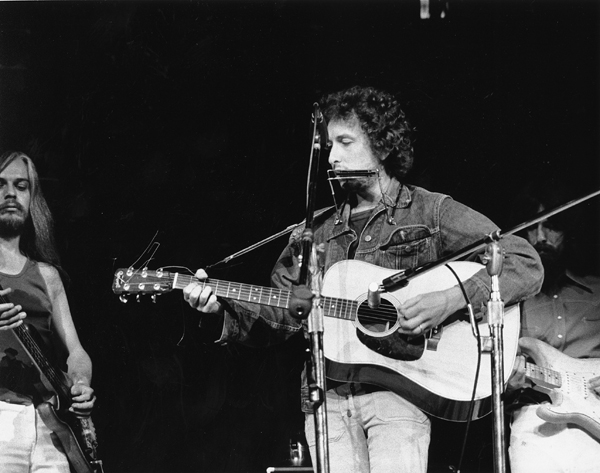 Bob Dylan warned us about Trump and the Internet!

Right now, Donald Trump is cashing in on an anti-new age sentiment that has made a lot of Americans fed up with the present and scared about the future. These people want Donald to build walls against Mexicans, Chinese and the establishment that has taken away jobs and the way of life these guys and gals miss.

If you want a simple picture of what I’m talking about, just think about a New York taxi driver whose life has been made more difficult because of Uber. Taxi drivers here in Australia, in France, Spain and everywhere that Uber has gone would share this New Yorker’s pain and AOL founder, Steve Case says this is the second wave of the Internet.

He was a major builder of the first wave which was getting people connected and the appeal of what was on the Internet was brought to the general public by the likes of AOL in the US and Telstra and the PM’s old firm, Ozemail. These companies not only connected consumers to consumers via email, businesses got connected to each other and productivity followed. However, it also connected businesses to consumers and sales resulted. Price competition also started and I remembered an antique seller in Queen St. Woollahra told me he sold an old Dunhill Lighter for thousands of dollars to a buyer in the US, on something he experimented with called eBay!

Not long after that, a mate had a barbecue, during which he kept running to his desktop computer to see what bids he was getting for his old golf clubs.

I recall thinking: “That’s going to catch on — not!”

How wrong was that future call, with 11 million people in Australia going to eBay once a month, including hundreds of thousands of small business owners, who are now exporting via this service.

And a majority of the buying is now being done via smartphones, which is what surfed into our lives with the second wave, according to Steve Case in his New York Times bestselling book The Third Wave: An Entrepreneur’s Vision of the Future.

The second wave also saw companies like Google and Facebook leverage off the Internet to create search and social networking capabilities, while apps like Snapchat and Instagram were born and grew out of the smartphone revolution.

More than 10 years ago, I warned of a certain irony of how many disenfranchised workers hate the likes of Uber and Airbnb, which have made life hard for lots of workers in transport and hospitality. However, these same complaining people use the Internet to buy cheap clothes from China online that take retail jobs from real people in the non-online world.

We hate the Internet when it takes our jobs or lowers our wages or our profits but we love it when we’re on Facebook, Instagram or buying a suit $300 cheaper than in the shops.

You can see why some older Americans are relating to Trumps promise to stop the new world and help them get off.

Brexit was about that, with a pile of Poms unhappy with the EU, globalisation and digitisation of their worlds. They want Old Dart back but they weren’t really aware of how their lives would be affected.

For many, Brexit means it’s back to Blackpool for holidays and it will no longer be that cheap flight to the island of Lemnos in Greece, with a two-week holiday with a valuable pound compared to the struggling euro. Since Brexit, the pound has fallen 22% in a year and if you’re a Pom who lives in Europe on what was once a valuable UK pension when it converted to euros, you’re 22% poorer, thanks to Brexit!

So, what’s the third wave? Will it be a better ride on a slow forming gentle wave all the way to an inviting shore? Or will it be another dumper, like the second one?

The Third Wave will see entrepreneurs vastly transform major “real world” sectors like health, education, transportation, energy and food. The second wave took jobs off taxi drivers, retail shop assistants and the like but white collar jobs are going to be under pressure. If you want example, then just think who might lose from that new age term — robo-advice? Accountants, lawyers, financial planners are all going to be challenged by this concept and it’s already here in its infancy. It will create business but it will also be a new paradigm for many professionals and there will be goods and bads.

Who knows, if Donald loses this election on November 8, he might ride again with more disenchanted supporters — victims of the third wave dumping.

Another third wave take on the future will probably be the proliferation of drones delivering stuff, but I only hope we can say no to this potential threat to our peace. I suspect this is a forlorn hope!

Steven Case neatly explains what tech-heads call the "Internet of Everything", where every part of our lives will rely on an internet connection. “He sees this new wave defined not by hardware or software but by partnerships—especially between business and government. New partnerships, Case believes, will be able to change the way our institutions, like healthcare, education, and agriculture, integrate the internet into our lives,” wrote Hope Reese on TechRepublic recently.

In an interview with Reese, Case shows us what lies ahead with the Third Wave: “I'm still struck how many big parts of our lives haven't changed all that much. Those are some of the things I talk about for this third wave.

“How do you really change classroom learning so it is more personalised and adaptive? How do you really change healthcare so there's more convenience, better outcome, and more precision? There have been some changes in those sectors, but the way we teach has remained about the same. The way most doctors practice and the way most patients are treated is about the same.”

The third wave ahead looks threatening like the second wave and the recent Nobel Prizewinner, Bob Dylan once prophetically said in his classic, The Times They Are a-Changin’ song:

And admit that the waters

Around you have grown

And accept it that soon

You'll be drenched to the bone

And if your breath to you is worth saving

Then you better start swimming or you'll sink like a stone

For the times they are a-changing.”

And for final measure, let me remind you what else he warned the people who think Trump looks like a good idea:

What you can't understand

Your sons and your daughters

Are beyond your command

Your old road is rapidly aging

Cause the times they are a-changing.”

It’s pretty profound forever, and for Dylan-haters out there, who think he can’t sing, it was words like these that made him such a legend that respected people in Sweden and Norway thought he deserved a Nobel Prize.