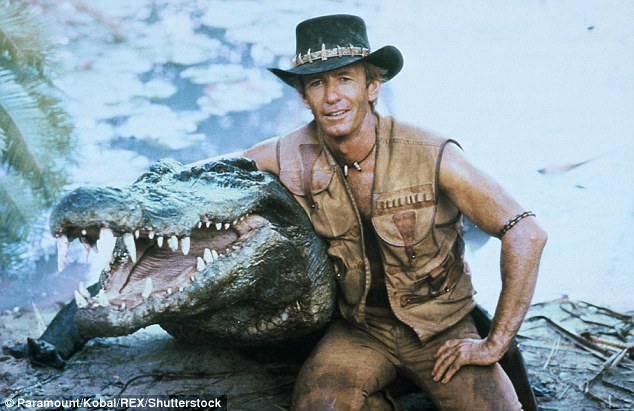 Bill's Budget reply is a Crocodile Dundee tax cut! But can the economy cop it?

Federal Opposition leader, Bill Shorten has gone the Crocodile Dundee line with his Budget reply, with his election pitch bound to be seen as him saying to the Treasurer: “That’s not a tax cut. This is a tax cut!”

Yep, in what looks like clever politics, Bill has offered 10 million workers not just a $530 tax cut like Scott, he’s bumped it up to $928, which will kick in July 2019, provided the country is calling Bill — Prime Minister Shorten.

Now before I assess how responsible or irresponsible this naked bigger bribe to voters is compared to Scott’s ‘cop this and vote for us’ Budget, let’s understand the details of Labor’s fiscal plan/election strategy.

Here are the main facts to absorb:

Of course, the big question surrounds Labor’s history of not being great with budgeting, like most Aussies. how will Labor pay for this bigger tax cut?

The answer is: two ways. First, to pay for his fistful of dollars promise, Bill pointed out last night, “we’re not giving $80 billion to multinationals and because we’ve made the tough decisions.”

Second, he’s taking away negative gearing for investor borrowers buying existing homes and he will halve the capital gains discount from 50% to 25%.

So what do I think about Bill’s alternative Budget?

Well, on one hand, I have to give it a tick because I argued both at the PwC post-Budget breakfast in Brisbane to over 2,000 attendees that Scott’s effort was a rare case where good politics was actually good economics. I often argue the opposite when pollies come ‘a-promising’. But with economic growth at 2.4% in the 12 months to December last year, we do need a shot-in-the-arm to get more growth, more jobs, higher wages, more tax collections and a lower budget deficit.

Bill’s bigger tax cuts would do that, so his sneaky politics of giving a bigger tax cut will produce more growth on a ‘tax cut to tax cut’ basis. It would have a bigger multiplier effect, as the cut is bigger and consumers have more to spend.

However, his incentives to business will be more scrooge-like, as he boasted: “We can pay down national debt, faster, because we’re not giving $80 billion to multinationals and because we’ve made the tough decisions.”

In March, Bill said Labor would go to the next election promising to scrap the legislation, which would reduce the company rate from 30% to 25% for businesses with a turnover over $50 million.

“Regardless of what legislation is passed this week, Labor will repeal this corporate tax giveaway of $65 billion to the biggest companies in Australia, the banks and the multinationals,” he said at the time during his National Press Club speech.

What’s interesting is where the $80 billion comes from because when Bill spoke in March, the numbers bandied around were less.

“The government’s entire tax package, which staggers the reduction in the corporate rate until it reaches 25 per cent, would cost the budget $65 billion in revenue,” New Daily reported. “The remaining tax cuts for the largest businesses – with a turnover above $50 million – are worth about $36 billion of that total $65 billion figure.”

We know company tax collections have boomed, so that might explain it. That will need testing going forward. However one significant piece of economics is missing from Bill’s story.

If you help consumers more and hurt business more, the positives from the bigger tax cuts can be partly offset by businesses investing less, which reduces potential economic growth.

Remember, I’ve given both Bill and Scott a tick for tax cuts to create growth and Bill got an extra for more tax cuts. However he loses it for not giving businesses incentives to invest, which company tax cuts do bring.

They also help the stock market and our super funds.

Bill also bags multinationals but they are really important to our economy. “According to IBIS World, around 37 per cent of Australia’s top 2000 companies were foreign owned in 2014-15. These foreign-owned firms had assets worth $1.1 trillion in Australia, revenue valued at $629.3 billion and employed close to 700,000 persons,” the Department of Foreign Affairs and Trade reported a few years ago.

An ANZ study recently showed that our great growth story was driven by population growth, while our productivity story has been a shocker.

This chart looks at GDP per capita or productivity and the blue line shows you that we have a problem. And that problem only gets solved by business investing in new equipment, IT and so on to make our workers more productive. That’s where company tax cuts can be useful and Bill is not into encouraging bigger businesses to do exactly that. 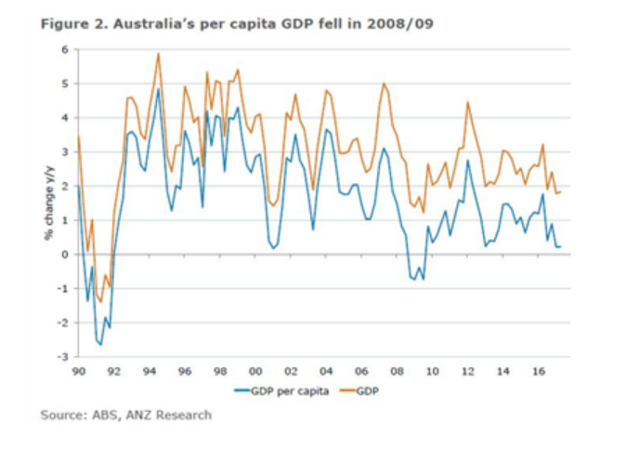 Interestingly, Bill once was a company tax cut supporter.

The ABC Fact Check tells us this: “When in government, senior members of the Labor Party including Bill Shorten made the same sorts of arguments that the current Government is making about company tax cuts: that they boost investment and job creation and make Australia competitive with other nations. Mr Shorten himself criticised a proposal from the Greens that would have seen the money for "big business" tax cuts diverted to health and welfare spending.”

And politicians wonder why we think they couldn’t lie straight in bed? At least, we know if Bill ever becomes PM, he’s very likely to change his view on company tax, especially if the economy is not growing fast enough to make his Budget promises affordable!