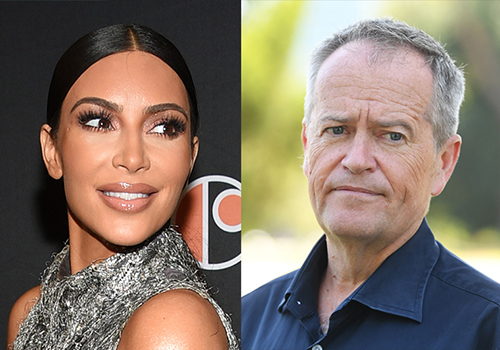 Bill Shorten, Kim Kardashian and what's wrong with this country!

My recent brush with my beloved country has convinced me that Bill Shorten and Kim Kardashian prove that there’s something that needs changing. And fast!

I really hate writing the next few words, but “what’s going on is what’s wrong with this country!” I can’t believe I actually was forced to write these words but my fellow Aussies have driven me to this conclusion.

Or maybe, and I hope this is wrong, I’m getting older!

By the way, I have no problem with age and one day the mob who rule what’s a fair call nowadays might start even defending those who seem to be discriminated on the basis of age.

I once did a speech with the legendary magistrate Barbara Holborow, who was then in a wheelchair traversing the Brisbane Airport and a staff member came up to help her and was shouting as he spoke.

She said to him: “Young man I’m not great on my feet but my hearing is perfectly good!” She turned to me and said: “There’s a certain age when people start shouting at older people!”

Herd mentality is a dangerous thing and the Internet and Twitter, along with all social media platforms, have made it easy for the herd to go stampeding without much thought. Scare a cow and they sure move irrationally but are we allowed to generalize about cows?

This whinge piece by yours truly follows some ‘hero’, who hides behind a nom-de-plume in the twittersphere called Lord Clyde of Hansard MEMBER OF THE CFW 9.

In true modern day silly labelling, he came up with this assessment of me: “That’s because you’re a true blue dink die conservative and no matter what Bill did you would still find fault with him and Labor. Just be honest and say Liberals all the way as that’s what shows through in every article you produce.” (I did tidy up a bit of the Lord’s untidy grammar and punctuation but I don’t want to be too discriminatory.)

This guy could not be a regular reader or he is so blinded by his one Labor eye that he can’t tolerate objective commentary. And that’s what’s wrong with this country.

There’s an element of truth in this generality and it does conform to what often happens to voters as they learn about life raising kids, buying homes, being stung by bad governments who change rules and tax rates and so on but I don’t agree with the sentiment.

As I’ve argued, the Hawke-Keating governments were critical to the 28 years of growth that Australia has experienced. Their reforms and deregulation, as well as initiatives such as compulsory super, show how valuable they were. Howard and Costello added to the positive changes but all four men made mistakes.

Keating allowed interest rates to go too high, when he ‘controlled’ the Reserve Bank. Costello made super and tax changes that were too generous but politics and short-term economic goals can often explain errors of judgement.

I was made a commentator when no one was  certain who Rupert Murdoch supported and Fairfax was a more middle of the road and slightly conservative mob.

Some commentators like Piers Akerman would always have the same slant and that was his bag. Philip Adams was always leaning to the left but I always tried to play with a straight bat on economic and political matters.

And that’s why I often had Penny Wong on my TV show and our working relationship started when I bagged  one of her policy decisions and she rang me up and debated my view.

Similarly, when Bill Shorten became Leader of the Opposition, he told me that when his wife asked what was I like, when we met in an airport club lounge, he said I told her: “He’s his own man.” Implying that I don’t run any party line but I do champion small business, fairness in wealth advice and fair as well as sensible policy decisions.

I think Bill’s negative gearing changes are excessive but if they’re introduced when house prices have stabilized, they could be OK. His tax rebate ban for retirees is too tough and he should put a cap on rebates, if he really needs to get money from retirees.

Shorten could become a good PM but he won’t become that if his supporters cheer every decision he makes. People like me have to stir, just like I did Malcolm Turnbull, who I’ve known since I was his patrol captain at North Bondi Surf Club but that didn’t stop me bagging him for poor communication, ineffectual leadership and a failure to play to his strengths.

It’s interesting that with an election coming up, if we put Bill Shorten in the story, the readership explodes. He’s become like Kim Kardashian but the response is tribal and irrational so we’re not getting anywhere, we’re just shouting at each other.

If he becomes PM, I hope Bill helps to change our infantile, immature tribal ways. If he does, he’ll get high praise from this ‘so-called’ dyed in the wool conservative. (How little those people who criticise me for this know me!)