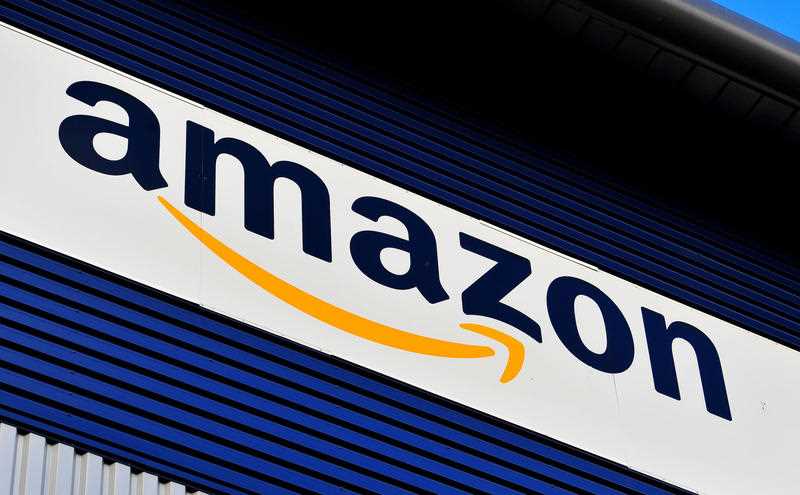 What are we, a bunch of shrinking hicks, petrified at the looming business-crusher called Amazon? Or are we just fascinated at Amazon’s growth as a huge, international former bookseller turned “sell everything” merchant, who’ll cut prices for consumers?

This week has been all about Amazon, as the media gives the company the greatest free kick, exposure-wise. It’s advertising they should be paying for but, once again, this ‘great’ business plays and wins!

Don’t get me wrong. Amazon is no threat to me and my business. Undoubtedly, it will deliver products from the usual books and CDs to their new age offerings of fridges, fresh food, baby products, jewellery, watches, garden products and more!

With their pending arrival, which could be a long way off before they actually have any real impact on rival retailers, the share market is seeing Amazon as Armageddon for great businesses such as JB Hi-Fi and Harvey Norman.

Back in February, around reporting time, JB Hi-Fi was around $29, after a good profit story. Now its share price is $24.46!

When I interviewed Gerry Harvey a few weeks after JB Hi-Fi, the legendary retailer said that he saw four ways Amazon could hurt his business but he has four counter-plans of attack/defence that would see him win.

And while I don’t easily doubt Gerry, a win could still mean less revenue, less workers employed, a lower wage bill, store closures and a new world for Gerry, his franchisees and his employees.

I admire Amazon’s founder, Jeff Bezos, as a business builder and disruptor. One texter to a Sydney radio station loved how his company would get even with the retailers who have been “gouging him and other poor consumers for years.”

I’ve often argued that the age of disruptors is a two-sided coin. One is lower prices, because this is how these businesses grow. Their price cuts give them free publicity as they threaten existing businesses. Eventually, however, it puts pressure on wages here.

But what gets me is that most of us are aghast when we hear of a country like China, with its cheap labour, dumping steel here at prices that would send our steel producers broke. There are actually laws stopping such dumping. But when the likes of Uber and Airbnb come to town, with lower prices (for now) and not following the costly official regulations imposed on businesses here, the only complaints are from the local rivals who get screwed.

We consumers think it’s great but these changes embed the seeds of change that a lot of us love as consumers but might regret as an employee, who eventually is forced to accept lower pay, less hours or no job!

The following charts tell the Amazon story of greatness and concern. Have a look: 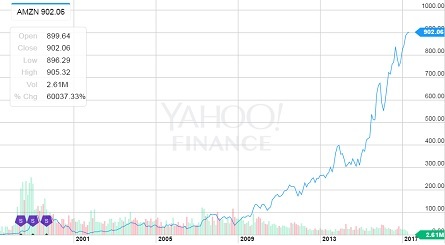 This is how the stock market has loved Amazon. 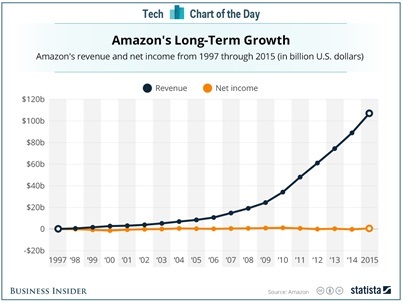 But the chart above shows you how they do it! It’s all about the revenue — artificially low prices and huge volumes — which is a definition of dumping.

One of the givens of capitalism is that entrepreneurs pay rent, wages and interest for resources, labour and capital. Their return is profit. Amazon has ruled out profit for crushing businesses and eating their lunch.

How are they able to do this? Because they can. Imagine the world if all businesses did the same?

Maybe this list of wages Amazon pays its staff might give us a glimpse of what could lie ahead:

Even adjusted for exchange rate differences, these are not Aussie pay rates. And I bet they don’t have the workplace conditions, holiday, maternal and paternal leave, etc. that we expect here in this country.

And let’s not even think about the taxes these big international companies don’t pay. This has a role in explaining a part of the budget deficit problems we face. In the past, Canberra was always able to pass laws to collect tax from businesses operating here. However, new age disruptors, who are domiciled in low tax countries and via tricky pricing practices, have avoided paying the taxes that patsies operating in home markets are forced to pay.

If Amazon made acceptable profits, I’d say “good on them for not being profiteers”. But their strategy is to kill businesses like Borders and, one day, end up as a virtual monopolist. And that’s when their pricing and profit policies will change.

According to the dictionary, an Amazon is “a member of a legendary race of female warriors believed by the ancient Greeks to exist in Scythia or elsewhere on the edge of the known world.” Certainly Amazon, the company, takes after its namesake.

This company has to play fairer before I become an uncritical fan.