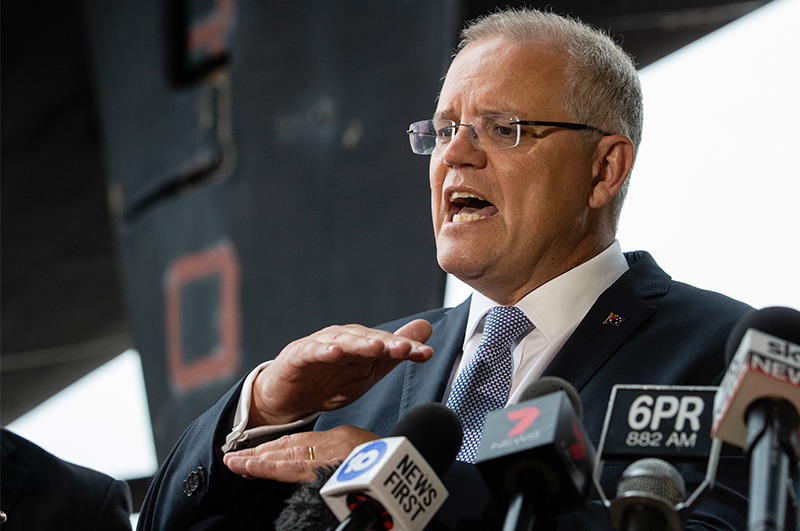 Listening to PM Scott Morrison accuse Labor of using phony economic terms such a “per capita recession”, I felt a tad guilty because I never taught him anything that covered a look at GDP per capita, implying a new definition of what a recession is.

To be balanced, I didn’t teach Labor MP Matt Thistlewaite anything on this subject either, because arguably the best economic faculties in the Southern Hemisphere simply never taught this stuff in the 1980s and 1990s.

That’s not to say that well-meaning economists with a more social inclination haven’t been coming up with better definitions of recession, and better measurements of economic improvement than real gross domestic product or GDP.

After some 12 years of teaching at UNSW and writing on economics in metropolitan newspapers such as The Sun-Herald and The Australian, I’ve read a lot of economics. And along with my TV programme, I’ve interviewed a lot of credible economists. And to person, they use the definition of a technical recession for working out if an economy is in a recession.

Changing the way you assess an economy and the success of a government in managing it along the way, looks awfully like changing the rules to suit yourself. As a kid, I had a mate who did that — came up with new and surprising rules and we copped it because he owned the football! We only got sick of him when he clobbered his younger brother, who quite accurately called him a rule-changing cheat!

Paul Keating never looked for a new definition of recession when we had the “recession we had to have”. But a few years ago, some economists wanted to discredit the Coalition by coming up with another new age personally preferred term, which some parts of the media seized, called an “income recession”.

These economists were arguing that while the real GDP measure looks good, the growth of nominal GDP or income was actually falling, so Australia was in recession!

On my TV show, I recall asking AMP Capital’s chief economist Dr. Shane Oliver what he thought of this DIY definition of recession. He said the idea has merit to look at but the definition of a technical recession (that is, two successive quarters of negative growth) remains the one used by economists and governments worldwide, so it’s the useful one for comparing performances of economies and governments.

This “income recession” definition is interesting because in the December quarter, while real GDP only increased by 0.2%, real gross national income rose by a big 1.1%, to be up 3.5% on the year. Meanwhile in nominal terms, GDP increased by 1.2% in the quarter and rose by 5.5% over the year, so using these as measuring sticks we’re in an “income boom”!

I’m yet to see any of the economists who both lamented and championed the greater truth of “income recessions” now hailing our “income boom”!

As someone who rejected the former, I can’t pick and choose and say “well done Scotty!”.

My truth, based on a real GDP assessment of the economy emanates out of what the RBA does with these numbers. The ABS adds the past four quarters of growth together, which says we’ve grown by 2.3% after being at 2.7% in the 12 months to September. I add the past two quarters together and then multiply that number by two.

We’ve gone from an economy that was rocking along at a near 4% pace in the first half of the year but we slowed down as if we’d been kneed below the belt!

What happened in the second half? As I pointed out yesterday, it was the Royal Commission’s revelations plus a new PM plus APRA’s loan restrictions started to bite plus house prices started to tumble plus Donald Trump heated up his trade war plus the Fed talked a tough game on interest rates for 2019 plus Germany nearly went into recession, as the EU slowed dramatically plus China’s growth faltered and the stock market in the US nearly lost 20%!

All this hurt local business and consumer confidence and the rest was slow growth history here and worldwide. So economists who thought rates were on hold until they rose in 2019 are now saying the RBA could cut this year!

Westpac’s Bill Evans thinks we’ll see two this year but the March real GDP numbers could decide the matter. The ABS releases those on May 1, before the Federal election. If the number is weak again and the RBA drops rates, the Government’s chances of winning on the strength of their economic record would sink like a stone.

By the way, the real GDP story seems at odds with the great labour market story.

Jobs growth has been remarkably strong, with unemployment at a seven and half-year low of 5%, where NSW has a 3.9% jobless rate. HSBC economist Paul Bloxham thinks the strength of the jobs market is telling the more truthful story about the Oz economy, compared to the real GDP growth or economic growth revelation. Of course, I can’t go there because that would make me as bad as those “recession per capita” types.

By the way, using a more conventional measure of Household Gross Disposable Income growth (which I used to teach), the number is 3%. Nine months ago, it was 1.6%!