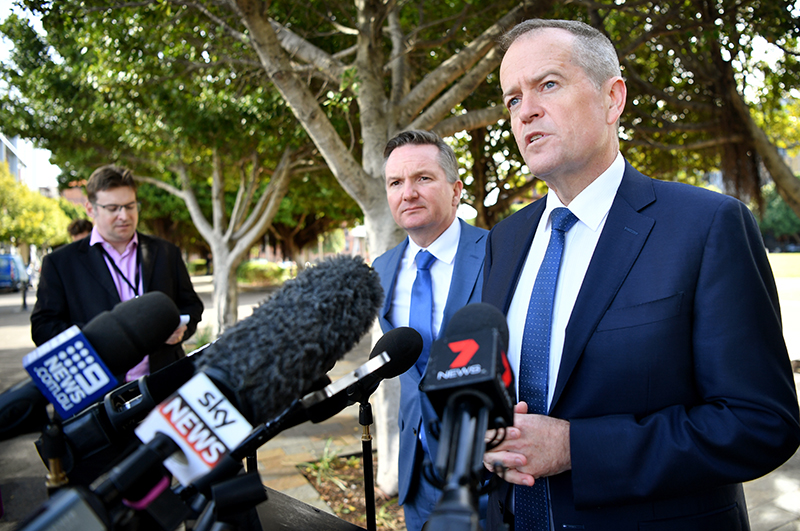 Be warned: Shorten, Bowen & Hayne could bring on a recession

I am worried about some aspects of the economy and while I rate them as manageable, the key issue is that these potential threats to my rosy outlook have to be managed!

Yesterday, right here in Switzer Daily, I wrote about how we have to be careful about our bank bashing post-Royal Commission. I said that we have to be sure that in punishing the banks, we don’t stop quality borrowers getting access to money to buy property, pricey assets and all the stuff that creates jobs, income and taxes that then are used to help those who are down on their luck in a pretty good economy.

However, it’s an economy facing a number of threats and most are linked to misguided politicians!

Internationally, the tariff battle between the USA’s and China’s top pollies — Donald Trump and Xi Jinping — could have a serious impact on our trade numbers, which, inevitably, feeds into economic growth and jobs.

You don’t have to be Shane Oliver to work out that a truce in this trade war would eliminate a threat that currently exists to our economy. But the threats aren’t all from overseas — we have some homegrown challenges.

My past two columns looked at the problems the housing sector is facing with APRA regulations on lenders, and the fallout from the Hayne Royal Commission resulting in good borrowers being treated like those poor souls who’ve tried to get plans passed by a local council! The process is pedantic, the request for information is endless and the eventual “yes” or “no” comes much, much later than expected. It’s a nightmare.

These dumb, inefficient councils hold up building works and slow down job creation but no one seems to care so we endure the frustration.

And now banks have been infected by what arse-covering public sector processes are famous (or infamous) for. While these government departments are only relatively important, in shovelling out money to keep the economy growing, banks are VERY important!

And this brings me to other politicians who could threaten the economy — Bill Shorten and Chris Bowen, who had what looked like good ideas to them when house prices in Sydney and Melbourne were surging and auctions clearance rates were 80% rather than the 50% they are today.

This was when investors and Chinese borrowers were stopping first home buyers and local up-scalers winning a house at auction but that was then, this is now.

House prices are falling in a measured way but if banks can’t lend more freely, they could exacerbate the housing decline.

One successful developer told me yesterday that he doesn’t fear getting funds from banks for his developments but he is worried his potential buyers are having difficulty getting loans!

The banks are getting out of self-managed super fund loans for property and this has taken another group of borrowers out of the market.

If Bill and Chris become the PM and Treasurer, they better rethink their policies to change negative gearing and halving the capital gains tax discount or they could have a real house price collapse on their hands.

Remember how Labor thought a mining tax was a good idea under PM Kevin Rudd? By the time they got it in place, the mining boom had de-boomed!

APRA plus Hayne plus the Bank’s new lending demands plus Labor plus the current house price slowdown could snowball into something serious, such that my developer mate was worried it could result in a recession!

And that’s where other politicians — Scott Morrison and Josh Frydenberg have to step up and start talking to banks and regulators to make sure this potential threat isn’t mismanaged.

Money must be made available to quality borrowers and bank punishment should not mean aspirational Australians have to be tortured because of the consequences of the Royal Commission.

Get on with the compensation for the 12,000 people who haven’t been able to vent but let’s not have an endless soapie to help Labor get elected.

Sure, Bill was right to fight for a Royal Commission but he had an insight into the crumby financial system and its bad processes because he was once the Minister overseeing the sector.

My reason for calling out our pollies and why I’m demanding they act to foster growth and jobs is because there are slowing signs that could be temporary — but you can never be totally confident when it comes to an economy.

• New car sales are down 5.5% over the year but that was off record highs.

• The apartments PCI sub-index fell from 36.7 in July to 32.8 in August – the lowest level in nearly six years. Activity in the apartment sector has contracted for six successive months.

• The national wholesale unleaded petrol price stands at 142.9 cents a litre today, up 0.6 cents over the week, at 4-year highs (highest since July 2014).

• Investor housing finance rose 0.1% in August, with annual growth remaining at a record low of 1.5%.

• Investment loans fell by 1.3% in July to near five-year lows.

• The Bureau of Statistics reports that Australian home prices fell by 0.7% in the June quarter to stand 0.6% lower over the year – the first annual decline since June quarter 2012.

• The Westpac/Melbourne Institute survey of consumer sentiment index fell by 3% to 100.5 in September – the lowest level in 10 months. The index is below its long-term average of 101.5. A reading above 100 denotes optimism but I’m hoping this was related to the change of leadership turmoil.

A couple of days ago I listed the good stuff on the economy and these really outweighed the negatives above but many of these concerns are linked to a weakening housing sector and it screams out to me that Bill and Chris have to ease up on their punishing property policies. And Scott and Josh have to make sure that our banks can do what they’re supposed to — and that’s lend.

Someone has to put an end to the frighteners frigging with our financial system and it’s going to take a leader who deserves to lead this country.