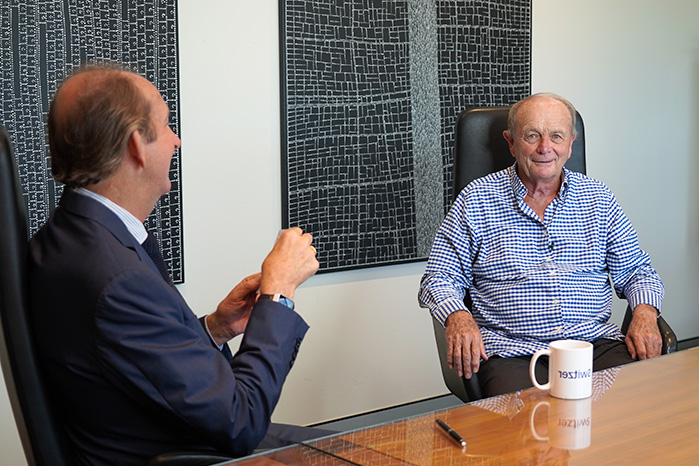 Despite the fact that shorts sellers think Gerry Harvey and his business, Harvey Norman, have “lost it”, which explains why 9.25% of the stock is shorted, he certainly surprised the experts in the market with his foreign-based stores bringing in 25% of his group’s profit!

“This has to make us the most successful retailer in Australian history to do so well overseas,” Gerry told me yesterday. And he’s right. He has become an exporter and believes this is only the start of something big overseas.

Gerry takes great delight threatening his short-selling enemies, promising that “ I will get you!”

He says this while throwing off his likeable old ‘bastard’ Harvey demeanour. And like a street-brawler, he warns that he’s coming after them.

Gerry has learnt to say that there are fair short sellers, who simply want to bet their knowledge of a listed stock’s business against the board, the CEO and CFO of a public company on the stock market. But he blows off steam (through his ears) when he talks about how he says his company is treated.

He blames hedge fund operators here linked to overseas funds and investment manipulators, who put stories in the foreign press, which are then reproduced by local journalists.

Gerry says if a local fund tried that stunt here, he’d be able to sue them and show that they’re spreading false tales to drive the share price down. If ASIC investigated the underhanded short selling that Gerry refers to, it should be looking for evidence of local bad behaviour of stock price manipulation.

If ASIC has actually investigated Gerry’s claims, either way (if he’s right or wrong), shareholders would like to know, as they have their hard-earned money with companies on these short sellers’ list.

Back to Gerry, and whether he has lost it, and the overseas story proves that he and particularly his wife Katie (who’s CEO, which a lot of media chooses to ignore at times) can still do retail successfully.

Harvey Norman has 89 company-owned stores in NZ, Singapore, Malaysia, Ireland, Northern Ireland, Slovenia and Croatia. And yes, I asked and he confirmed that all stores are called Harvey Norman overseas. I wonder what a Malaysian and a Croatian think of the name?

Anyway, what’s in a name, as 25% of HVN’s profit now comes from these overseas stores! No Aussie retailer has ever done this. Only five years ago, the figure was 7%, so that’s progress. Gerry says the new target is 50% of profit coming from overseas and if he kicks that goal, he will certainly get those pesky short sellers. And that’s the way he want to “do them”, by proving that he knows more about his business and retail than the snakes in suits (as he implies), who keep shorting his stock.

And in case you’re wondering, he is putting his money where his mouth is, owning 55% of the stocks in HVN, so only 45% is held by the public. When you think about it, if 9.25% of the stock is shorted, he’s got a big bet against him out there. That said, it didn’t stop him buying $80 million of his own stock when the December quarter stock market sell off played havoc with share prices. He said he couldn’t resist it when he saw the stock price below $3.

He also makes the point that the dividend yield on his stock is now 8.3% before the positive effect of franking credits. For retirees worried about Bill Shorten taking away their franking credits and tax refunds, Gerry is waving the sign that virtually says: “Look at me!”

Asked about Amazon’s effect with his company’s underlying profit of $209.7 million only flat, he dismisses them as hopeless retailers “who will never make a profit!”

On local sales, he concedes the housing slowdown for construction, sales and prices hasn’t helped a store like his, but he also pointed out that these current numbers compare to record high sales registered over the boom in Sydney and Melbourne for over five years, which started to peter out in 2018.

He doesn’t think there’s anything odd about our attitude to retail, so he must believe it’s mainly a cyclical issue of a slowing economy, where wage rises are pretty scarce.

One of the most memorable Gerry stories of the economics commentary phase of my life for The Australian newspaper was when Gerry told me that “Treasury sent some boys out to see me to work out how the economy is going.”

It made sense, given his sales, as he had to be a good indicator of the health of the consumer, who in turn is responsible for 60% of the growth of GDP.

The throwaway line that Gerry tossed at me yesterday was probably and potentially the biggest takeaway from my afternoon with him. In the middle of assessing how he thinks the economy will go, he actually said “The RBA will have to cut interest rates by half-a-percent…”

While he wasn’t prepared to bag the economy, he seems to be of the belief that rates will fall, which puts him at odds with the Reserve Bank Governor, Dr. Phil Lowe, who thinks a cut is 55:45. By the way, Westpac’s chief economist, Bill Evans, this week came up with the same prediction as Gerry!

Against that, yesterday we learnt that business plans for investment was up 11%, which was the strongest growth in seven years! This suggests the economy going forward might end up stronger than Gerry thinks.

I really hope Gerry’s right about sticking it to the short-sellers, but I hope he’s wrong on rates because, ironically, if he is, then the economy might improve enough for his local sales to rise along with his foreign sales, which might be the best way for him to slay his conniving enemies.

Either way, I’d love to hear that ASIC is investigating his claims of short-selling skulduggery because a lot of the investors I represent and share information with, would also like to know if ‘snakes in suits’ are putting the bite on their returns!