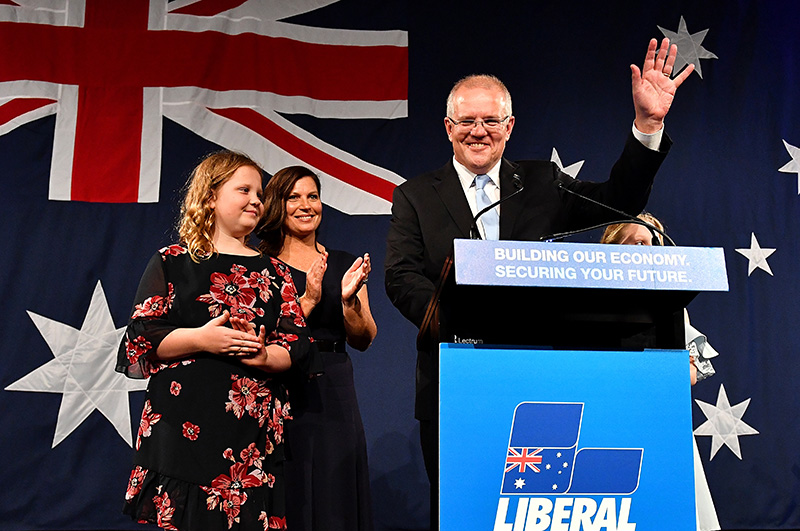 Aussies understand: it's the economy, stupid!

Over the past year, with the election a looming issue for business people and investors I talk to at conferences, I made the point that it looked likely that Bill Shorten would win the election and that his controversial policies (higher wages, negative gearing changes, the halving of the capital gains tax discount, changes to franking credits etc.) would challenge the economy and the stock market.

That said, you might recall I speculated that a short-term boom was on the cards as investors chased property and stocks ahead of the proposed negative gearing and capital gains tax discount changes starting on 1 January 2020. However, I warned another Bill shock promise — that nominated start date of 1 January — would not only create a short-term rush to buy stocks and investment properties, it would also create an investment cliff for assets prices to fall over!

Against this more likely scenario, I looked at Scott Morrison’s chances and the effects of his more limited and less controversial policies in concert with a picture of that great and lucky Olympic gold medal winning skater, Steven Bradbury. The audiences liked the idea of the hope of team Scomo defying the odds and being the last man standing when the election counting finishing line loomed. 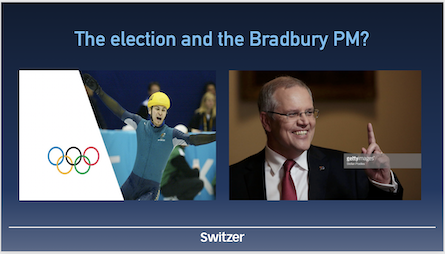 Purely as an economist, I’d argue that this was the best and less controversial outcome for the economy, jobs, stocks prices and the value of our property. And this latter issue that Labor’s property prices would ultimately take property investors out of the market and lower the prices of everyone’s real estate had to be a factor that worked to bring Bill down on Saturday night.

Three weeks ago, I interviewed Richo (Graham Richardson) for our Investor Strategy Day and asked him whether Scomo had a chance, given that Labor was threatening small businesses with wage rises, homeowners with lower house prices, self-funded retirees with bans on tax refunds and his perceived unsupportive stance to rural communities, who tend to be anti-Labor?

Richo agreed but said that the Coalition hadn’t effectively reached out to these groups. Well, over three weeks of him being on the campaign trail, the PM made a monkey out of Newspoll, Ipsos, Galaxy, the bookies and all the political analysts, including yours truly, who argued the best conservative voters could hope for was a hung Parliament, with Clive Palmer holding the ‘Trump’ card!

We did better than that!

• Campaign spending/promises by the Coalition, who promised to spend $13.869 billion over four years, which would add to growth and jobs.

• The less controversial Coalition promises are likely to lead to a rebound in business confidence.

• Stability of financial markets, post-election and the notion of stable leadership in Canberra should help consumer confidence.

• The negative spending effect by business and consumers that we talk about before an election should be reversed now the election is over.

• The First Home Loan Deposit Scheme, which will allow eligible first home buyers with an income of up to $125,000 (or $200,000 for a couple) to purchase a home with a deposit as low as 5%, will also help slow down house price falls.

• The stock market should take another leg up and if a Trump trade war truce happens soon, we could go even higher.

• Foreign investors could easily have exited after a Labor win and they might have already, so this election result will be good for those stock prices influenced by foreign investment.

• This would be good news for our super funds’ growth and balances.

• The end of anxiety for self-funded retirees that they could lose a fair chunk of the money they live on will be good for consumption and investing.

• The potential political harassment for banks by Labor should help bank share prices and these have a big influence over the stock market.

• And, of course, there are Budget-promised tax cuts coming, which should also add stimulus to an economy that has been faltering.

Both Labor and the Coalition’s policies would have added oomph to an economy growing at 2.3%. On that subject I think the growth number is lower. The six months to December produced only 0.5% growth and if you multiply that by two, that’s annualised growth of 1%!

I think things have improved but not by much, as the election threat, trade war concerns, slumping house prices and the fallout from the APRA bank crackdown, along with the Royal Commission, have crushed bank lending to borrowers.

And this is a huge issue for Scomo and his team to address ASAP. Bad borrowers shouldn’t get money but good ones should. At the moment, good risk borrowers are being treated very badly because banks have had the frighteners put on them.

A Labor supporter has to be crestfallen today but from an economist’s point of view, the economy got the best result on Saturday. If my analysis works out, job growth will continue and this will lead to better wages growth. And that could be the dividend for a lot of disappointed Labor voters.