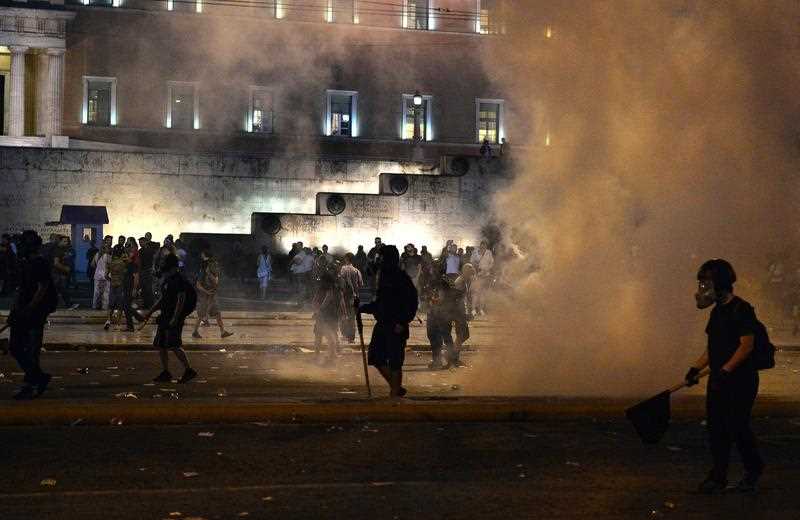 Athens is on fire and IMF is tipping petrol on it

While politicians in Athens debated and divided over the Eurozone debt deal with the Greek Prime Minister, Alexis Tsipras, under pressure from sections of his own party for supporting the tough austerity demands of the country’s lenders, violent protesters armed with petrol bombs took to the streets.

The PM’s deputy finance minister has even resigned but - in breaking news - the parliament has voted for the deal and the measures will be passed into law.

In Europe, before the deal was passed, stocks were cooling down marginally after heating up following the Greek PM accepting the debt deal, but they still ended up. The collective markets’ breath was held ahead of the decision which was expected by midnight Athens time. In the end, 229 MPs voted in favour of the measures, with only 64 against. Six abstained from voting.

Over on Wall Street the Dow Jones index was down, but not by much, with Athens under a close market watch. However, the Fed boss, Janet Yellen, was before the House Financial Services Committee and she confirmed that the US was on track for its first rate rise this year if the economy develops as the Fed expects.

She wanted inflation higher. She tipped unemployment to fall and she admitted both Greece and China were on the central bank’s watch list.

US economic data was better than yesterday’s retail figures with industrial production up 0.3%, the Fed’s Beige Book telling us that economic activity continues to expand and producer prices up 0.4%.  As we says nowadays: “All’s good” when in reality it’s mostly good but hell, who am I to argue with modern language?

What was perplexing overnight was the IMF and its negativity towards the 86 billion euro bailout. The lender of last resort to debt-stricken, failing countries released a report that says the European lenders — effectively the member countries of the EU — will need to give Greece a 30-year period of grace so it can service all of its debt!

And the body run by Christine Lagarde has hinted it could withdraw its promised 16.4 billion euros to the bailout unless a better debt relief plan is constructed.

I have to confess the more cynical side of my brain threw up the old “Euro-trash” insult but in the spirit of international co-operation I resisted giving into name-calling.

However, if this lot in Europe screw this up and send stocks down again, undermine Europe’s economic comeback and affect the global recovery negatively, then it will be name-calling season and I will lead the pack!

By the way, right now there is a good reason to believe our economy is getting stronger. Business confidence is at a 21-month high and business conditions, according to NAB, are at an eight-month high. Consumer confidence fell again and pessimists outweigh optimists but this Westpac reading was done as Greece and China’s stock market plunge dominated headlines.

This consumer sentiment reading is very volatile and so with the better than expected China GDP number out yesterday and the prospects of Greece being settled, consumers could soon go positive. However, they do not need any more negativity out of Europe.

There are negative economists who think we will see two more rate cuts. I really hope they are wrong but if they are right, a lot will have gone wrong internationally and stock market wise!

I don’t want to even think about that - and with the Greek deal getting up, hopefully I want have to!