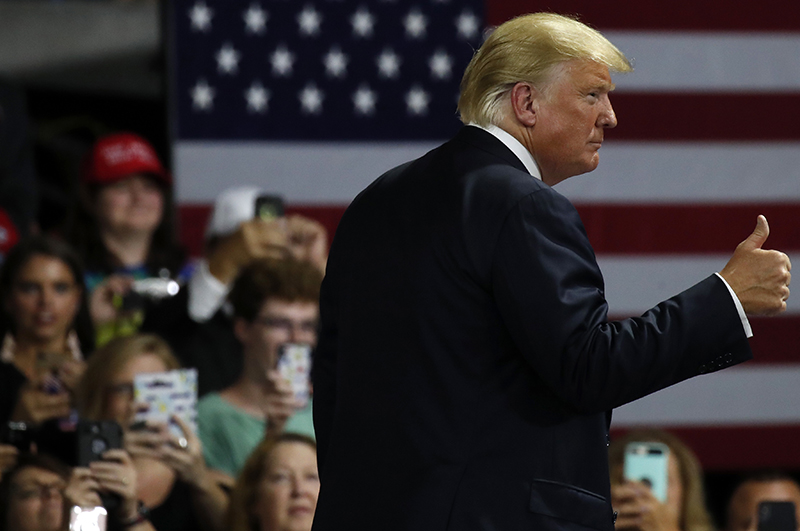 The doomsday merchants didn’t have a week that reinforced their negative view of the world and the man who could make or break optimism, global stock markets and the global economy i.e. Donald Trump seems to be playing a more accommodating game, just when we needed it most!

In case you’re suffering what I called PPS, or permanent pessimist syndrome, and you’ve missed this week’s positive developments, let me recap before I show one and all that I am actually a two-handed economist, who can use the words: “On the other hand…”

Donald has cracked a deal that should avoid another government shutdown in the US and Wall Street liked this “agreement in principle” deal. And while he had the cameras, DT told anyone who’d listen (just about all of us who care about stocks) that progress was good. It led www.marketwatch.com to run with the headline that “Trump considering extending trade deadline by 60 days if talks go well.”

A trade deal signed, sealed and delivered will be another leg up for stocks, though it won’t have the same oomph that came from the Fed’s Jerome Powell telling markets that “patience” would be shown with interest rate rises this year. This resulted in expectations of three rate rises shrinking to 1 or zero, depending on what expert you read, hear or see in the media.

The bottom line is that the stock market has started to work off the negativity that hurt stocks in the December quarter and there’s a good chance that 2019 could prove good for stocks.

The following would help an optimistic scenario materialize:

• Brexit doesn’t cause major problems — hoped for but who knows?

• Our economy follows the RBA’s 3% growth script — likely, if the above issues follow my “likely” script.

• The house price fall is that rather than a disastrous collapse. The RBA thinks the price falls and the slowing housing activity will be “manageable” and I think it’s likely!

Now let’s recap the week’s data and we’ll start with the good stuff:

• The Westpac/Melbourne Institute survey of consumer sentiment index rose by 4.3% to 103.8 points in February. The monthly increase was the largest in 33 months. A reading above 100 denotes optimism.

• The unemployment expectations index hit the lowest level in 7½ years, at 120 points in February and is down by 0.5% over the year to February.

• Melburnian consumers’ views on whether it was a good ‘time to buy a dwelling’ rose by 6.5% to a 5-year high of 125.1 points in February, which might help build a barrier to big price falls.

• According to data from the Australian Institute of Petroleum, the national average price of unleaded petrol fell by 3.3 cents to 127.4 cents a litre in the past week and CommSec says:

“Compared with the highs in October last year, Aussie families are saving on average $53 a month on filling the car with petrol – equivalent to a quarter per cent rate cut on a $350,000 mortgage!”

• The NAB business conditions index rose from a four-year low of +2.6 points to +6.6 points in January (long-term average +5.8 points).

• The NAB business confidence index rose from +2.7 points to +3.6 points in January but it is below the long-term average of 6 points, though still it was a move in the right direction.

• The average credit card balance recorded an increase of $4.44 (or 0.1%) to $3,264.56 in December but it was the smallest December increase in a decade. Credit cards are no longer a great guide to consumers’ interests in spending, as millennials are anti-credit cards and like the likes of Afterpay and Zip.

• Germany missed out going into recession by the skin of its teeth, with a zero growth quarter following a minus 0.2% quarter in September.

Now for the bads:

• The weekly ANZ-Roy Morgan consumer confidence rating fell 3.4% from two-month highs to 114.1. The index was higher than the longer term average of 113.1 points since 1990 but just below the average of 114.3 points held since 2014. However, the weekly reading of consumer confidence is too jumpy for me to get too excited about, unless I see six to eight weeks so I can see the trend.

• The number of loans (commitments) by home owners (owner-occupiers) fell by 6.1% in December to a near 6-year low. This was expected and is not looking disastrous.

• AMP and Telstra reported badly but at least AMP’s profit drop from $848 million last year to $28 million this, shows the Royal Commission has been effectual!

And to rub it into doomsday merchants, have a look at this chart of the S&P/ASX 200 index for the month: 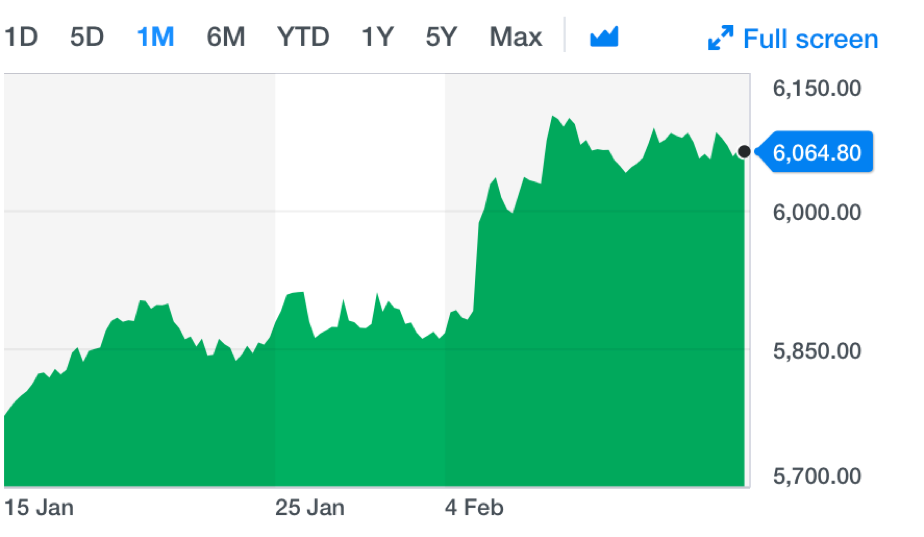 That’s a nice 4.8% rise in stocks over the past 30 days! And since the Fed told us it would be patient with rate rises in 2019 and the Royal Commission revealed all, we’re up 11%!

And gee I hope Donald and local data can add to the optimism and stock market gains.