Are you glass half full or half empty?

Watching someone I know do some heavy lifting to bolster his business and noting his business partner not giving him a lot of vocal and body language support, made me investigate the power of positive reinforcement. My inquiry was given added motivation because I personally have to think about what I say to my team at Switzer and my growing Switzer family.

I’ve said this before in this Weekend Switzer piece: I’ve always valued what John Symond from Aussie Home Loans once told me about his attitude to his customers, when he said: “People can forget what you say but they will never forget how you made them feel.”

Glass half-empty people can be valuable in order to check glass half-full types, who can let their oversupply of optimism get in the way of sound judgement calls. I’ve got people like this in my business and personal life and I value their contrarian views because they make me force objectivity on to myself. However, if they’re unnecessarily negative, I do hit them to the boundary!

There are many followers of mine who think I’m a perma-bull but in reality I’m a committed bull, who’s prepared to turn bearish or negative when the facts say I have to give up my positive ways.

There are many reasons why I go long positivity and willingly debate those doomsday merchants who spend most of their lives warning about recessions, stock market crashes, bankruptcies, divorces and the end of Prime Ministers!

Even on the bankruptcies front, the news is more positive than negative. According to the Government’s Australian Financial Security Authority, the statistics for the September quarter 2018 showed that the number of new personal insolvencies fell 9.7% from the September quarter 2017, from 8194 to 7400. When you think of the people out there with debt, having only 7,400 in trouble is unbelievably low!

On divorce, the numbers don’t look great, although we are actually getting better at the marriage game. Mccrindle.com tells us that “whilst one in three marriages end in divorce, they are lasting longer than two decades ago. In 1993, the average length of marriages that ended in divorce was 10.7 years, today they are lasting 12.1 years on average.”

Let’s face it, if one-third blow their marriage, two-thirds are making it work.

When it comes to the termination of Prime Ministers here in Australia, I can’t find a positive spin whatsoever, which says something!

When it comes to economics and the stock market, two charts show you why I know having a positive view totally trumps being nobbled by negativity. 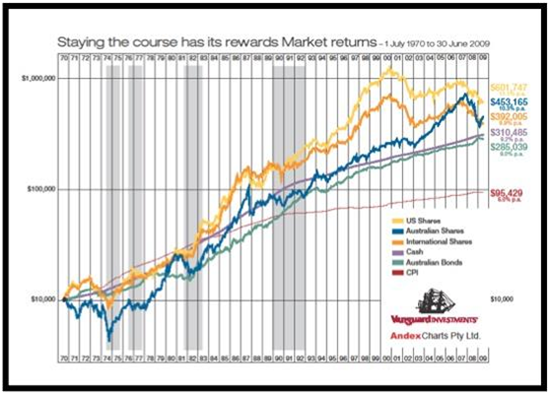 The blue line shows ups and downs and the big ones are market crashes but the upward or positive trend prevails. This should be a message to all of us that it pays to be positive and remain positive, even during the most negative of days!

This chart of the Aussie economy shows why being positive has paid dividends, with 28 years of growth without a recession. 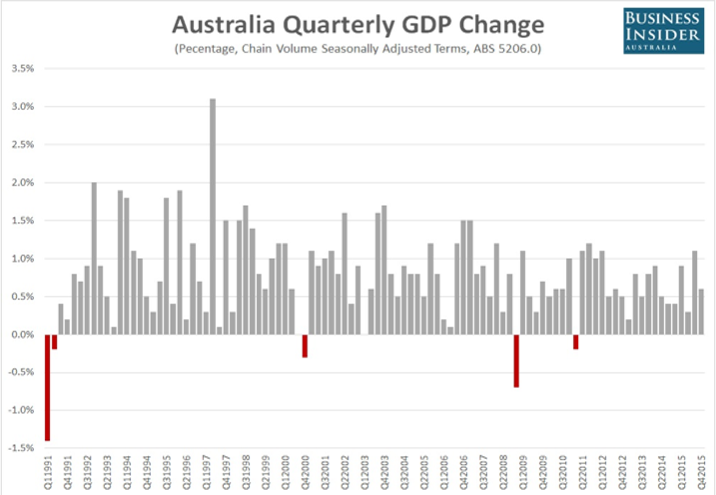 Those red bars are the only negative quarters over 28 years, which says there were five bad growth ones, compared to 107 good ones!

And if you want to look at the USA, Business Insider tells us that over the past 14 decades, the United States has been in recession 29.8% of the time but “fortunately the economic conditions have gradually improved over this timeframe:

Given all this, let’s look at the payoff of going long positive reinforcement.

Heather R. Huhman, president of Come Recommended, the PR solution for job search and HR tech companies, contributed this piece to entrepreneur.com. She pointed out that you can influence an employee or loved-one by two methods — positive and negative reinforcement.

“Leaders either warn employees about punishments, like public humiliation, or create the anticipation of pleasure by promising rewards, like a bonus,” she pointed out. But it raises the question which one has the best results?

The Harvard Business Review gave the positive approach the tick of approval, arguing that it motivates change better and is a plus for the employer-employee relationship.

The labour market studies suggest that job changers have been motivated by negative reinforcement in the workplace.

• Create momentum and be consistent.

Plenty of people would be surprised to see “momentum” mentioned as an important to positive reinforcement but it’s what makes employees and loved ones eventually complacent about how supportive their environment is. It creates a relaxed psyche that then makes it easy for someone to take risks and get outside their comfort zone, which are critical if you want to get the best out of someone.

“Momentum is the real key to success with any positive motivation program, and momentum is driven by consistency,” Manley Feinberg, the author of Reaching Your Next Summit explained. “Consistently recognise and reward the behaviors and results you want. Also, beware that when you accept, tolerate or otherwise allow behaviors you don’t want, you are rewarding those as well by continuing to employ and compensate the employee.”

How do you reinforce positive reinforcement, so it does not become ad hoc? “To encourage consistent positive reinforcement, define behaviours the organization values, create guidelines for employee success and share them with employees and leaders alike,” Huhman advises. “Then, host communications-training for all levels of management so every leader knows how to motivate employees when they fail. Think "big picture" and stay future-oriented.”

Interestingly, while financial incentives and public recognition are great, the expert literature comes out on the side of positive motivation as being more impactful, when employees understand the bigger picture and their role in it.

Regular communication is also a great reinforcer of a positive message, as is giving employees responsibilities.

On feedback, Huhman looks at the value of what she calls a "feedback fellowship," which is a group of employees who survey their colleagues to determine which types of reinforcement motivate them and which ones cause distress.

And if you are the kind of person who can’t boast about achievements, then it might be time to tackle that personal demon. Your team will benefit from the positive reinforcement. They need to know that they’re spending a large part of their life doing something with someone, who validates their efforts with good news revelations. “Not only does positive motivation produce great results,” said Kim Dawson from YouEarnedIt, “but when that positive motivation is shared across the business by everyone in a public way, it becomes amazing.”

How you communicate positive messages will depend on the culture you’ve created. Sometimes the nature of the industry you operate in could be very influential. That said, as the leader in your business or family, you should be the ultimate influence on how you inject your positivity and positive reinforcement into your followers lives.

Being negative about positivity could be the biggest mistake you could make!