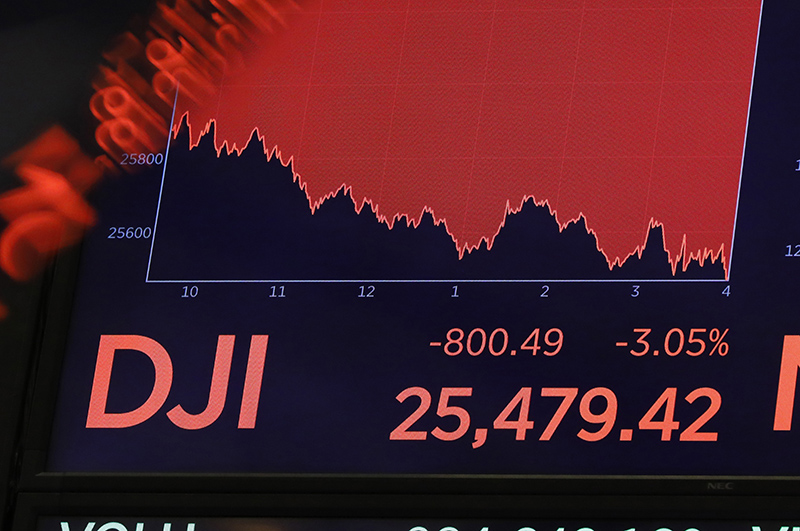 Are we heading for a global recession?

Another bad day at the office for Wall Street with the Dow Jones Index down over 800 points triggered by a world of economic and geopolitical problems that have forced the bond market to give out signals that a recession could be coming!

In trying to work out why there’s an accumulation of negative forces challenging economies worldwide, you have to ask why, especially with interest rates so low?

My answer goes like this: When there’s something strange in the economic neighbourhood, who ya gonna blame? The Trump-buster!

Sorry, I couldn’t resist that but Donald and his trade war (though understandable, given how unfair China has played trade for a long time), the timing of his tariffs and his worldwide bouncing of not only China but also Canada, Mexico, Germany, the EU generally and even the UK, has effectively busted global growth.

It’s even arguable that it hasn’t helped US growth. The US President would never blame himself for this economic slowdown that could roll into a recession. He’d rather blame the Federal Reserve boss, Jerome Powell. But given the economic growth that was prevailing in 2016 and 2017, those interest rate rises were seen by the market as justifiable.

And when Powell inferred that three more were coming in 2019, the market kind of said: “OK, we get that”, until the economic data started to slow down in the second half of last year.

So where did that slowdown come from? I’d say a lot of economists would put the trade war at the top of the list. Not far behind would be Brexit and so two political decisions to change the rules of engagement with the world have run before a worrying economic slowdown.

This chart below shows US economic growth. Note how it spurted on Donald Trump’s tax cuts. Also note how it has tailed off since the tariff (tax) hikes.

Even though there was a kick earlier this year, the trend is down since the 3.5% growth in the middle of 2018. And why wouldn’t it be, with the constant threat of tariffs bound to be spooking business leaders who have to make decisions to invest or not to invest?

The same challenging question would be faced by EU businesses that sell a lot of stuff to the UK and the USA. Chinese, Canadian and Mexican business investment decision-makers would be similarly challenged.

And at home, our business leaders have not only had Donald and his trade war but we had the Royal Commission, the impact on bank lending, the threat of Bill Shorten’s radical policies and the election itself to knock around business investment confidence.

A stock market is a window on the economy and the business sector and the Trump trade war, on top of the unexpected Brexit, has come back to bite the global economy. The question is: can we dodge this recession bullet?

This stock market window yesterday led to the following headlines:

• China’s economy continues to be weighed down by the tariff war with the United States.

• The US yield curve had become inverse - yields of 2-year bonds rose above US 10-year yields for the first time since 2007.

None of these wipe revelations hose down fears about recession. And it doesn’t help that reports say Chinese troops are assembling on the Hong Kong border. Meanwhile, Argentina is in an economic mess, with the US Franklin Templeton fund losing $US1.8 billion in one day on its investments in the country.

I can politically argue that the Trump-buster had a reason to take on China but I’m sure the ramifications economically have turned out to be more serious than he would have wanted. And that’s where the Chinese have a role to play.

There was supposed to be a trade deal in late March but the Chinese allegedly pushed back on Donald’s demands. If that deal had gone through, I’m sure I wouldn’t be talking about recession today!

I’ve learnt over the years that when you screw around with economies for social or political reasons, there are often unwanted economic consequences.

And that’s no myth that deserves to be busted. This chart of UK growth since Brexit reinforces my argument.

That bone-coloured box on the chart above is negative growth. I rest my case.