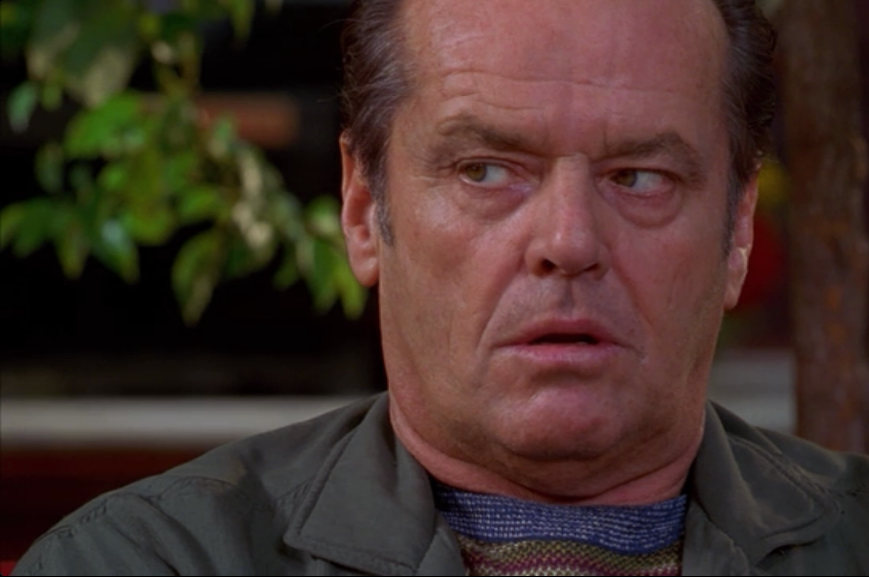 At the risk of looking like a movie tragic, I reckon Aussie consumers need a good talking to. I guess I’m saying that we need to talk about us consumers to find out why we’re so glum. Could we be ingrate, spoilt brats?

I think there’s a failure to recognise that while wage rises are low and slow, in areas such as property values, super returns, interest rates and the price of things such as overseas travel, clothing, etc. it’s close to As Good As It Gets.

In fact, I think we are spoilt brats. The failure to understand and appreciate how good our super is suggests to me that super has a Roger Dangerfield problem  — it gets no respect! And that’s bratty.

Right now, consumer confidence is at odds with business confidence, so we need to go looking for answers for why Aussie shopper sentiment is subdued.

There could be any number of reasons and I’ll list them but let’s put the consumer negativity into perspective.

On the Westpac measure, the June reading was at least up 0.4% but the actual number was 96.6. What does that mean? Well, if the reading was 100, then pessimists would equal optimists and so it really means that there are say 104 pessimists to 96 optimists. So it’s not as good as optimists outweighing pessimists but at least we have 96 optimists out of 200! But how bad is this number, historically speaking? This chart shows the recent story: 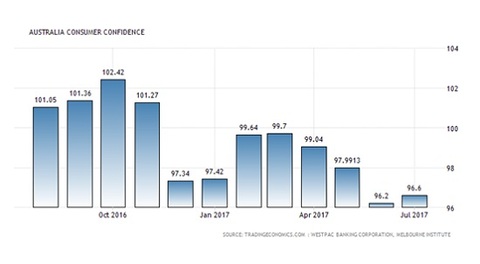 But the 10-year story is more instructive: Since the GFC, we’ve spent a long time around the 100-level and a lot of time under the 100-mark. The election win for Tony Abbott helped the 2013 spike but as his PM performance faltered, so did consumer confidence.

Meanwhile, the big spike 2009 to 2011 was linked to the stimulus program after the GFC, (which also coincided with us avoiding a recession). Remember those $900 cheques and the Julia Gillard Memorial school halls? At the start of the period, the Oz dollar was closer to 60 US cents but it did gradually rise into the 90 cents region by 2011.

Of course, at any one time, there are different reasons for some people being confident/positive and those feeling nervous/negative.

Reasons to be positive or negative range from our houses being more valuable (but if you don’t have one, you could be negative) to some people getting good wage rises while others don’t. Higher income people can forget about rising power bills but income strugglers can’t. Also, in Perth, where house prices have been falling, homeowners are going to be tending towards negativity, while Sydney and Melbourne homeowners should be literally laughing all the way to the bank!

That said, the stand out reasons for being positive make me think we have some spoilt brats who are building up the pessimists higher than they should in number terms.

Here’s the good stuff to be optimstic about:

“Super funds have delivered a positive return for the eighth consecutive financial year, with the median growth fund up 10.7% for 2016/17,” he pointed out.  Among the major funds, double digit returns were common.  Hostplus took the top spot with 13.2%, and even the worst performing fund in our growth category delivered a respectable 7.4%.”

I know there are reasons why people could be lacking in confidence and young people not being able to buy homes is an understandable reason for them being cheesed off. However many of these complainants don’t appreciate their super story.

I was talking to a young man of 37 years of age, who had about $200,000 in super. He’s has an aggressive approach to investing and could easily average 10% returns in super per year over a decade, even with two or three bad years with the market crashing.

On a 10% return, his money doubles every seven years

This is a staggering prospect for many young people, who have the wonderful advantage of compulsory super all their working life.

And what I liked about this guy’s response was that he said: “And that’s only on what I have now. I’ll have at least 30 years of more contributions on top of that!”

Now he should be a positive consumer and so should a lot of others out there, who I reckon are giving super the Dangerfield treatment!

That said, why am I a voice in the wilderness talking about this? Why isn’t someone in Canberra pedalling this story?

Maybe the Government’s problem is that they’re just not super salespeople?