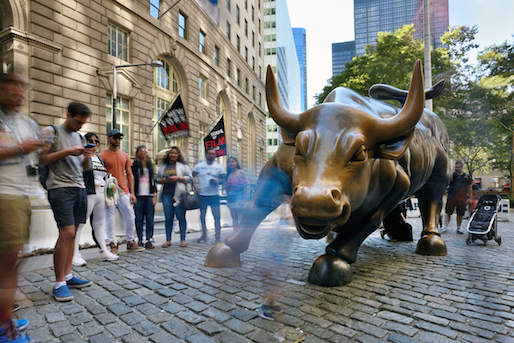 Another good day for Wall Street but can it last?

It’s another positive day on Wall Street but can positivity last? When I started tapping away on my laptop, the Dow was up over 400 points (or 1.7%) but can this rally last to the closing bell, only two hours away?

These are both hard questions, considering the volatility and the market’s huge negative reactions last week.

Remember last Tuesday the Dow was down around 600 points with less than a hour to go, and as I watched US business TV, the most quoted stock market index in the world slumped 1600 point in a few minutes!

To come close to answering these two tough questions, we have to recap what’s happened and then use these revelations to work out what might happen.

The trigger was great: employment and wage data that led to the bond market raising its inflation expectations and therefore its rate rise expectations.

When this happens, those numerical types who try to work out the future success of the companies that we invest in (they’re called analysts, fund managers, traders, etc.) rework their numbers and might say “we should downgrade the stock price potential of that company or companies”.

However, what we’ve lived through, while looking dramatic, should prove to be the correction that the Yanks had to have.

The Dow was up 30% in a year. There hadn’t been a 5% pullback in over 400 sessions and that was a record. A lot of us (people like me) kept reminding investors that a “healthy correction” was overdue and now we’ve had it.

And while I’m glad the US stock market has now added a positive Monday for stocks to a positive Friday last week, history says it could be premature to jump in and start buying on the belief that the worst of this is over.

Mind you, I think it is, but Wednesday in the US brings the latest Consumer Price Index reading and, given inflation is the new spook factor for stocks, this number could send stocks up or down.

If it’s bigger than expected, stocks could fall. If it’s lower than expected, we could be off to the races with stocks! The US shouldn’t get a big positive rebound — it will have to get great economic and company news stories before it can retrace its previous record levels but I do think over the next year or two, its stock markets will make new highs.

The charts showed the Dow was starting to fall after 26 January but it got serious after those great economic readings, with the January job report on 2 February.

Last night on my new Sky News Business program, Money Talks, I assembled three of Australia’s best fund and portfolio managers together to work out how scared we should be about all this and how worried they were.

I had John Murray from Perennial Value, Mary Manning from Ellerston Capital and Anton Tagliaferro from Investors Mutual share their thoughts on what just happened.

They agreed it was a healthy and overdue correction in the US. They didn’t confidently say the worst is over but they do see it as a buying opportunity.

Fear on stock markets means good companies get belted as investors, traders and others dash for the exits. This creates buying opportunities, provided you don’t think economic and market Armageddon is around the corner.

All three don’t see this and all three think the next recession in the US, which could create a crash of the stock market, won’t happen over the next two years.

Given the above, the second question on what will happen to positivity beyond today, the consensus is that stocks can go higher, at least for 2018 and my experts didn’t seem worried about 2019 as well but it will depend on how fast the US grows, helped by the Trump tax cuts and how quickly the Fed raises interest rates.

So betting positivity can last for at least a year or two looks like a sound bet.

But what about between now (6.30 am) and the closing bell at 8 am our time? Can the Dow remain positive?

Recall how last week the Dow dropped from 600 to 1600 in a matter of minutes, so can I be confident that this positivity will last 90 minutes?

I guess yes but there are some experts who are worried about hi-tech investment products that are linked to the VIX or “fear index”, as well as others connected to algorithmic trading that could be the basis of the next “Big Short”, as some negative types refer to the potential threat.

Some of these like to blame ETFs (exchange traded funds) for adding to the threat to market stability but that’s an unfair call. I’ve always railed against normal investors taking risks on exotic ETFs that are linked to derivatives and where the fund manager doesn’t actually buy the stocks that underlie the investment product.

They are risky and could threaten the market in the future but it’s wrong to brand all ETFs as market rockers in the future. Ray Dalio, one of the greatest fund managers of all time at Bridgewater & Associates, is long a number of ETFs.

And arguably, the greatest investor of all time, Warren Buffett, has regularly extolled the virtues of passive index funds, which the most famous ETFs are.

I repeat there are risky ETFs for investors and ultimately they could hit markets but when I asked my three fund managers about the threat of the VIX-linked products, they argued that the risks weren’t a major concern.

They’re all smart people and are famous for doing their homework, so I hope they’re on the money!