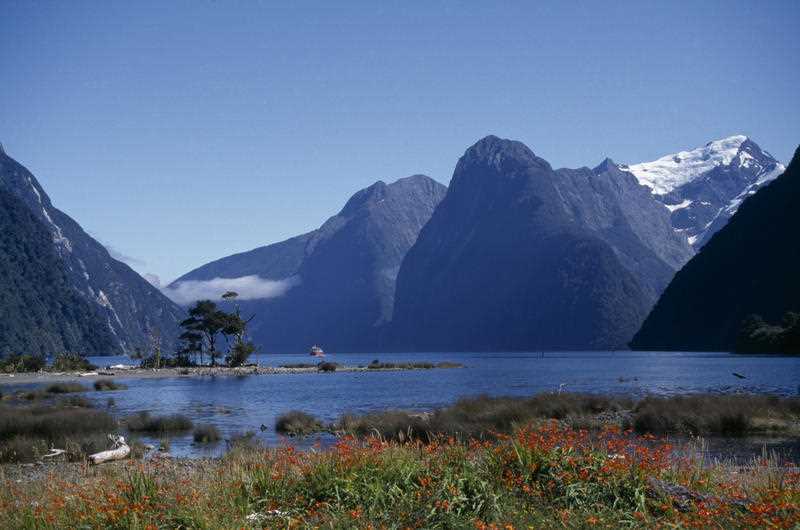 Andrew Bolt is dead wrong but he should take my correction

He might not like this (though I suspect he’s big enough to take a correction as his whole life is about correcting others), but Andrew Bolt was wrong when he corrected me on Tuesday night on our mutual mate’s 2GB radio program starring Steve Price.

Since the softening up period before last year’s Budget, Andrew Bolt — the most read columnist in Australia — has been worried about our deficit and debt problems. And while the PM and Treasurer have eased up on their Budget emergency concerns, Andrew certainly hasn’t.

This puts him at odds with most of the country’s respected economists, who see it as important but not more important than getting economic growth up. He’s so worried about it that he has been advocating “tough love” for the country’s retirees.

So if you believe the Government, we have already seen an improvement in our outlook for debt and, of course, less spending, better taxing and faster economic growth are the ways to beat our debt problem.

I listen to Bolt every night talking and debating with Steve and their listeners as I drive home after recording my Sky News Business program. On Monday nights I actually go to 2GB for The Super Show, which follows Andrew and Steve’s hour of power!

Now, one thing I know (and it has come from Andrew’s own mouth) is that he’s not strong on economics. Politics and climate change are his strong suits (classical music and tulips as well, in case you aren’t a regular) and I know I’d be in for a battle if I had to take him on in those areas, especially climate change!

Andrew was talking about people in expensive homes being asked to go off the pension and, if need be, they should sell their homes and run their funds down to save the Government having to pay them a pension.

Of course, these people would come back to the pension system if they spent their super funds, so it might only be a short-term gain.  Sure, that wouldn’t happen to someone with a $3 million home, which they were forced to sell by Andrew’s policy. However, someone with a $1 million home after a repurchase might only have $500,000 remaining in super and in fact, they’d get the part-pension straight away!

The question is: who would you make sell their property? What house value would be critical to the Government’s saving? (Note: the higher the home value, the fewer the people affected by Andrew’s tough love but the saving to Government is less. The lower the value, the more the Government would save but they’d lose more votes!)

The reaction to Andrew’s forced sale idea was huge and people who usually agree with him (2GB has a conservative audience) really took issue with him. Sure, a few acolytes stood firm with AB but the general reaction was: “I worked hard, I love my house, I paid it off, I borrowed a lot and went through 18% interest rates, I was not a wasteful spender and you now want to penalize me?”

As I said on Steve’s show, given the political problems of terrorizing retirees (especially hardworking ones who did scrimp and save to buy and create a lovely home), this potential change of rule was confronting. And anyway, the potential debt and deficit benefit wasn’t really big enough to really help the debt problem.

As a former academic economist, and as spending cuts are politically damaging to most governments and especially a conservative one, I argue that if you’re going to offend voters, do it for a lot of tax revenue and a broader GST (on everything and set at 15%) would be the best way to go.

Sure it too would be a hard sell but, as accounting firm PwC’s Tom Seymour showed recently, it would raise $50 billion a year and you could compensate the bottom 40% of Australians with $8 billion and the Government would end up with $42 billion a year! As Crocodile Dundee would observe: “Now this is a knife!”

OK you’d have to do a deal with the States to share the proceeds but you could also cut down other payments to the States. However, we all know that all solutions to our debt challenges are going to be politically hard.

Andrew got me cranky when he said my option raised taxes and his didn’t. That was a typical politician’s response to being put on the spot. While the overall tax take increases, a better GST means tax cuts are possible. Australia is often criticized now for relying on too high taxes on income and company tax rates because our GST is too narrow and too low.

Under my option, you give money back to people and they can choose to be taxed when they decide to spend.

Lower income tax rates are more visible, can lead to greater consumer confidence and give entrepreneurs more incentive to invest, make stuff and create jobs. All this helps the Budget bottom line.

We know the Kiwis have a 15% GST on everything and always have. An ex-pat Kiwi rang 2GB when Andrew was pooh-poohing my GST idea to say it was simple, you forget about the 15% and that their top tax rate was lower. Andrew cheered that but doesn’t understand that it’s the 15% GST that funds those lower tax rates. 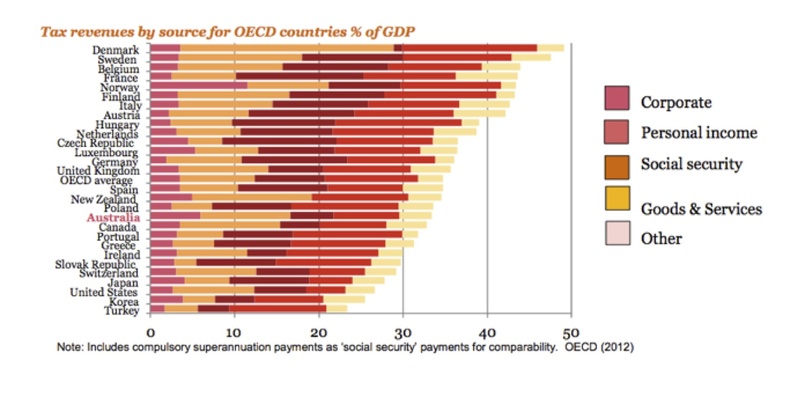 This chart shows how we compare to other countries and says we get too much from income and company taxes and too little from the GST.

Ken Henry said we needed a better GST and the upcoming Tax White Paper from the Australian National University (ANU) tax group (that includes Dr. John Hewson) is set to point to the value of a GST to help fix our debt and deficit problems.

John knows how hard it is to sell but so is making a pensioner sell their house, taxing well-off retired super savers, investors using negative gearing and so on.

By the way, when you offend a pensioner with a valuable house, you scare their family and friends and frighten others, who dream of owning a nice home in retirement. I think it could be harder to sell than a higher, broader GST. Worse still, this house selling idea doesn’t help the Budget bottom line by much to justify the political pain.

But here’s the clincher for a GST — New Zealand’s top tax rate is 33% while ours is around 47% (if you throw in the Medicare levy). But wait there’s more, there’s:

As you can see, a GST can solve a lot of problems!

One final mistake of Andrew’s — he called me Tom Switzer! Tom is a political commentator with right-wing leanings so it’s understandable that Andrew could make such a mistake, which Steve corrected him on! It shows Andrew needs to watch less ABC and Sky News (where Tom hangs out) and spend more time on the Sky Business channel.

If he did, his economics would definitely improve!

(By the way, Wall Street was up strongly on good Greek debt news, so stocks should do well here today!)