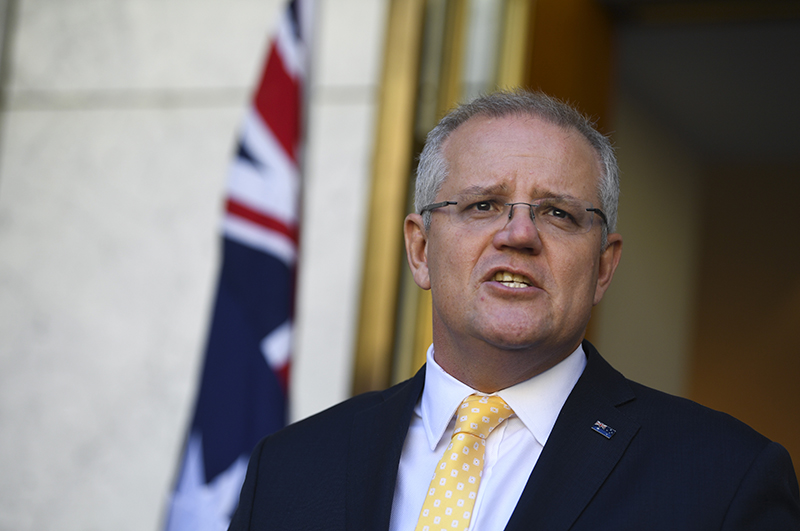 Alan Jones tagged ScoMo an economic no hoper. Let's test that out.

I was intrigued when I heard my 2GB colleague Alan Jones criticize the economic performance of Scott Morrison, ahead of the vital party room vote on Friday. I have to say I am biased as I taught Economics to the new PM when I was at the UNSW.

Alan and I were once schoolteachers, so let me remark on Scott’s ‘exams’.

Alan especially focused on the growth of debt under Scott, so let’s test that out. Here’s a chart showing the growth of Government Debt to GDP, which is the best test:

ScoMo became Treasurer in September 2015, so at least six months of 2016’s debt increase was on the back of Joe Hockey’s last Budget, delivered in May 2015. And you can see the debt increase from 2016 to 2017 was only 2.1%, while the jump between 2015 and 2016 was 5.5%. In fact, the jump in debt over the Tony Abbott period was 16.2% but, to be fair, both Governments faced hostile Senates that foiled Budget goals to lower the deficit and debt. Also, Abbott and Hockey faced a slower economy.

One of the great pay-offs of Turnbull’s jobs and growth goals was that it increased GDP and tax collections, which lowered the Debt to GDP ratio.

Alan gave Scott an F (fail) on debt, while I give him a C (or credit).

Of course, the Budget Deficit is a feeder to debt, so let’s see how Scott did in the fiscal responsibility department. CommSec’s senior economist, Ryan Felsman, looked at the latest take on our Budget position and this is what he found: “In the twelve months to May 2018, the Budget deficit stood at $12.8 billion (less than 0.7 per cent of GDP), up from $12.1 billion in the year to April – the smallest rolling annual deficit for nine years.”

He went on: “Australia’s fiscal situation continues to improve. Late last year, the government’s finance boffins mapped out where the budget should be each month in order to hit the target of a $23.6 billion deficit for the full 2017/18 year. At May 2018, the profile deficit was expected to be $15.8 billion. The actual result was $10.02 billion, a 37 per cent improvement.”

I might be a softie but on the strength of Ryan’s work, ScoMo has to get a D (or distinction) on that effort. Some fiscal experts say that we could see a Budget Surplus next year, which would be a huge effort.

Recently, the Reserve Bank, Governor Dr Philip Lowe, appeared before the House of Representatives Standing Committee on Economics and this is how he viewed the current Budget performance: “It’s good news that the Budget is on a sustainable track. Australia has gone a long time without having a recession. One day we will have one… when that day comes it will be useful if the government has the financial capacity to help stimulate the economy. So the job just isn’t left to monetary policy.”

By the way, once again, this improvement has been helped by faster economic growth. Through the year to the first quarter, the economy grew by 3.1%, following a 2.4% expansion in the prior quarter and above expectations of 2.8% growth. It was the fastest annual growth rate since the second quarter of 2016.

I think ScoMo gets a C (or credit) on his growth showing.

Let’s turn to the confidence he’s engendered while holding down the nation’s number one bean counter position. What this five-year chart shows is that there’s a huge spike in 2013, when Tony Abbott became PM. But progressively it fell. Under Turnbull and Scott, it went on an uptrend and largely remained at the high levels first seen when Abbott was PM.

Also in April, the NAB business conditions reading hit a level never seen before, which has to be a huge feather in the cap for ScoMo.

This effort has to be bordering on a D (or distinction).

What about the long-cautious consumer since the GFC and his/her confidence?

You can see a huge spike when Tony Abbott became PM but confidence faded. It then rose under Turnbull/ScoMo but faded until September last year, when another uptrend kicked in. Anything over 100 means optimists outnumber pessimists and the recent readings look promising.

I think Scott gets a high P (or pass) bordering on a C (or credit) for this confidence.

What about the job market under ScoMo? Well, a picture paints a thousand words, so look at this chart for unemployment.

Given Scott got the gig in 2015, this is a picture he’d be pretty proud of. Give him a Distinction!

By the way, in the year to January, a record 427,100 jobs were generated and that was on ScoMo’s watch. And in July, ANZ job advertisements were near seven-year highs and were up by 7.3% on a year ago. Meanwhile, the NAB employment index reached record highs recently in 12-month moving average terms.

I could go on about a lot of things that show that the economy did well under ScoMo but that’s not to say he and the Turnbull Government could have done better. That said, both the Turnbull and Abbott Governments had a troublesome Senate in the way of progress, while the handling of energy prices hasn’t been anything to crow about.

However, while Scott’s overall effort as Treasurer doesn’t put him in the Peter Costello class, he was heading in the right direction. I reckon he nearly deserves a Distinction for his effort, which is one grade up from the Credit I gave him in the 1980s at university!