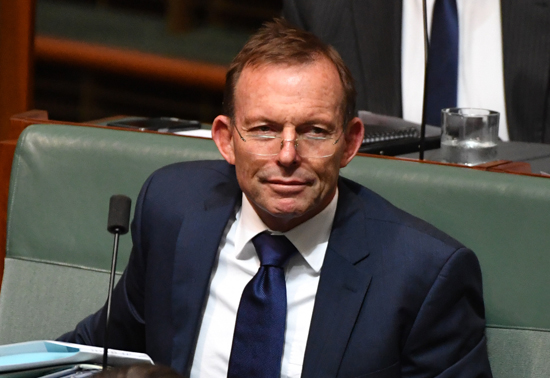 Abbott can't save the Libs or the economy! So who can?

I like Tony Abbott, but the ‘new and improved’ Tony won’t rescue the Libs in Government and Malcolm Turnbull, who’s also a good guy, doesn’t look like he can pull off the double play either!

In fact, the now full re-creation of the Abbott-Turnbull leadership battle, following Tony’s Brisbane speech this week, doesn’t augur well for the Government, let alone the economy. However, it really does make Bill Shorten’s path to the Lodge at the next election more certain.

Let me be upfront on Bill. He’s another good guy, but I don’t think he is the leader this economy needs either. That said, with the current disunity with the Coalition, despite Bill’s somewhat anti-business policies, his unity with his party is an economic plus.

I’ve shown on countless occasions that before Malcolm became PM, both consumer and business confidence were dropping like Wallabies off All Black wingers!

Consumer confidence is still pretty weak with the Westpac/Melbourne Institute survey of consumer sentiment falling by 1.8% in June to a 14-month low of 96.2. A reading below 100 denotes pessimism.

Business confidence is around four-year highs but has eased back a tad recently. This is the NAB’s take on their survey of the business sector:

“The business sector is looking quite upbeat, maintaining the apparent disconnect with a rather melancholy household sector,” said Alan Oster, NAB’s Chief economist. “It is good to see that the strength has been quite broad-based, and even at the state level we have seen some significant improvements in Western Australia, which signals that the worst of the mining sector drag is probably behind us”.

But let’s look at what Tony wants to dangle in front of us, and see if it will be good for the economy that lacks demand, enthusiastic consumers who want to spend and businesses that are mad keen to invest large amounts of money because they believe in our rosy economic outlook.

This is what Tony wants for us:

Tony invoked the image of the Lib’s last valuable leader John Howard, quoting him saying: “As John Howard recently observed, while compromise is necessary in politics, conviction is the foundation of success”.

Tony is a conviction pollie but he’s running with an agenda, which is like the bizarro-world of the Greens (which is a mythical world where the opposites prevail).

Sure, he’s articulating a more right-wing version of his last manifesto but it’s the kind of marketing message that maybe will excite 10% of Australia, which is like the numbers that love The Greens and Pauline Hanson.

If Tony splits the right with this pitch (as he’s now doing), Labor plus the Greens and those lefty Liberals who have doubts about climate change as well as climate change deniers could easily make it a saloon passage for Bill Shorten, PM, by 2019!

Tony might be running an agenda that sounds like what my old mate Alan Jones on 2GB and Sky News would sign up for, but Tony can’t sell or connect with his potential audience like Alan.

Watching him when he was PM repeating points for so-called effect was embarrassingly bad. In fact, what we saw publicly was never the guy many of us know can communicate very effectively on a one-to-one basis.

Malcolm is not cutting it in the connection caper and that’s why the polls are against him. He too can engage on a one-to-one basis but his public connection/communication is uninspiring.

And that’s the issue. We need an inspirational leader to nullify the splinter/narrow interest groups who have crept into parliament, rendering it useless and a threat to our economic future.

I don't think Tony can re-invent himself and I’m doubting if Malcolm can change enough to get us all inspired and ready to sign up to a man with a vision.

This leaves Bill in the box seat, ready to reinstate penalty rates, raise taxes on business, change negative gearing and the capital gains tax to give disincentives to property investors and so on.

These might be nice, leftish policies, which won’t hurt the economy much, but they won’t be great stimulants for businesses to invest, for employers to create jobs, for the economy to grow faster to reduce the Budget Deficit.

It won’t be Malcolm’s ‘Labor Lite’ but full on Labor.

Somehow we need an inspirational leader — be it from the Coalition or Labor — who can inspire business, consumers and foreign investors to take this already great country into the great economy class.

And it ain’t going to be achieved by plonkers!