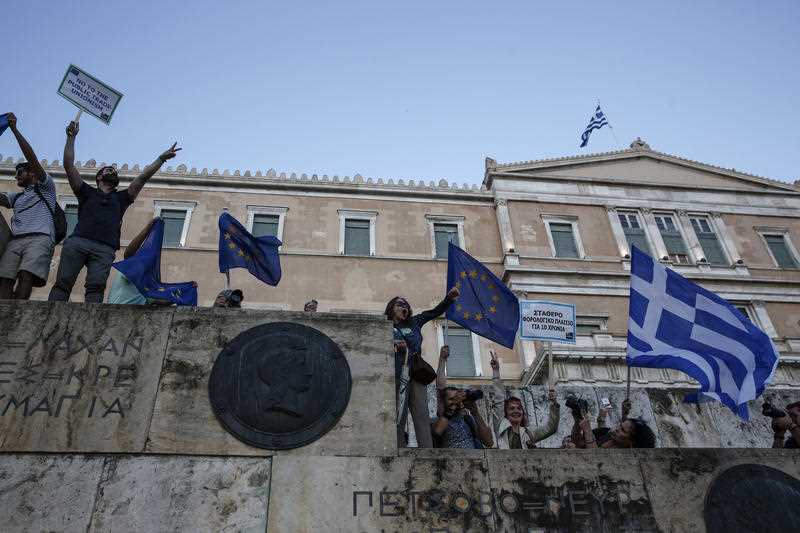 The Greek debt dilemma has parallels with many of the problems with our own Government on big issues such as the GST, the overtime/penalties issue and even getting our economy on the road to a real economic recovery, without the savior that has become mining.

To be blunt, many of us have a bit of a Greek problem that holds us back from greater success.

Like a lot of people, businesses and governments, “Greece has put the onus on its creditors to prevent it being forced out of the single currency, warning that an economic collapse on a par with the Great Depression of the 1930s had left it broke and unable to pay its debts.” (The Guardian)

We’re all excuse makers and politicians are some of the worst. The Greeks have ignored their problems for decades — tax dodging is a national sport, they have 13-month pensions, they give the islands VAT exemptions, productivity runs second to what people want, public servants can get 14-month maternity leave, their lack of competitiveness means they don’t have enough exports — the story goes on.

Worst of all, they refuse to accept objective criticism and to think differently. They like the way things are and, as a tourist, I love the simple island life and many of their old-fashioned ways but they have to be able to pay for it or else you end up with a debt of 320 billion euros.

Have a look at the growing problem graphically:

We’re talking 175% of GDP and while the protests in Athens today call for an end to austerity, which I agree with, opposing forces need to argue for the start of reality!

Why? Well, the Government in Athens has now told us that, wait for it, they have run out of money and would not be able to stump up the €1.6 billion due at the end of the month.

They, a national government, are akin to a reckless teenager who has run mad at nightclubs on a credit card or a small business owner who has ignored a failing business until it’s too late.

Adults need to take charge in Greece because the left-wing Syriza Party is so captured by its left-wing agenda and electoral promises (which were political and not economic) that it now will take a risk on a default, the drachma and what the global financial system thinks of this crazy gamble.

Of course, the Greeks aren’t the only ones to have politicians who have not got the maturity, the leadership and the honesty to tell their people what they need to swallow to fix up their economic problems and to make sure the future is in no way like that of Greece’s today.

In the US, they can’t be realistic about taxes on the wealthy, which objectively are charitable. In Australia, both Tony Abbott and Bill Shorten won’t try to talk us into a 15% GST on all goods and services, like the Kiwis, because their political longevity is more important than really beating our potential debt problem.

PwC has shown about $50 billion could be raised by accepting the above GST changes. This could provide compensating tax cuts for the bottom 40% of Aussie income earners. That leaves $42 billion that could add to state receipts, but a big portion could be for debt repayment and crucial infrastructure spending needed for future economic growth.

I’d like to not be talking about a 15% GST but in the absence of a mining boom, and because I’m looking at the economic scoreboard that shows we’re looking more like the debtor countries of the world, rather than the one that Labor inherited from John Howard in 2007, it tells me I have to say what a lot of my readers don’t want to read.

Thank God I’m not a politician.

All countries need gifted leaders who can talk to a country and bring its voting population along for the ride. Bob Hawke and John Howard could do it and their Treasurers — Paul Keating and Peter Costello — doled out the responsible, tough medicine we needed.

What did we see? Try 23 years of continuous economic growth and a time when we killed our Federal Government debt and looked like the greatest economy in the world when the GFC hit, with our banks in top 10 safest in the world!

We didn’t just get lucky. Courageous politicians, no, leaders had a hand in it and risked being tossed out of government to do it.

Countries such as Greece, to a major extent, and Australia to a minor extent really could do with some exceptional politicians/ leaders who have the wisdom and the paternal (or maybe it’s maternal) care to make voters embrace the real world.

A Caton correction: The exceptional economist at BT, Chris Caton, tweeted me to point out that when I compared Greece’s primary deficit to Australia’s overall deficit, I made an error. A primary deficit purely looks at revenue versus spending and excludes interest repayments. When these interest repayments are added to Greece’s primary deficit, there’s no comparison. Good point, Chris. I’m glad the calibre of my readers ensures that we get it right here at switzer.com.au but I will plead “I wrote this on the island of Lemnos and Greece can over-relax you!”

One final Good News Daily fact: While Greece is spooking some stock markets, the Fed’s communiqué on future rate rises has resulted in the Dow up over 180 points at the close. Have to love those optimistic Yanks!