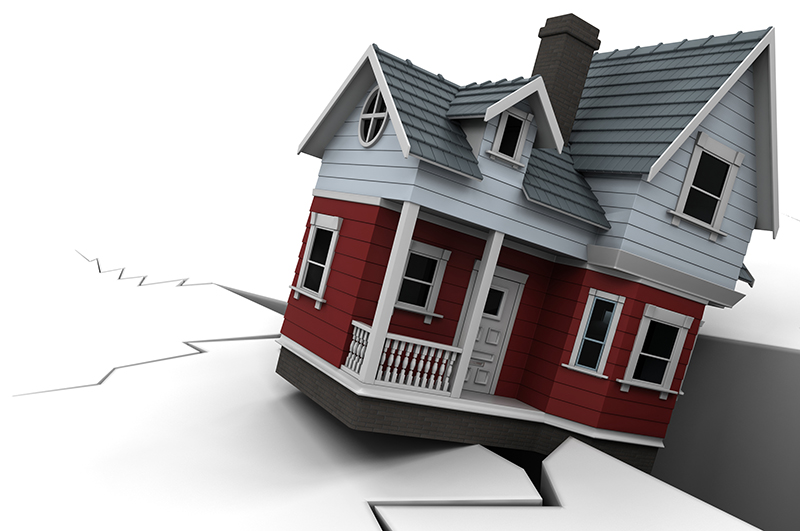 After reading the debt-hating Professor Steve Keen’s reasons why Australia could see a 40% fall in prices, I did feel a little de-vibed. Steve is a smart guy and did predict a financial crunch before the GFC. And I was one of the few who kept warning that not all economists were on board with the “she’ll be right” view on the global economy. That said, I didn’t see the “clear and present danger” being relevant in late 2007, when the GFC crash happened.

I’ll return to that later but right now I’d like to share other economist’s views on Steve’s column published on this website on Tuesday. If you missed it, you can read it here.

Here’s what CommSec’s Craig James came up with after reading Steve’s piece.

“Steve has forgotten textbook economics as well as accounting,” he noted. “You need to look at both sides of the balance sheet — assets as well as liabilities.

“And income as well as payments, such as debt payments or affordability.”

James stated that housing supply and demand can’t be left out of the equation as well, with the lack of supply and huge immigration intakes possibly providing a floor that might stop house prices plumbing the depths of a 40% decline.

“As both the RBA and the IMF indicate, there is no oversupply, affordability to make debt repayments remains strong and net worth or wealth is at record highs.

“Also, the good news is that government debt is low and the budget is near balance.”

Clearly, James is looking at what conditions exist here that might explain why we could miss out on doing a rerun of what happened in the USA, Spain and Ireland. In all three cases, there was a home-building boom of huge proportions. And in Spain’s and Ireland’s cases, I bet there wasn’t an immigration intake of our relative proportions. I suspect the Yanks always have a big intake, given its border down Mexico way!

Here was Sarah Hunter’s considered view on Steve’s scary scenario. Sarah is the Chief Australian Economist at BIS Oxford Economics, based in Sydney.

“It’s an interesting piece, and Steve makes a number of valid points,” Sarah noted, which she lists below:

“I don’t agree with the implication of his conclusion though, that a 40% downward correction in prices is likely (yes, it could happen but I see it as an extreme tail-end risk),” Sarah affirmed and then goes on to list her reasons for this:

“In short,” Sarah concluded, “I see a number of differences between Australia now and the US in 2007 on the eve of the GFC, and this is why I don’t think we’ll see a scenario like that materialise. It is a tail-end risk though.”

AMP Capital’s Shane Oliver was time short to look at Steve’s piece and write but he directed me to a recent piece he produced covering his views on a likely crash.

“For some time, we have been expecting top to bottom falls in Sydney and Melbourne prices of 15% spread out to 2020, implying price declines around 5% per annum,” he wrote. “However, the risks are starting to skew to the downside – particularly around tighter credit and falling capital growth expectations made worse by fears of a change in tax arrangements. Auction clearances in recent weeks have been running around levels roughly consistent with 7-8% pa price declines. (See next chart.) 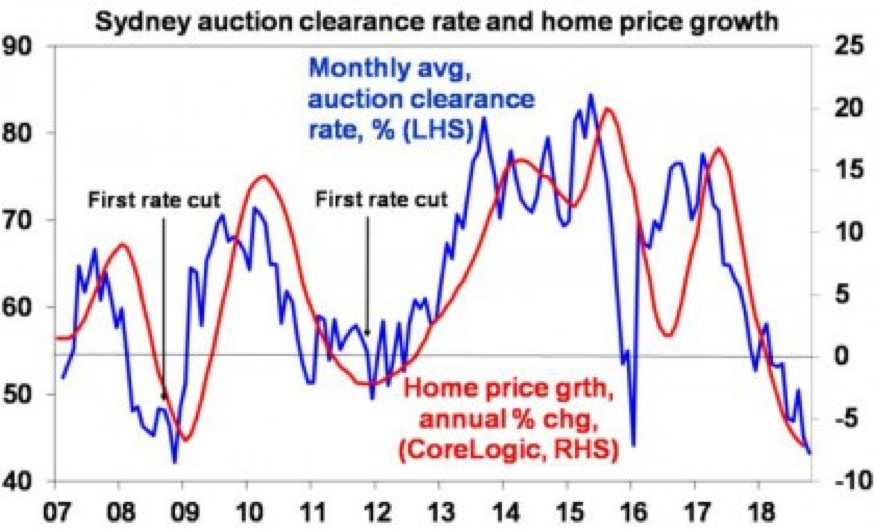 As such we are now allowing for a 20% decline in prices in these cities, again spread out to 2020, which would take average prices back to first half 2015 levels.” 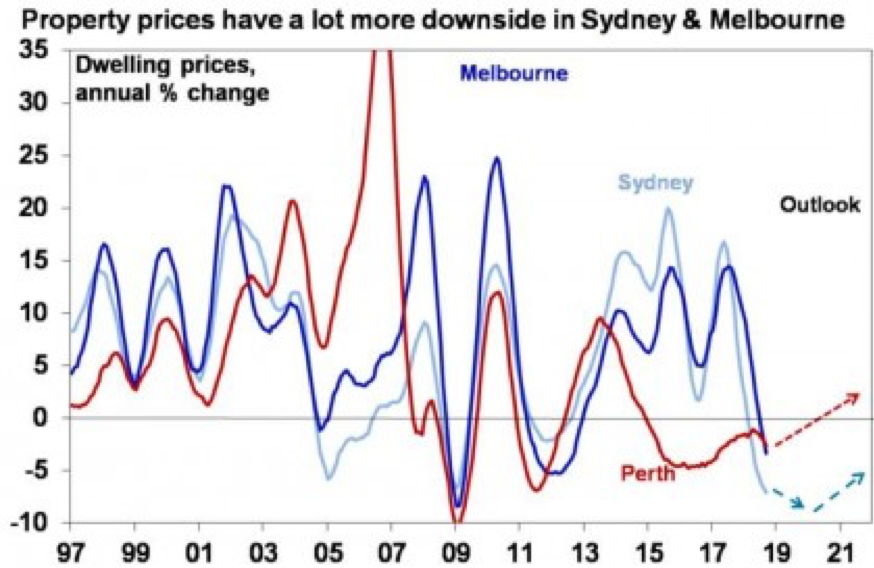 “By contrast, home prices in Perth and Darwin are either at or close to the bottom having fallen back to levels seen more than a decade ago, and prices are likely to perform a lot better in Adelaide, Brisbane, Canberra and Hobart along with regional centres as they have not seen anything like the boom in Sydney and Melbourne,” he explained. “But they will see some impact from tighter credit. Overall, we now expect national average prices to fall nearly 10% out to 2020 which is a downgrade from our previous expectation for a 5% national average fall.”

“With prices now falling naturally the calls for a property crash are getting a lot of airing but these have been wheeled out endlessly over the last 15 years or so,” he reminded us. “Our assessment remains that a crash (say a 20% or more fall in national average prices) is unlikely, unless we see much higher interest rates or unemployment (neither of which are expected) or a continuation of recent high construction for several years (which is unlikely as approvals are falling) and a collapse in immigration.”

But wait there’s more of Shane’s view to consider.

“Strong population growth is continuing to drive strong underlying demand for housing. While mortgage stress is a risk, it tends to be overstated: there has been a sharp reduction in interest only loans already; debt servicing payments as a share of income have actually fallen slightly over the last decade; a significant number of households are ahead on their repayments; and banks’ non-performing loans remain low. Finally, while Sydney and Melbourne are at risk other cities have not seen the same boom and so are less vulnerable.

“However, the risk of a crash cannot be ignored, given the danger that banks may overreact and become too tight and that investors decide to exit in the face of falling returns, low yields and possible changes to negative gearing and capital gains tax,” Shane concluded.

One last point I’d make is that the GFC was triggered by a surprise revelation that debt ratings agencies had not been rating collateral debt obligations properly. This undermined confidence in all financial institutions right around the world. In 2008, term deposits here spiked close to 7%. This would have been a worldwide phenomenon, which helped spark the house price collapses in many countries, as banks started calling in dodgy loans.

I concede there are huge debt levels around the world but growth has been strong and it might be argued that the conditions for banks not to trust each other and to effectively stop lending to each other is still a risk but is a lower order risk compared to 2008.

Only time will tell.