The likely outcome of this election means the Governmentâ€™s key budget proposals, such as the super package, are still up in the air.

Will the Government ditch the super changes?

It is almost certain that we won’t have a change of Prime Minister, with the Government holding at least 74 seats in the House of Representatives and possibly even finishing with a tiny majority. Where that leaves some of the Government’s key budget proposals, such as the superannuation package, is still very much up in the air.

Because changes to superannuation require amendments to the legislation, with the Government only holding at best case a wafer-thin majority in the lower house, and having to deal with a populist Senate, it is almost certain that the package in its current form would not get through. One option would be to junk it in its entirety.

This would come at a cost. Apart from the political rhetoric about a “backflip”, it also comes at a cost to the Budget - about $5.4bn over the forward estimates and $2.0bn in 2017/18. The table below lists the 11 measures - the first five come at a cost for the taxpayer, the last six generate the revenue. 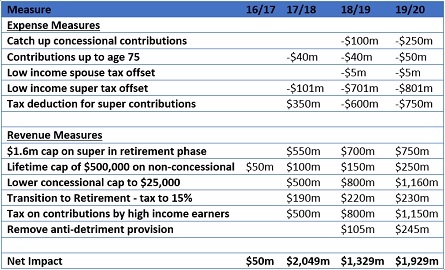 A more likely scenario is to make changes that are capable of attracting bi-partisan support. One aspect that the Government will weigh up keenly in framing any changes is the feedback from its backbench, party members and campaign committee as to the impact of the package at last week’s election. There has been an enormous amount of anecdotal feedback that some Coalition supporters boycotted the party, didn’t offer donations and refused to man the polling booths in protest.

However contrary to some predictions, the package doesn’t seem to have cost the Coalition any votes. The following table shows a selection of blue-ribbon Liberal seats in Sydney, Melbourne, Brisbane and Perth. These are seats where you would expect to see a higher number of persons impacted by changes such as the $1.6m cap on transferring super balances to the pension phase, or the $500,000 lifetime limit on non-concessional contributions. The data compares the change in the primary vote and two-party preferred vote to the 2013 election result, and the national average across all seats. 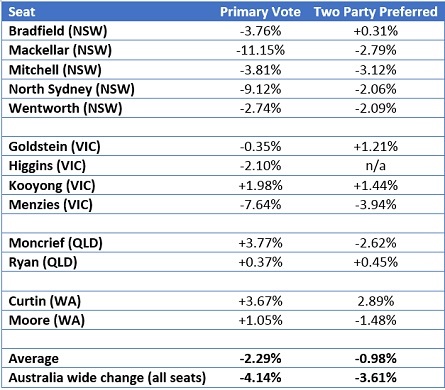 Prima facie, it is very hard to conclude that there has been any negative electoral impact from the package. On a two-party preferred basis, the Government is only down by an average of 0.98% across these 13 seats, compared to a national swing of 3.61%. Looking at primary votes only, where you might expect to see the effect of voter protest, the vote in these 13 seats is down by 2.29% compared to a national average of 4.14% for the Liberal Party. And in NSW, where it is down by 6.12%, this compares to a statewide decline for the Liberal Party of 5.05%.

The story in the Senate is similar. Parties that were strongly opposed to the changes don’t seem to have benefitted materially. In NSW, for example, David Leyonhjelm’s Liberal Democrats vote has collapsed to 2.67%, while the Christian Democratic Party is registering just 2.73%.

What changes are likely?

When the dust simmers, the Government will need to make some changes. While it will probably offer a couple of carrots to appease the backbench, the cold hard voting analysis will point to making changes that the ALP can support and which don’t have too much impact on the budget bottom line. During the election campaign, the ALP said that it was “banking” all the savings, so their support should be largely forthcoming. It is, after all, a package that has Treasury’s fingerprints all over it.

For the ALP to provide support, most of the expense measures (the first five changes in the table above) will stay. One that might be scaled back is the change that would allow anyone up to age 75 to claim an income tax deduction for a personal super contribution, irrespective of their employment circumstances. This change would benefit individuals who are partially self-employed, or those with employers who don’t offer salary sacrifice. As it has gotten so little traction and publicity, and the Government will need to pay for the other changes, the obvious answer is to junk it.

Of the revenue measures, the change that has irked the most people is the $500,000 lifetime cap on non-concessional contributions and a starting date of 1 July 2007 for measurement purposes. Some view the start date as retrospective, so there will be pressure to move this either to Budget night, or 30 June 2016. A more significant change will be to increase the cap from $500,000 to potentially $750,000 - and this is where the pressure will really come. Fortunately, it won’t cost the Government too much on the forward estimates. Over 10 years, it is a different story - but this is another three elections away!

The taxation of investment earnings on assets supporting the payment of a transition to retirement pension is likely to stay (both parties see this as largely a tax minimisation strategy), while it is possible that there could be some movement on the $1.6m cap on the transfer of balances to the pension phase. The argument that $1.6m is just not enough hasn’t been well supported, so the change, if any, might be just to grandfather the application of the cap. This will nullify any suggestion that it is retrospective.

Unfortunately, the change that should be made, that is to reverse the lowering of the concessional cap to just $25,000, probably won’t happen. This would cost the Government $2.46bn over the forward estimates, and unless it is going to junk all the expense measures, it just can’t afford it.