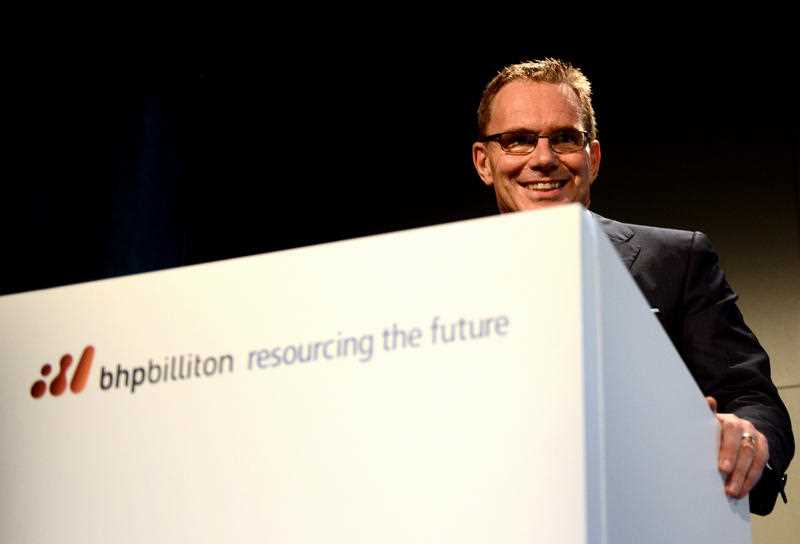 It is hard not to be but impressed with BHP’s interim result – and it is no surprise that the market has given it the thumbs up. BHP’s share price is up 4.3% since its release on Tuesday.

These were the headlines:

Looking at the reduction in underlying EBIT of US$3.0 billion, BHP says that a $5.9 billion negative variance from uncontrollable factors, such as price and the exchange rate, was offset by a positive variance from controllable factors of $2.7 billion. In other words, actions by BHP management to increase production, improve productivity and reduce costs added $2.7 billion of value. 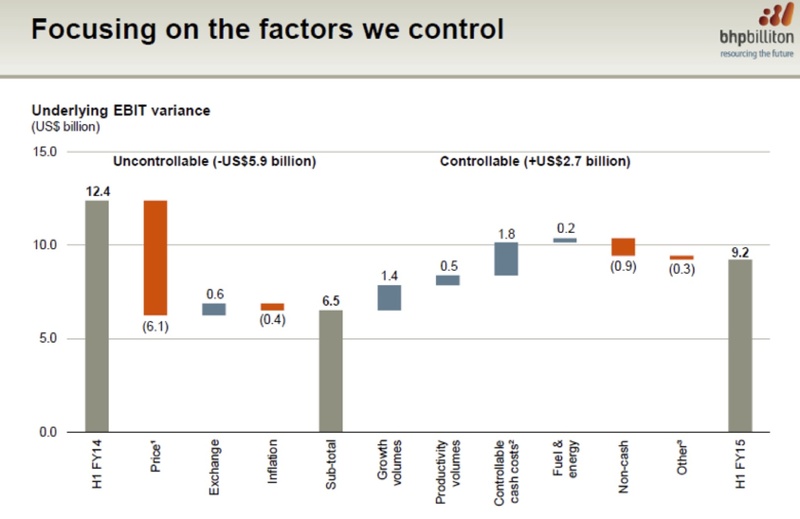 The other key take from the results was the confidence about the dividend payment. This statement was made: “we remain committed to at least maintain or steadily increase our base dividend in every reporting period”. 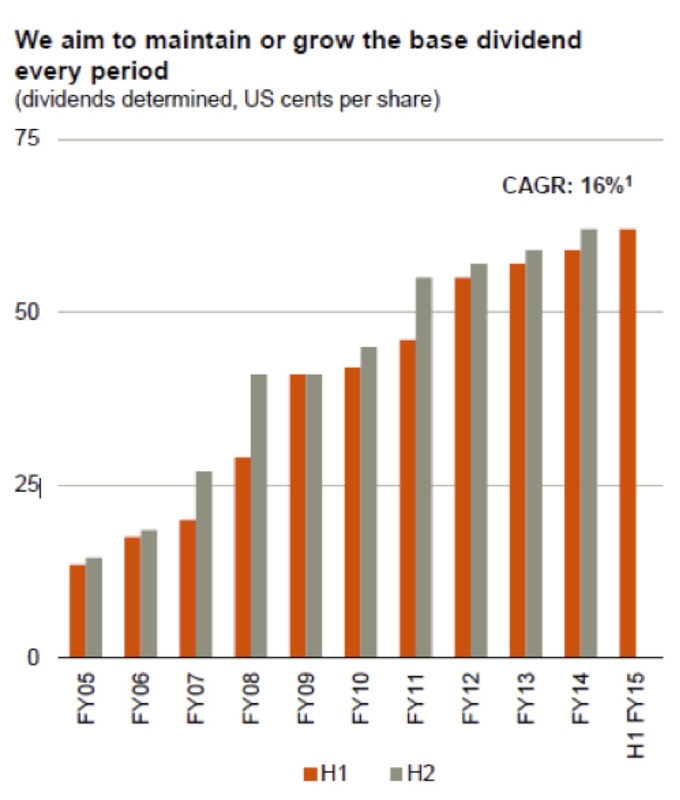 With BHP set to pay a US 62 cent interim dividend, and “certain” to pay a final dividend of at least another US 62 cents, at an exchange rate of Australian dollar/ US dollar of 0.78 cents and using last night’s closing price of $33.50, BHP is yielding 4.75%, fully franked. This is Commonwealth Bank territory – in fact, BHP is yielding marginally higher!

Further, BHP is priced at a lower multiple of forecast earnings (15.7 compared with 16.3 for the CBA). BHP also said that their commitment to maintain or grow the dividend every period was post the demerger of South32. That is, they do not plan to rebase the dividend, which implies a higher payout.

BHP is the new dividend stock!

It is not all caviar and champagne at BHP however, so let’s look at a couple of key challenges.

Fortescue chief executive officer Nev Power took a swipe at BHP and RIO the other day when he said “the lower iron ore price is not benefitting anybody”. They, together with Brazilian giant Vale, stand accused of increasing production of iron ore with the partial intent of driving out high cost producers, most particularly in China, and in doing so, crashing the price.

In January in Switzer Daily in ‘Does anyone at BHP understand game theory?’, I argued that BHP and RIO should rethink this approach. In any event, they should at least come clean with shareholders as to why the insatiable thirst to dig up more ore still makes sense.

BHP has partly responded to the call that I and many analysts and shareholders have made. They cite three main reasons to keep production moving – and growing!

Firstly, they say that the lower prices are starting to curtail high-cost production in China, and have produced the following chart to support this. 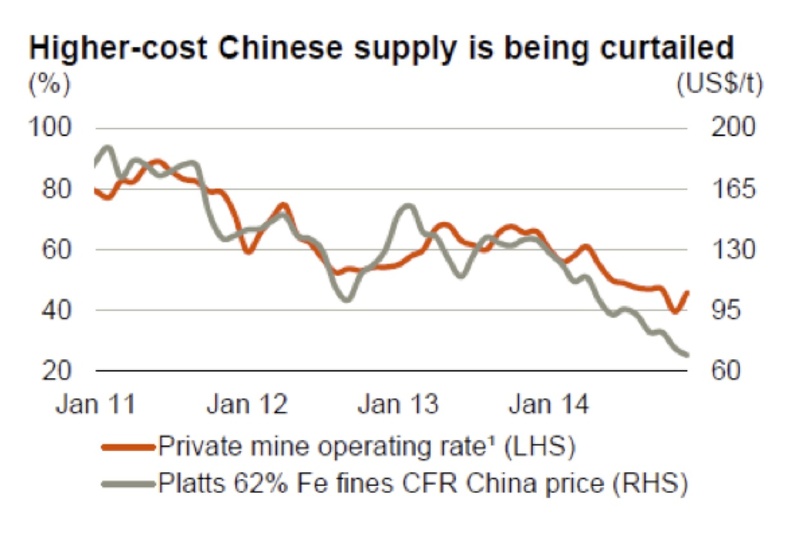 Next, they say that China’s steel production will peak in the mid 2020s and plateau through to 2030. Further, they argue that after 2030, the availability of steel scrap will cause global demand for iron ore to decline. Both these factors point to some urgency to dig up the iron ore sooner, rather than later.

Finally, they say that “the cost curve will continue to flatten as growth in low cost seaborne supply outpaces demand, leading to more stable pricing”.

Is this code for lower prices?  If supply continues to outpace demand, don’t prices have to fall? Pricing might be more stable – but at a much lower level.

The thing I can’t get with the discussion around pricing is the magnitude of the price fall, from $US180 per tonne in 2011 to around $US60. Today’s price is roughly one third of the price four years ago. Global demand for iron ore hasn’t fallen away, it just hasn’t grown at the same rate, meaning that pricing pressure can only be a function of over-supply.

The question I would like to see BHP try to address is what change in production would take the price back to $US100, and what would this mean to BHP’s EBIT?

BHP’s messy history of acquisitions is demonstrated by its move into shale oil in the USA. Four years later, it is still bleeding cash, with capital expenditure in the half of $1.9 billion not able to offset underlying EBITDA of $1.4 billion. EBIT was negative with a loss of $US298 million.

With the short term outlook for oil prices un-favourable, BHP has cut into the capital budget. It will reduce drilling and development expenditure to $3.4 billion for the financial year (down 15% from the guidance of $4 billion), and cut the operated rig count from 26 to 16.

BHP has also taken off the market its Fayetteville gas acreage (unable to find a buyer at the right price), and decided to retain it in its portfolio.

Another acquisition, the potash business, is a similar tale. It lost $113 million, and consumed $305 million of capital.

So while BHP might be keen to cite the improving productivity of these businesses, they are both cash and profitability drains, and there is no clear articulation of what BHP proposes to do with these assets.

With a canny Scot at the helm, BHP is working hard to cut costs, drive productivity and optimise capital expenditure. The latter is expected to fall further, from US$12.6 billion across the group in FY15 to $US10.8 billion in FY16. This will represent a fall of more than 40% over FY12 levels.

At the same time, dividends have gone up - and will continue to go up.

So, while BHP has traditionally been thought of as a ‘growth’ company, in this new era of tight capital management, depressed commodity prices and the challenges in its iron ore and shale oil businesses, it is probably more accurate to think of it as a yield play. If you think commodity prices are close to bottoming – buy for growth. Otherwise, hang on to your holdings – and buy in market dips for yield.

(Important Note: The author and his super fund own BHP shares. The opinions above are general in nature and do not constitute formal advice – they do not take into account your financial situation, particular needs or investment objectives. Before acting on them, you should seek appropriate professional advice.)